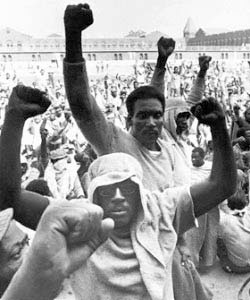 They were standing in the prison courtyard among hundreds of other green-clad inmates and guards when the shots rang out. Tyrone Larkins, age 23 at the time, was shot 3 times. Albert Victory, then 27, was shot twice, and later beaten, thrown down stairs and threatened in an attempt to get him to cooperate with authorities and “lie against fellow inmates.” Hundreds of inmates and guards were shot from above the yard. Then the National Guard, prison guards from nearby Auburn prison and New York State Police descended on the yard and “directly shot people,” said Victory.

If the retaking of the prison was horrific, the aftermath was worse. Hundreds of inmates were wounded. “They were not hospitalized,” said Victory. “They were put on trucks and allowed to bleed out. Only the guards were saved and offered medical attention.”

“Atrocities happened in that yard and the retaking of the prison,” Larkins added.

On Day 1, Governor Rockefeller and President Nixon took to the airwaves to “make the inmates look like they killed the guards,” said Larkins. But the inmates had no guns. Victory recounted that four days after the retaking the truth began to seep out: the guards were shot by other guards. At that point, according to Victory, the guard’s bodies were abruptly removed from the funeral homes in order to “hide bodies” and “cover up” what really happened.

When he objected to the whitewashing of the incident, “they threatened to kill the coroner,” said Victory. The prosecutor, who also had ethical problems with the cover-up and quit, ultimately  wrote “The Turkey Shoot” – his own account of the incident and its aftermath.

“Murders were committed during the process of retaking the prison,” said Larkins. He said there was a cover-up and believes that is the reason why the report was buried. “If not,” said Larkins, “they would have had to indict Governor Rockefeller and a whole lot of other people.”

Several inmates were put on trial for murders committed during the retaking of Attica. The prosecution gave up after they lost 3 or 4 trials, said Larkins. Only one inmate was convicted and he got clemency because, according to Larkins, “They refused to prosecute guards and state troopers.”

Prompted by a variety of stakeholders, including groups representing surviving family members of guards and inmates who died in the incident, NYS Attorney General Eric Schneiderman has submitted a request to the NYS Supreme Court to unseal the Final Report of the Special Attica Investigation (also known as the Meyer Report) on the 1971 uprising at the Attica Correctional Facility.

The AG’s application is now pending in the Eighth Judicial District of the State Supreme Court before the Honorable Patrick H. NeMoyer. Judge NeMoyer has advised that, following the conclusion of the submission process, he will set a date on which the application will be heard by the court. Written submissions can be mailed to Judge NeMoyer in Buffalo with copies also sent to Michael Russo, Assistant Attorney General in charge of the Attorney General’s Buffalo office.

“The release of the Meyer Report is mandatory if we are ever going to get a full and comprehensive understanding of what happened on September 13, 1971 and after when Attica Prison was retaken by state police, local sheriff’s office and prison guards. The public is entitled to know the truth,” said Eddie Ellis, president of the Center for NuLeadership on Urban Solutions, an independent public policy think tank in Brooklyn, formerly at Medgar Evers College, CUNY. “Our center fully supports Attorney General Schneiderman’s request to the [NYS] Supreme Court to unseal the report and encourage others concerned with accountability and justice to also do so.”

The September 13, 1971 Attica uprising was prompted by a litany of inmate grievances. Albert, a white Latino, said he witnessed countless “inhumane” abuses from the all-white prison staff including regular beatings of people with “nigger sticks” then isolating them in “the box”. There was no visitation or letter writing and inmates were limited to one roll of toilet paper per month. Located in rural upstate New York, Victory said there were KKK members on staff who gleefully imposed racial taunts on inmates.

Victory wants the report released and is interested in the sworn testimony, particularly from some members of the National Guard. “Some people were outraged, including some National Guard and prosecutors,” said Victory.

“Hopefully, the testimony will show the extent of criminality that they didn’t want the world to see,” he said. “We need justice.” If the report is released Larkins hopes to “learn the truth… if the report is truthful.” He wants to know why the report was sealed and why people were murdered.

Victory: “Clarity is needed to correct history. If prison guards… are responsible for killing their own and didn’t go to jail.”

Victory and Larkins state the Attica Rebellion did bring improvements in prison conditions. “There were changes made,” said Victory. “We got mostly everything asked for. But, he said, people forgot the lessons learned. Conditions are getting worse,” Victory said. College programs that allowed inmates to get college and sometimes postgraduate degrees were, little by little, taken away.