“Ladies & Gentlemen,” a bold, provocative assemblage of 20 major works by the British artist David Hollier, probes the ever-blurring lines between pop culture and politics—its power to transform and incite dialogue.

The exhibit will be on view at Sideshow Gallery, 319 Bedford, starting this Friday, June 30 (3p-9p). The show runs through 17th July, and the gallery is open every day except Mondays and July 4th.

This most recent collection is an eclectic mix of some of New York’s, and other, famous personalities. Hollier’s mega-pieces are 10ft high canvasses depicting, not only ladies and gentlemen but kings and queens from the world of music and politics.

The Sideshow exhibition pays homage to American political icons, important characters in the women’s liberation movement with a special nod to those who fought for women’s suffrage.

Included is a handwritten acknowledgment to Mary McLeod Bethune, also known as the ‘First lady of the Struggle’.  Ms. Bethune’s image is composed from her stirring 1939 speech: “What does American democracy mean to me,” in which, Bethune outlines her faith in ‘full equality’ and ‘mutual respect’.

Also pop diva Lady Gaga and hip-hop mogul Jay Z with his superstar wife Beyonce loom large in the presence of the Declaration of Human Rights rendered in the image of Eleanor Roosevelt.

Born and raised in Wolverhampton in the U.K., contemporary artist, David Hollier now resides in Brooklyn and works from his studio in Queens, New York.  He is known, here and abroad, for his epic street art pieces that exemplify his early training as a muralist. His work has been described as “a visceral response to his deep inquiry of global politics, theology and the status quo.”

Our Time Press first met Hollier Sunday, April 30 of this year when he joined community residents in the painting and refurbishing of park areas at the Eleanor Roosevelt Housing Development. (See photo of Collier with activist Bruce Paul in OTP’s May 4-10, 2017 issue/Vol. 21, No. 18, page 8.)

The Eyes of the Beyholder … 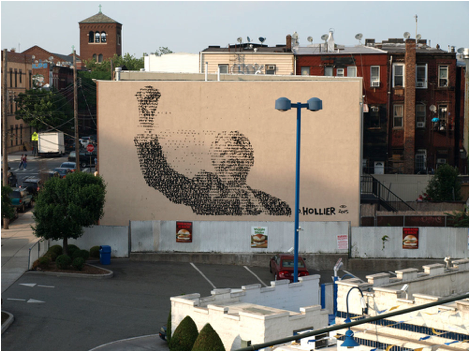 Power to the People … Hollier’s majestic rendering of Nelson Mandela is located on Linden Avenue, bet. Myrtle and Wyckoff Street, behind The White Castle. To see a time-lapse video of this piece being painted go to www.ourtimepress.com or YouTube. (Information assembled by Bernice Elizabeth Green)