This case study is part of a collection of pages developed by students in the 2012 introductory-level Geology and Human Health course in the Department of Earth Sciences, Montana State University. 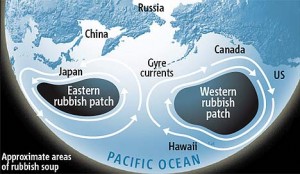 Over a few decades, humans have managed to dump tons upon tons of garbage into the ocean. Of the most devastating elements of this pollution is that plastics takes thousands of years to decay. As a result, fish and wildlife are becoming intoxicated. Consequently the toxins from the plastics have entered the food chain, threatening human health. In the most polluted places in the ocean, the mass of plastic exceeds the amount of plankton six times over. This is a large piece of evidence that leaves the problem of polluted oceans undeniable. It is upsetting that more of clean up effort is not taking place.

The Great Pacific Garbage Patch, also know as the Pacific Trash Vortex or gyre, is located in the central North Pacific Ocean and is larger than the state of Texas. There are also garbage patches in the Indian and Atlantic ocean. The patches are defined as containing a higher amount of plastic as compared to surrounding oceans. To date, five patches in total have been discovered.

Plastics are transported and converge in the ocean where currents meet. This means that huge plastic islands are made as a result. SES (Sea Education Society) scientists studied plastics in the Atlantic and calculated there are 580,000 pieces of plastic per square kilometer.

As far as plastic entering the ocean, about 20% of the trash comes from ships and platforms that are offshore. The rest sources from litter being blown into the sea, picked up by tides on the beach, or intentional garbage dumping. The worse part is, these plastics don’t biodegrade, so they brake up into tiny pieces that are consumed by fish and sea mammals. Plastic is killing more than 100,000 sea turtles and birds a year from ingestion and entanglement. To learn more visit Project Green Bag.

Plastics getting to Humans Impacting Health

Different plastics spread throughout the ocean. As Styrofoam breaks into smaller parts, polystyrene components in it sink lower in the ocean, so that the pollutant spreads throughout the sea column.

In fact, not only do the toxins in plastic effect the ocean, but acting like sponges, they soak up other toxins from outside sources before entering the ocean. As these chemicals are ingested by animals in the ocean, this is not good for humans. We as humans ingest contaminated fish and mammals.

As far as protecting yourself from contamination, it is probably best not to have a diet that consists mainly of fish, since most is probably contaminated. However, one of the most effective things we could all do as members of this fragile ecosystem is to be responsible for our trash. When we have the opportunity, we should try to avoid buying products packaged in plastic. We should always recycle plastic when we do use it. At the store, request a paper bag instead of plastic, or bring your own. Use a reusable water bottle, and of course don’t litter.