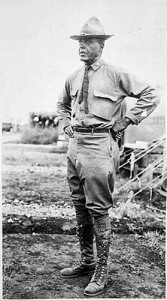 Assembling a group of African-American military brass and other dignitaries in Frederick, Maryland on a weekday was no small feat, particularly when they traveled from different parts of the country for the occasion.  Yet, distance had no boundaries for these men because the task would have a profound impact for generations to come.

They came together for a historic reason: first, a luncheon meeting at a quaint Frederick, Maryland restaurant, where they gave perspectives on Colonel Charles Young, an American hero, and how a monument in his honor offered a lasting tribute.

After lunch they traveled to sculptor Antonio Tobias Mendez’s studio in the rolling hills of western Maryland.  There, they inspected a clay model that Mendez created for the bronze casting of a maquette honoring Colonel Young, the legendary Buffalo Soldier, statesman and diplomat.  The end creation will be a monument erected in Washington, DC to acknowledge Colonel Young and the historic and honorable service that millions of African-American servicemen and servicewomen gave in defense of the nation.

Charles Blatcher III, Chair, National Coalition of Black Veteran Organizations (NCBVO) and the event organizer, reiterated the importance of this recognition.  “Born in 1864, Colonel Charles Young’s was an extraordinary life and career.  He stands as a great symbol, not only for black servicemen and servicewomen, but for all Americans,” Blatcher offered.

“The colonel’s father was a model for the possibilities, serving in the Union Army Fifth Regiment of the Colored Artillery Volunteers during the Civil War.  He planted love of country seeds and military service in young Charles who heard the call.  Despite great odds, Charles Young became the third black graduate of West Point Academy and rose to become the highest-ranking black officer in the United States Armed Forces from World War I until his death in 1922.  Among other achievements, Colonel Young was the first black Superintendent of the National Park Service, and the first black attaché to foreign governments, Haiti and Liberia,” Blatcher concluded.

Accolades like these are worthy of merit.   However, Colonel Young lived during a time when obstacles owed to his skin color were insurmountable.   The NCBVO is seeking to correct the history through working with other supporters to give Colonel Young the rightful receipt of an honorary promotion to Brigadier General. Others in the room agreed recognition of the highest order is long overdue.  Following are tributes from the gathering.