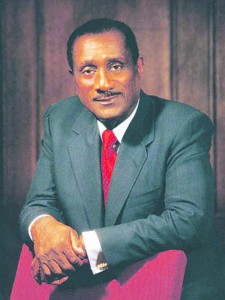 “I would tell [young people] to start where they are with what they have and that the secret of a big success is starting with a small success and dreaming bigger and bigger dreams,….I would tell them also that a young Black woman or a young Black man can’t dream too much today or dare too much if he or she works hard, perseveres and dedicates themselves to excellence.”  John H. Johnson
John H. Johnson took a $500 loan, using his mother’s furniture as collateral, and built what became a $500 million publishing and cosmetics empire.  For African-Americans the Johnson legacy is inescapable.
There’s not an African American born after 1945 that does not owe a debt to Mr. Johnson and his genius. His were pychologically healing publications, critical to the development of African Americans who, in 1945 when Ebony magazine first published, were only a couple of generations removed from the ground zero of emotional trauma, chattel slavery.
To people who were still subject to ongoing acts of random terror and constant discrimination, Ebony, along with Jet magazine, the newsweekly started in 1951, became beacons of what is possible.
As important as these publications were for adults, they were perhaps more important to children.  With large pictures and easily read captions, Ebony and Jet of the ’50’s and ’60’s provided early readers accessible  information about every “first” achieved by someone who looked like them.  This was the opposite of their everyday “Dick and Jane” schoolbooks with their all-white worlds.
Ebony and Jet magazines were in every Black barbershop and doctor’s office I could recall and I’m sure they’re still there.  As a child, I used to sell Jet magazines to folks coming up from the Kingston & Throop subway station after work.  I believe they  cost .35 at the time and I kept a dime.
Jeff Burns, Associate Publisher, Johnson Publishing Company, said of his mentor, “Failure was a word he did not accept.  That set the tone of determination around the company.  Ebony is and has remained #1 in its field.   Jet is also the number one newsweekly.”
Burns says that Johnson was “a giant in the business world” as well as a giant in the African-American community.
“The University of Texas  identified three of the greatest entrepreneurs as Henry Ford, Mary Kay Ash and John H. Johnson,” said Burns.  “His legacy will continue in Ebony.  It will continue at the fall groundbreaking for the John H. Johnson School of Communications, in a state-of-the-art building at Howard University.”
Legacy begets legacy.  Robert S. Abbott was founder and editor of the Chicago Defender. The first issue appeared May 5, 1905, and billed itself as “The World’s Greatest Weekly.”  After Abbott’s death in 1940, his nephew, John H. Sengstacke, took over the publication, and was a mentor and colleague to Mr. Johnson.
The Chicago Defender’s August 9th issue did that relationship proud with its “collector’s item” reporting of John Johnson’s passing.    The stories are available online at www.chicagodefender.com, and the issue will be reprinted August 28th.  Ebony also plans a commemorative issue for October, one month shy of the 60th anniversary of the magazine.   DG
John H. Johnson, media giant, dead at 87
by Karen Pride, Staff Writer,
Chicago Defender
John H. Johnson, the award-winning publishing pioneer and cosmetics mogul who used the pages of Ebony and Jet magazines to trumpet the stories of African-Americans for the past 60 years, and in turn built a $500 million media empire, died Monday at Northwestern Memorial Hospital. He was 87.
His story is a rags-to-riches tale. A man who left Arkansas for Chicago as part of the Great Migration, Johnson went from poverty and welfare to one of the nation’s richest men.

Johnson Publishing
Company: An empire built on valuing Black consumers
Analysis by Ken Smikle
Publisher, Target Market News
Sixty years ago, John H. Johnson single-handedly created the Black consumer market.
Before the introduction of Ebony magazine in November 1945, there were Black newspapers, and even a sprinkling of radio stations catering to the Black audiences. But for advertisers, especially those that were nationally recognized, the Black consumer market didn’t exist and the neither did the need to advertise to it.
Johnson’s first publication, Negro Digest, offered advertisers the first national media vehicle targeted to the Black audience. But the magazine’s lifeblood was the revenue generated from single-copy sales and subscriptions from the circulation of 100,000 monthly copies. While subscribers were plentiful, advertising was slim. So much so that Johnson decided to create his own line of hair products and advertise them in the same pages major advertisers bypassed.
With the introduction of Ebony, his second magazine, the budding entrepreneur established the first media vehicle capable of delivering color advertising messages to African-Americans coast to coast.

Johnson leaves imprint
on media industry
by Corey Hall, Chicago Defender
The foundation, established long ago by greatness, can only be emulated, never equaled.
That was the refrain of respect expressed by numerous publishers, writers, editors and media consultants who talked to the Chicago Defender about the life of John H. Johnson, the founder of Johnson Publishing Company, who died Monday at age 87.
Cathy Hughes, the founder of Radio One and the only Black woman to head a publicly-traded company, called Johnson one of America’s greatest entrepreneurs. “He was a pioneer and an inspiration for all who seek to establish a foundation and a legacy that will have, positive impact on numerous generations to come,” she said in a statement to the Chicago Defender. “He was my dear friend, my mentor, and the example of whom I aspire to be in the world of communications.”
Edward Lewis, chairman and founder of Essence Communications, Inc., noted how Johnson’s career made his success – and every other Black publisher’s – possible.
“He made groundbreaking strides with his magazines and was an inspiration to all of us in the business,” Lewis told the Defender. “He was one of the most candid and unvarnished businessmen I have ever encountered in my 37 years in media. His legacy will continue under the leadership of his daughter, Linda Johnson Rice. The death of John H. Johnson is a tremendous loss to the publishing world.”
Robert Johnson, founder/chairman of Black Entertainment Television, called John H. Johnson – no relation – “one of the greatest American businessmen of all time.”