People: The Big and Smalls of a Landmark: Something to Rap About

Could it be that a six-foot bronze image of the late rapper Biggie Smalls – intended by a local artist as a memorial to Christopher Wallace aka Biggie Smalls — will be the nexus for bringing awareness of a Big Moment in world history notoriously omitted from textbooks: that Africans were indeed in the Americas centuries before Columbus on the Nina the Pinta and the Santa Maria?

Please note the resemblance between artist Tanda Francis’ sculpture of the acclaimed rapper and the image on the cover of distinguished scholar Ivan Van Sertima’s groundbreaking classic, They Came Before Columbus: The African Presence in Ancient America.

According to DNAinfo.com: “A larger-than-life Biggie Smalls memorial could be coming to Clinton Hill.

“The Hip Hop Hall of Fame Museum is looking to install a 6-foot bronze sculpture depicting the legendary rapper’s face at Putnam Triangle, according to museum founder and chairman James “JT” Thompson.

“The museum, in partnership with Dennis Mathis, CEO of Down Lo Music, has set up a GoFundMe page in order to raise the $35,000 necessary to complete the proposed Biggie Memorial Project, designed by Brooklyn-based artist Tanda Francis.”

“The money would go toward finishing and mounting the project for an outdoor display, supporting the artist and sending a $10,000 donation to the nonprofit Christopher Wallace Memorial Foundation.” 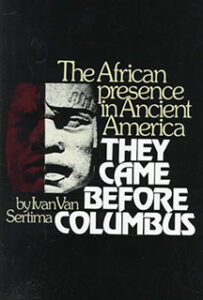 What may not be known is that this work that hopefully will stand at the gateway to Biggie’s neighborhood may also be a portal to a lost history that predates his life by thousands of years.

Ms. Francis, Washington, D.C.-born and Maryland-raised, lived on St. James Place in Clinton Hill, just steps away from the house where Notorious BIG aka Christopher Wallace, grew up.

Her inspiration for creating the huge statue — with the help of her husband painter and artist, Diego Anaya — actually came from passersby commenting on the resemblance of her then work-in-progress to Biggie.

Eventually, the artwork evolved into a full depiction of Biggie’s face. She noticed that tour buses stopped at the corner of Fulton St. and St James Pl. to allow tourists to see the house where the recording artist once lived; however, there was no visible landmarks or memorials to him.

Ms. Francis eventually connected with Mathis and Thompson and the rest of her Biggie story is now history. The trio is working to make her sculpture a permanent installation at the Putnam Triangle.

Upcoming events by artist Tanda Francis include the unveiling of 10′ x 8′ heads in an exhibit entitled “Everyone Break,” at Riverside Park in Manhattan, Thursday, June 16th at 4:00pm.

For more information and to donate to the BiggieSmalls Project, visit: https://www.gofundme.com/biggiememorial.