It’s been over 40 years since the controversial death of a Virginia man named Bruce Tucker. In 1968, the Black man sustained a head injury and went to Virginia’s top research hospital to be treated. Tucker slipped into a coma, his family was never contacted, and his heart ended up in the body of a white businessman. Chip Jones, the Pulitzer-nominated journalist and author, writes about the circumstances around Tucker’s death and the inequality in medical treatment in his new Simon & Schuster book “The Organ Thieves: The Shocking Story Of The First Heart Transplant In The Segregated South.”
Jones spent years looking into the story of Tucker’s death and the history of mistreatment of Black men and women in the world of healthcare. The author believes that now is the right time for this book to come out for several different reasons. 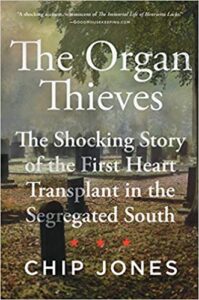 OTP: “What were the challenges encountered as you tried to gather evidence and facts for this story?
Chip Jones: First, there was no transcript kept of the 1972 trial! People from both sides of the civil case – the nation’s first “wrongful death’ lawsuit over a heart transplant operation – were very suspicious of this. This included Governor L. Douglas Wilder, who as a young trial lawyer represented the Tucker family in trying to get some form of compensation for their emotional pain and financial loss. However, it turned out that since the Tucker family couldn’t afford to appeal the jury’s eventual verdict against them, in Virginia there’s ’ no requirement to keep transcripts after 10 years. The transcript was destroyed – and any historical insights with it!
Thus I was faced with putting together a massive historical jigsaw puzzle of people, places, allegations, etc. I told the story using a treasure trove of sources — court records that were left behind; newspaper accounts; interviews with surviving attorneys, including Gov. Wilder; and the personal papers of the judge who ruled in the case, A. Christian Compton. (The book has LOTS of End Notes).

OTP: How did you come to tell the story, or what experience or discovery triggered your thinking that you HAD to tell this story?
CJ: As a person who came from a white, middle-class home, I simply had no idea of the long, gruesome history of injustice in the medical arena for Black Americans. So even though my research started in one direction – describing the first heart transplant in Virginia – I quickly realized I should apply my investigative reporting skills to answer the book’s basic, burning question: How could a black man’s heart be taken from his body in 1968 without any prior consent or the permission of his family? How could a modern-day hospital and its staff be so heartless?

OTP: Where do we African- Americans, and Americans, in general, go from here with this story/information in terms of health policy and medical?
CJ: I hope this can serve as a teaching tool to help everyone understand why there are still unresolved and lingering suspicions of the American way of medicine — another factor to consider, for example, in the near future when people are asked to take a vaccine to save off  Covid-19. Additionally, I hope The Organ Thieves helps to create more transparency by medical providers and awareness of everyone’s rights in healthcare settings. And I hope it sheds light on the continuing, often silent “historical trauma” many people of color grew up with and may still experience today, whether they realize it or not!

OTP: There are Black Lives Matter underpinnings — BLM didn’t matter to these people, but then it mattered when it came to saving a white life.  Chips thoughts on this observation.”
CJ: Yes, sadly, Bruce Tucker was treated as a second-class citizen – what was known as “a charity patient” – and his heart was removed without his family’s knowledge in order to save an ailing white businessman. The racial component of what was hailed by the white-owned press as a “historic” first for Virginia. But Black citizens often had a different take on the unfolding narrative as the unanswered questions that the Tucker family and Mr. Wilder were asking served to underscore many lingering suspicions and resentments toward the white-dominated Establishment. It seemed to be “more of the same” in a city that still had not desegregated its schools, housing, police leadership, and other sectors at the time of the operation in 1968. The secrecy that enshrouded the operation and its aftermath reinforced the idea that white people would be treated with more care, dignity, and respect than African Americans. This should NEVER happen again, and I’m glad to see that my book has sparked important conversations across the United States about the importance of listening, admitting faults, and improving our nation by honoring each and every human being!” (BG)
The purchase link to “The Organ Thieves” is: //www.simonandschuster.com/books/The-Organ-Thieves/Chip-Jones/9781982107529