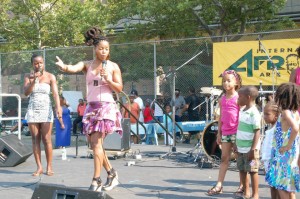 Our Time Press met Yaa Asantewaa, the activist, educator and actor, at several cultural events over the past few weeks and, each time, she spoke of two gifted former students, Ayo and Brandii, now conscious-rap hip-hop artists, going by the name of Blak Orfan. The young women debuted their new song from their upcoming album, “YBG” (To be Young, Gifted and Blak!), featuring Nina Simone to a captivated audience of all ages at the International African Arts Festival at Commodore Barry Park.

“As an educator, Blak Orfan fills me with pride and reminds me how rewarding it is teaching and loving Black Youth,” Yaa Asantewaa told us.

“Ayo and Brandii entered my 7th grade drama class articulate, confident and eager to learn. Thus, opening the door to our present relationship of mentoring, teaching, listening and friendship.

Both are now phenomenal young women. Ayo, driven by a “No Nonsense” Nigerian father who was not satisfied with his daughter just being great academically, but understood the importance of her being well-disciplined, respectful and focused.

“Brandii, driven by a mother whose high expectations for her daughter led her to school early one morning demanding an explanation as to why her daughter had received an 85 instead of her usual 95 or 100, this at a time when many parents were satisfied with a 65 or 70.

“It’s no surprise Ayo and Brandii became Blak Orfan, female rappers whose positive rhymes defy the expectations of a society that perpetuates and rewards the degradation of Black People.”

is a tribute to our late parents, Gigi Banks and Moses Akinsanya, who transitioned during our adolescent years. It is a musically influenced description of our lives after them; our worlds became our orphanage so we rhyme about our experiences trying to make it and filling the void with happiness. Being a Blak Orfan does not necessarily mean that you are a parentless child. A Blak Orfan is any person who has lost a parent, guardian or someone they looked up to (physically, spiritually, mentally, financially) and, as a result, felt alone in this world at a time when they needed guidance and love.

We are Queens, Making Change Happen …

is part of the evolution of hip-hop and we are on higher level – Queens. We call ourselves Queens because that is what we are. We’re just plain tired of being referred to as b*tches or hoes in hip hop music. There’s only one way to change it and that’s to make music that doesn’t refer to us women as such. We love and respect ourselves. Solely because we are women, we embody excellence. We are superlative and that is why we are Queens. As women in this male dominated industry we have an obligation to our young princesses. They hunger for someone they can identify with and with that in mind the degradation ends where Blak Orfan begins. This is what we should teach our daughters and sons. In the words of Lorraine Hansberry and Nina Simone “To be young, gifted and black… and that’s a fact!” This is something youth must believe!

On performing at the International African Street Festival …

It was an honorable moment, a rare experience. I pay homage to the efforts of its purpose because I (myself) am an African woman and I love my culture. I am the daughter of Taiwo and Modupe Akinsanya, both born and raised in Nigeria. As an artist it’s important to embrace my culture because it’s teachings is what made me who I am today. I grew up listening to Fela, Suny Ade and many other Nigerian artists as a child. I also used to sing a lot of spiritual Nigerian songs in church so performing at the festival was only natural, just in my own art form- hip-hop.

Our goal: to keep going …

: We feel very privileged: so many legendary artists have graced the stage over the years and it just gives us more hope knowing that we, too, can be legendary if we keep going. It was a great feeling being so well-received by listeners who REALLY had an appreciation for our culture and lyricism. We left the festival feeling like we helped change the minds and hearts of people who thought women in Hip-Hop, and Hip-Hop itself, had died a long time ago. Our goals are to continue to make music that uplifts our people and to start a revolution in the hip-hop community that brings the genre back to its essence.

Embracing the young, gifted and black …

And, with the youth in mind, we are planning to sponsor a child, an orphan in Africa where we invest in a child’s future in any possible way. As we evolve, we are always looking for new ways to make a positive impact in our culture.

To hear Ayo and Brandii, and obtain more information on their career and interests, visit: www.blakorfan.com