Our Time At Home: Getting to the Roots of Bad News … 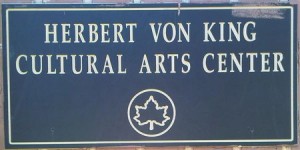 So it should come as no surprise that many residents are reeling from the news and the reality of its abrupt closure, April 13th, shutting down the after school program and dashing plans for summertime activities.

The effort, according to the Fire Department, was for good safety reasons: the fire alarm is faulty.

Yet, the community has raised questions that cannot be ignored. They are raising them in the spirit of one of the park’s greatest cheerleaders, the late environmentalist Hattie Carthan, who lived nearby and developed the neighborhoods first organized ecology with the park as a nexus.

Within the confines of Herbert Von King Park’s Cultural Arts Center, additional programs for  and by the people were born, nurtured and flourished; from family fests to encourage unity; to culinary workshops to establish careers; to bookfests and sing-alongs (most notably The Tree Tales project) to engage children in literacy and green movements.

The closing of the center, though reportedly necessary for life-saving measures, will not go down so easy in an elegiac fit.    Of grave concern to the community is, the Center will be closed for 18 months to two years.  Parks announced earlier that fall start of rehab and renovations would necessitate the closure.  So the whys and wherefores– in the light of gentrification’s low clouds — persist.

Our Time Press has sent those questions to New York City Parks & Recreation Department and the Fire Department of New York.  We will report those questions and the responses during this April Earth Month, when the nerve center usually is at its most forceful, brimming with ideas to enrich the community,  saluting spring and planting seeds..

Meanwhile, The Almira Coursey Amphitheatre, the park grounds, and the lavatories will be open to the public.  Following is the story that broke April 8 on www.DNAinfo.org.  (BG)

The city will close Von King’s Cultural Center for up to two years for necessary repairs to the fire alarm system and scheduled renovations.

BEDFORD-STUYVESANT — A Bed-Stuy community center slated to close down for renovations in the fall has had to close its doors early after the city found its fire alarm system was faulty.

The Herbert Von King Cultural Arts Center had to call a halt to all of its classes on Monday, after FDNY officials inspected the complex in February and found it failed to meet minimum standards, the Parks Department said.

“Community safety is Parks’ first priority, and although we have attempted to identify a means to repair the fire alarm system at the Von King Cultural Arts Center, we have discovered that it is not operationally feasible in light of the upcoming capital renovation project,” the parks department said in a statement.

The agency had already been planning to close the building, located between Lafayette and Greene avenues at Tompkins and Marcy, for up to 18 months starting in October to accommodate renovations to the center’s multipurpose room.

The early closure is “in the interest of protecting the community,” parks officials said.
An announcement of the early closure at Brooklyn Community Board 3’s general meeting this week surprised residents, prompting one board member to call for a possible Kickstarter to fund expedited work within the building.

CB3 Chair Tremaine Wright said the board has a commitment from the Parks Department to press for an earlier construction date.

The space includes a dance room, computer resource center, arts and crafts room and auditorium. In addition to planned improvements such as a new stage, seating and wheelchair lifts, the space will now receive a “complete overhaul” of its fire alarm system, officials said.

The facility, housed in one of Brooklyn’s oldest parks, had to cancel planned classes. Among the classes on the roster include ceramics classes, fitness programs, Tae Kwon Do, musical theater workshops and teen programs five days a week.

Workers began clearing all items out the building starting on Monday, according to an employee at the center.

“For almost two years, that’s it, we’re out,” said one employee who declined to give her name.
The city agency will continue to offer activities in the park itself, including fitness classes, arts and bike riding. Those programs will resume in May and June, a spokesperson said.

Von King Park will also host a Kids in Motion site in the summer from Mondays through Saturdays with free organized sports, games and demos. It is unclear if outdoor programming will continue following the end of the summer season.

The cultural center already saw cutbacks in operational hours and services late last year when the city ended a longtime after-school program due to low enrollment numbers.
In the meantime, local nonprofit 500 Men Making a Difference hopes to draw residents to Von King with an array of outdoor activities, according to founder Wayne Devonish.

The group, which has helped improve the cultural center through volunteer paint projects, is also spearheading a conservancy to spruce up the park.

“The cultural center is a vital piece of the fabric of the community where kids and families can go,” Devonish said.

“It’s definitely unfortunate that the official building won’t be operating for so long but hopefully we can work to involve the community in other ways.”
Devonish added that he is looking to move the center’s programs to Magnolia Tree Earth Center, another community outpost adjacent to the park.