Organized Resistance Grows against Fundamental Islam and Sharia in Mali 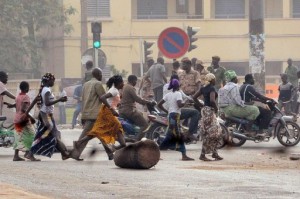 During the weeks since fundamentalist Islamic militants have taken over vast expanses of northern Mali, their intent to impose Sharia is clear. The visible destruction of several ancient Mali shrines, deemed World Heritage Sites by UNESCO, took the world’s breath away. Fighting, beatings, and harassment drove thousands across the country’s borders, into displacement camps. A couple accused of adultery were buried up to their necks, and then stoned to death. Women are being required to discard their traditional African dress for burkas. Young people are prevented from listening to music. The threat of cutting off a thief’s hand seems to be a turning point.
The Islamists have condemned one of their young recruits, a member of the Movement for Oneness and Jihad in West Africa (MUJAO). The recruit is accused of stealing weapons to sell. The punishment? Amputating his hand.
In response to the condemnation, hundreds of Mali citizens protested. When a radio journalist was beaten unconscious by Islamic gunmen during a live on-air report, Mali citizens held a second demonstration. The journalist has regained consciousness in a local hospital. Oumar Ould Hamaha, a spokesperson for MUJAO, confirmed the attack to the Reuters news agency. “We don’t care about secularism, democracy, the international community, or others. People must accept that we will impose Sharia whether they like it or not,” he said. “It is not tramps like journalists who are going to stop us.” But, published reports state the amputation has been postponed, for now.
Make-shift citizen militias are training to resist Islamic fundamentalists who have taken over the Tarueg resistance movement. Given a choice, the Tuareg had preferred to side with the Islamists when the Tuareg declared separation of northern lands from the secular government in the south. But now, the fundamentalists have given them no choice. The Islamists overpowered the secular Tuareg who practice a more relaxed form of Islam and declared uncompromising Sharia.
The citizen militias have no weapons, little knowledge of military theory or tactics, and nothing remotely resembling uniforms. The Mali Army, who initiated the coup on behalf of the Tuareg in the north, is of little help. It is preoccupied with citizenry in the south who do not appreciate the coup, or its aftermath. The coup itself was a spur of the moment opportunity; the Malian Army is not keen on challenging the well-equipped and determined Islamic militants in the north. The fledgling citizen militia, fed by the Malian Army, is a convenient buffer between the fundamentalists and the army.
What the citizen militias lack in weaponry, they make up for with determination. They are concerned about their relatives who could not escape. The Islamists are taking their daughters as spoils of conquest. Daily rhythms of life, such as women going to market alone, are forbidden by the fundamentalists. All told, there are 4,000 who are training to take on the Islamists. “Our goal is to liberate the north, whatever the price,” said one.
That price may be steep. Neighboring countries have pledged 3,000 soldiers to help oust the Islamists, for fear of the insurgency spreading discord to neighboring countries. Although Nigeria has its hands full dealing with Boko Haram, a violent Islamic sect, a spokesman for Nigerian President Jonathan said, “Nigeria is committed to resolving the crisis in Mali especially as President Jonathan is a co-mediator in the crisis.” Ivorien President Alassane Ouattata has announced that member states of the Economic Community of West Africa would also deploy troops in Mali soon if the situation did not rapidly improve. The Ivorien President who is also chairman of ECOWAS said, “If the (Malian) situation does not evolve positively and quickly, yes, there will be a military intervention in Mali. It seems to me inevitable.” The ECOWAS contingent would include soldiers from Niger, Nigeria, Chad and other countries, as well as Malian soldiers. The African Union is also seeking military intervention.
Any outside military assistance, including direct intervention, would require formal international support from the United Nations Security Council.
In the meantime, Malian fighters who had been recruited into Gadaffi’s Libyan army are well-armed with the best weaponry oil money can buy. After the fall of Libya, 2,000 soldiers returned to Mali, with stockpiles of weapons and artillery taken from Gaddafi’s arsenals. Members of the Boko Haram, who have a decade long history of violent attacks against the citizenry of northern Nigeria, including bombing of innocent worshipers during church services, were also in Gadaffi’s army and also obtained their armaments for Libya.
The international community is cautiously investigating the sources of financing for fundamentalist Islamists in Nigeria, Mali, and beyond.
The biggest concerns are that the vast northern Mali lands would be transformed into a haven and training grounds for al Qaeda while concurrently degenerating into lawless space for international drug trans-shipments. A bigger fear is that the instability in Mali could spread, destabilizing other countries in the region.