Bedford-Stuyvesant, one of the oldest and most prominent African-American communities in NYC, has been plagued with stories of crime and violence in its past, and now faces challenges of gentrification in the present-day. But Bed-Stuy is so much more than that – it is stories of families living and growing old in the same household for two or even three generations, or the stories of small businesses and neighborhood churches becoming local institutions. It’s the home of world-known artists, musicians and politicians who made a mark in the streets, halls and playgrounds of this diverse community. 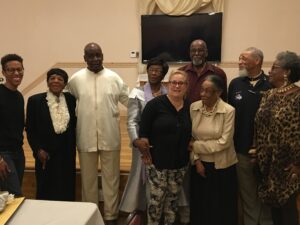 So it wasn’t surprising that the event hall of St. Phillips Church was packed with neighbors, friends and family members who came to celebrate the honorees for this year’s Stuyvesant Heights Oral History Project. On Wednesday, Sept. 13th, the Stuyvesant Heights Oral History Project, a coalition of members from four block associations, gathered for their 7th annual celebration at the historic church. Honored were six community members who, as lifelong residents of Bedford-Stuyvesant, had plenty to say about the neighborhood they called home. The Oral History Project, spearheaded by Mary Ann Monforton, a member of the Macon-MacDonough-Stuyvesant-Lewis Block Association, said the association was thinking about approaching the Citizens Committee for a grant and instead of focusing on beautification, they decided to do something more. “We were watching before our very eyes a changing neighborhood. Also, it’s a neighborhood that was generationally very deep. And we felt like we needed to preserve some of these stories before they were gone.” She said, “We started with the old-timers in our block association in the first two years, and then we went to other block associations and got their recommendations. Then to churches, and then some of the old-timers’ friends and that is how we got our honorees”.

There was a warm and friendly feel to the event, starting with a meal and then two songs performed by jazz singer and Bed-Stuy resident Patsy Grant.

Charla Harlow, the co-chair of the sponsoring block association, welcomed the audience as well as introduced each honoree.

The evening’s first presentation began with Herbert Sweat, a veteran and lifelong resident who shared stories about his childhood. Doreen DeLeon, one of the few non-natives, talked about being attracted to the brownstones and the culture. Eleanor Grant and Geraldine Jordan were both born and raised in Brooklyn and spent the majority of their lives in Bed-Stuy. Ms. Jordan was even married at St. Phillips Church and has been a member since 1932. Each woman received a proclamation by former City Council member Al Vann, on behalf of Borough President Eric Adams.

The final presentation of the night was for Clara Walker and her son Rachiim Ausar-Sahu.

Ms. Walker moved to Bed-Stuy from Georgia so she could go to school. She worked as a waitress at the world-famous McDonald’s restaurant, known for its “homestyle” cooking that attracted celebrities, jazz musicians and politicians in its heyday. After 20 yrs. of employment, Ms. Walker became the owner and managed the restaurant with her children, including her son Rachiim.

Her story, along with the other honorees, showed how each person planted seeds that grew deep into the foundation of this community and will forever be a steadfast part of who and what Bedford-Stuyvesant is to Brooklyn and New York. For more information about the Stuyvesant Heights Oral History Project and to listen to the stories of this year’s honorees and more, visit mystuy.org/oralhistoryproject.