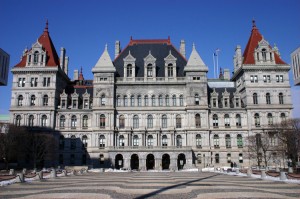 With the NYS Senate blocking popular reforms that voters want, Queens State Senator Michael Gianaris, chair of the Democratic Senatorial Campaign Committee (DSCC), is leading an effort to regain control of the Senate. “We expect there will be at least 32 Democratic Senators elected this November,” said Gianaris, “That will give us the majority.” The chief issue, according to Gianaris, is that Senate Republicans have allied with conservative forces in a progressive state to block minimum wage, reproductive justice, voter reform, ethics reform, and preventing the lieutenant governor from casting a vote in case of a tie.

The DSCC is targeting 10 Republican seats across the state. Gianaris said several seats are vulnerable for a Democratic win.

At the top of the list is Marty Golden in Brooklyn/Staten Island. “If you look at the Democratic performance in his district, he represents a very Democratic area that voted Democrat for every other elected official but him,” said Gianaris. “He hasn’t had an opponent in 10 years. He has just been living off of his incumbency.” Golden received national attention recently when his office announced a job preparation event that would teach young women how to “walk like a model.” That event was cancelled the same day it was announced due to public outcry. Andrew Gounardes, an attorney with Citizens Committee for New York City and a member of Community Board 10, is challenging Golden.

Greg Ball, who represents parts of Dutchess, Putnam and Westchester Counties, has “the single most conservative voting record in the entire state Senate as ranked by the Conservative Party,” said Gianaris. “He barely won last time; he won by less than 2% in a very big Republican year. This year, with Pres. Obama at the top of the ticket, we expect a much stronger Democratic turnout.” Ball is a member of the American Legislative Exchange Council (ALEC), which is notorious across the country for distributing draft legislation on voter ID, Stand Your Ground laws, antiunion legislation and anticontraception bills. DSCC is supporting Justin Wagner, Croton-on-Hudson attorney, against Ball. Wagner is endorsed by the No Bad Apples PAC which was started by Manhattan Sen. Liz Krueger in 2011 in the aftermath of Pedro Espada taking the Senate hostage

which shut down operations for a month. “We expect Greg Ball to go down in defeat,” Gianaris said.

DSCC sees the Rochester open seat as another opportunity. It was Jim Alesi’s seat, but he’s not running for re-election. Alesi was one of the 4 Republican Senators who joined 29 Democrats to pass marriage equality, incurring the wrath of conservatives in the process. Though Bloomberg promised to financially assist the reelection of any Senate Republican who voted in favor of marriage equality, Alesi is stepping down. Ted O’Brien, minority leader of the Monroe County legislature, “is very progressive and we expect him to win,” said Gianaris. “I see an open seat

that’s winnable, so we’re going for it.” The Republican candidate is Assemblyman Sean Hanna who is well-known but the district has a slight Democratic enrollment.

Mark Grisanti in Buffalo “shouldn’t have won the first time,” said Gianaris. “It was a fluke. He beat Antoine Thompson in a very unusual election. It was a recount that ended up being a 500-vote margin in a very Democratic district. He won because there was a whole series of local factors

on top of the national Republican wave that was taking place.” The Buffalo district was one of the most Democratic in the entire state. Grisanti lost support of the Erie County Conservative Party after he voted in favor of marriage equality. The DSCC is supporting Chuck Swanick. The Conservative Party has thrown its support behind Swanick, a former Erie County legislator who is a

Democrat who turned Republican then back to Democrat. With Conservative and Democratic ballot status, if Swanick wins, he will be one to watch.

There are two districts in Nassau the DSCC is looking at: Jack Martins and Kemp Hannon. The DSCC candidates are Dan Ross against Martins and Ryan Cronin against Hannon. “In Jack Martin’s district, the Democratic candidate had money left over after the campaign that could’ve been spent,” said Gianaris. “Martins defeated Craig Johnson by 451 votes in 2010.” In a

published report, Cronin said of Hannon, who has been in office for 35 years, “He’s been in office since 1977, longer than I have been alive. Career politicians are part of the problem.”

Gianaris said that in Suffolk County, Ken LaValle, who has a strong opponent, a woman named Bridgette Fleming, who is a Southampton Town Councilwoman and a former prosecutor. “We are very excited about her prospects,” said Gianaris. Fleming has the No Bad Apples PAC endorsement.

And speaking of women candidates, the DSCC has Cecilia Tkaczyk running in the new 63rd seat that runs from Albany all the way down to Kingston. Tkaczyk is a former senior legislative analyst and local school board president.

Back in Suffolk, for 82-year-old Owen Johnson’s seat the DSCC candidate is Rick Montano. Despite Owens’ position as the state chair of ALEC, there is major drama in Suffolk. Suffolk Democratic Chairman Rich Schaffer is backing Republican Johnson over Montano and declined to hold a Democratic County Convention for the express purpose of denying Montano

Bill Larkin’s seat in Orange County, in the Hudson Valley, is being challenged by Chris Eachus, a county legislator and a physics teacher.

Of those 10 seats Gianaris said, “Actually we only have to pick up two of those. There was a third one coming our way,” referring to the Super Jewish seat in Brooklyn where David Storobin won. “Simcha Felder is going to win in November we believe,” Gianaris said. “The fact is he is running as a Democrat. We expect him to win.”

The DSCC is looking forward to 32 seats, which would be comfortable enough so that there are no Democrats in Name Only (DINOs) like Espada. “The days of Espada are behind us,” said Gianaris. “The Senate Democrats never intend to go back to that kind of hostage-taking.” Gianaris added, “The people of New York are tired of those kind of Republican shenanigans. I think that anyone that plays those games and gets elected by Democrats then serves as Republicans are going to have to answer to the voters.”

Regarding voters who may find that with postredistricting, they may have a different state Senator. Gianaris suggested voters can call the Board of Elections, or they can call their local senator’s office to get that information. “An educated electorate is always best,” he said.

Gianaris is optimistic. “I think people will be coming out in bigger numbers to vote for the presidency this year,” Gianaris said. “I would just encourage them not to forget to go all the way to the end of the ballot to vote for state Senate as well. It is a critically important election.

We have the ability to make real progressive change in New York if we can pick up those two or three seats.”