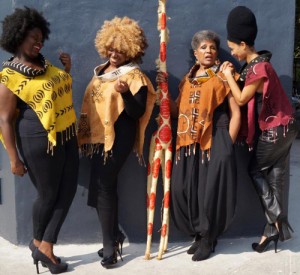 “Power and Sovereignty”, Boys & Girls High School, 1700 Fulton Street, Brooklyn, NY.  The Black Farmers and Urban Gardeners Conference connects growers, eaters and organizations across the country to nurture the health and well-being of Black America and the environment as a whole. Attendees explore issues of race, class, health and food through panel discussions, workshops, films and conversations.  Resources are exchanged. Keynoters are:  Monica White, Ph.D., Assistant Professor of Environmental Justice in the Nelson Institute for Environmental Studies and the Department of Community and Environmental Sociology at the University of Wisconsin-Madison & President of the Board of Directors of the Detroit Black Community Food Security Network; and Ben Burkett, President, National Family Farm Coalition. www.blackfarmersconf.org/

4 pm: Hip-Hop History Workshop for Teens: B-Boy & B-Girl Dancing with Kwikstep and Rokafella. The Schomburg Center celebrates Hip-Hop History Month in November with four interactive workshops for teens that will explore the four elements of hip-hop: MCing, DJing, B-boy/girl Dancing, and Graffiti/Aerosol Art. Knowledge, the fifth element of hip-hop, is at the root of each session led by pioneers and practitioners of the culture.  Presented by Schomburg Education as part of the Schomburg’s Hip-Hop 4.0 Initiative. FREE! Registration required!

Thru January 3, 2014: Noisy in the Next Room, Danny Simmons’ solo exhibition of new work at Restoration’s Skylight Gallery speaks to the heart and soul of human existence, providing a dramatic and compelling bridge between the past and now, we are asked to imagine a future where hope and revival are commonplace. His paintings operate on multiple levels of perception, employing commonplace practices of repetition and erasure, urging you to abandon the notion of up and down. The exhibit kicks off the 2013-2014 season of The Skylight Gallery. Hours: Wednesday – Friday, 11am- 6pm, Saturday, 1pm – 6pm. For information, call 718-636-6949.

Thru January 11, 2014: The Games We Played, a nostalgic revisit through art to the street and board games played by young people and families back in the day,  is an art exhibition at House of Art. While some games occupied the entire sidewalk, other games took up the whole street. There were also classic games played indoors when households still had family game night. This exhibition will showcase a diverse group of emerging-to-established artists with a multitude of genres featuring Guy Stanley Philoche, Jamel Shabazz, Dan Ericson, Charlotta Janssen, Leroy Campbell and others. 408 Marcus Garvey Blvd.