While many throughout the world esteem President Barack Obama for his pioneer efforts to forge global diplomacy in a post-Bush era, here in Bedford-Stuyvesant, Brooklyn, a faith-based troupe, backs up his every encounter with prayer, monthly at historic Mt. Pisgah Baptist Church.
The “O” Team has prayed through every major challenge and honor the President has accepted since he came to office a year ago.   And as the nation begins to assess Obama’s 360-plus days as a world leader, the “O” Team is preparing for the first anniversary celebration of their consistent monthly appeals to their Assessor to intercede for the President.  Praise services are planned for Monday, January 4, 2010, starting at 7:00pm in Mt. Pisgah’s Fellowship Hall, 760 DeKalb Avenue, Brooklyn, NY, as the President embarks on a new year in office. 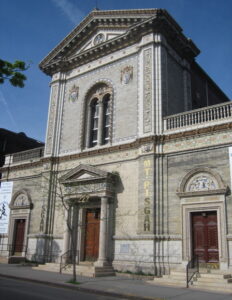 Under the auspices of The Rev. Johnny Ray Youngblood, the eleven-member core team of men and women, ranging in age from the early 20’s to 60’s, meet on the fourth day of every month, whether that date falls on a weekday or weekend.
“They arrive geared for deliberate intercession on behalf of Mr. Obama and his family, the office of the President, and even his White House staff,” says Rev. Youngblood who conceived the idea for an “O” Team – a group of modern-day disciples on a 21st century mission.
“Neither pressing reforms nor special honor escapes the intercessory efforts of the “O” Team; in fact, we vow to maintain our prayer vigils for the duration of Mr. Obama’s tenure as President,” adds Rev. Youngblood.
Even though the program commences at 7:00 p.m., there are those who arrive as early as 6 p.m. to secure the coveted front-row seats to experience the full breadth of exultant group prayer and praise that has come to distinguish Mt. Pisgah Baptist Church, under the guidance of Rev. Youngblood.
“Congregants and guests file in by the dozens.  They are loyal and have provided their support without fail since the program’s inception.  In a positive way, the prayer services have become infectious,” states Youngblood.
On any given fourth, worshippers along with the prayer team settle into the airy, Thomas-Spann Fellowship Hall that sits parallel to the church sanctuary.  Liberal seating is arranged for an anticipated one-hundred or more guests.  Nine massive columns painted a canary yellow and dark green – symbolizing joy and life – ensconce the area.  Music is piped in through huge woofers mounted on opposite ends of the stage.  Positioned close to the edge, at center stage, is a large projection screen from which the video stream of Lift Ev’ry Voice and Sing, the National Black Anthem by James Weldon and Rosamond Johnson, will soon project.  This is a staple video clip for the “O” Team.
At start time, 7:00 pm, on any fourth in the life of the program, chatter ceases throughout the hall.   The youngest “O” Teamer provides a slam poetry selection, and, without fail, the crowd goes wild.  A nine year-old reads a letter to President Obama in the tender voice of Sasha, the youngest Obama.  Tears well up.
At the December 4 session, eighth-graders of Mt. Pisgah’s George Henry Murray Preparatory Academy read letters (penned by their own hands) congratulating Mr. Obama on winning the Nobel Peace Prize.  The crowd marvels at their genius.  A petite, teenage girl sings the Lord’s Prayer in South African; this rendering is further accentuated with a South African drum dance, performed by an all-female troupe.  The crowd is astonished.
Last  August 4 on Mr. Obama’s birthday, the “O” Team celebrated with a message in the dialect of his Kenyan grandmother. There have been dramatizations, too.  One recent tribute was to 86 year-old Eugene Allen, who, after a 35-year career as butler in the White House, was honored to see the day the first black President assume residence in the iconic dome at 1600 Pennsylvania Avenue.
On yet another occasion, an operatic rendering of Exodus boomerangs off the hallowed walls.  Occasionally, the “O” Team will hand the reins over to worshippers to engage them in intercession for Mr. Obama.   The “O” Team takes bold steps to ensure there are no shortage of prayers and no spared talent.
“His administrative duties as Commander-in-Chief are frequently criticized and often minimized,” commented a long time “O” Team member.  “So our only choice is to pray.”  In fact, while so many remember the Obamas in their thoughts and prayers, the Brooklyn  “O” Team is probably the only faith-based group along the Northeastern corridor that’s committed to Mr. Obama’s spiritual welfare – with a dedicated service – on this magnitude.
Now ranked with legendary Nobel Peace Prize Laureates, Ralph Johnson Bunche, U.S. Diplomat and Politician and Reverend Dr. Martin Luther King, Jr., respectively 1950 and 1964 awardees, President Barack Obama is the third African-American to have the distinguished award conferred on October 9, 2009 – just nine months into his Presidency.  “True to style and grace,” notes Rev. Youngblood, “it is likely Mr. Obama considers the implications of the Nobel Peace Prize as ‘a call to action’.”
“We pray to an omnipresent, omniscient, omnipotent God who listens,” says a senior “O” Team member.  “We have prayed earnestly from our hearts for Mr. Obama’s success these past twelve months, and there is no shortage of evidence that our prayers are being heard and answered.  As more and more change comes about, the atmosphere at home and abroad takes on new fervor.  I would like to think it’s because of our prayers.
“Like the walls of Jericho, we must rebuild brick-by-brick and layer-by-layer both our international and domestic human relations.  The enormity of that task is achievable through prayer and, certainly, by having the appropriate person poised for the great undertaking.  We believe Mr. Obama possesses both the integrity and abilities.  That is why we pray constantly,” concludes the senior “O” Team member.
The group welcomes community participation, Monday, January 4, 2010.
(Note: When the fourth falls on weekdays, “O” Team programs are held from 7:00 to 8:30 p.m. When that date falls on a Saturday, the team convenes at 9:00 to 10:30 a.m.  Lastly, when the fourth occurs on a Sunday, their program is incorporated into the regular 10:45 a.m. church service at Mt. Pisgah Baptist Church.)

So, why did the “O” Team settle on the fourth of every month?  That date was selected to represent the significance of Mr. Obama’s birthday (Aug 4), his historic election (Nov 4) and of course he is the 44th President of the United States.