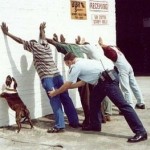 The 75th precinct in East New York topped the list, counting the most people stopped – 31,100 – followed by the 73rd precinct in Brownsville with 25,167. The two neighborhoods are also at or near the top of the most crime-plagued communities in the city. According to report only 3 percent of stops in East New York led to an arrest.
Also making the top ten list in Brooklyn was Williamsburg’s 90th precinct, home to Hasidic Jews, hipsters, and Latinos. The neighborhood was fifth with 17,566 stops.

The NYCLU was unable to provide data for the 79th and 81st precincts, which covers Bedford-Stuyvesant, but according to unofficial police statistics not counting housing or transit police, the 79th Precinct made 5,029 stops and the 81st Precinct made 7,458 stops.

According to NYPD documents, reasons for a stop include “carrying a suspicious object” or “casing a victim or location.” A frisk can also occur because of “inappropriate attire off season”

Marcy Plaza under construction
Residents shopping or living along Bed-Stuy’s Fulton Street commercial corridor may have recently noticed the pedestrian roadway on Marcy Avenue between Fulton and MacDonough Street torn up.
The reason for this city workers are constructing a $1.3 million, 8,000 square feet pedestrian space complete with benches, trees and shrubs.

The Plaza is part of the Bedford-Stuyvesant Streetscape Project and run through the Mayor’s Office of Comprehensive Neighborhood Economic Development (CNED).
Funding for the project came from the city’s Office of Management and Budget, Brooklyn Borough President Marty Markowitz and Councilman Albert Vann.

Bed-Stuy Park renamed and renovated
A portion of the Pulaski Playground running from Hart to Pulaski Street between Throop and Marcus Garvey Blvd was renamed the Heritage Row Playground in honor of the nearby 12 Heritage Row Houses built in 2000 by Habitat for Humanity, a not-for-profit organization seeking to create decent and affordable housing for families in need. The project was spear-headed by former President Jimmy Carter as part of his annual ‘Jimmy & Rosalynn Carter Work Project’.

In addition to the renaming an additional $1.45 million is being put into the park for the reconstruction of the asphalt multi-purpose play area with color seal coating, as well as a two lane perimeter track and two full-sized basketball courts. A fitness area, bicycle racks, benches, landscaping and perimeter fencing will also be installed, and the handball courts will be refurbished.
Funding for the project comes through the offices of Mayor Bloomberg and local City Councilman Al Vann.
Bill proposed to toughen domestic violence offences
Lawmakers in Albany this week introduced a new bill that would provide district attorneys with the tools to crack down on recurring violence and abuse by establishing the felony-level crime of “aggravated domestic violence” for abusers who commit two or more offenses within five years.

Under current law, only those who cause serious physical injury or kill their victims face felony-level charges. Even those who repeatedly commit domestic violence offenses can only be charged with a low-level misdemeanor — allowing them to cycle through the system and putting them back out on the streets again and again.

“Domestic violence is not a one-time occurrence. Nearly 40% of battered women will be victimized again within 6 months,” said Laurel W. Eisner, the Executive Director of Sanctuary for Families. “Under current law, an abuser can be arrested and prosecuted for dozens of misdemeanor domestic violence offenses, confident that he will serve little or no time in jail. The consequences are severe.”