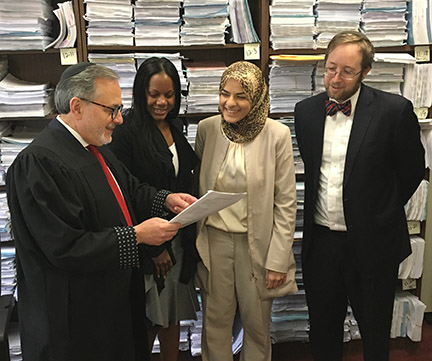 Foreclosure Court is the last place a homeowner wants to be. And if you’re there, it would be best to have a foreclosure lawyer at your side. “You wouldn’t go to a foot doctor if you have a problem with your heart” is how Judge Noach Dear put it. Dear is the presiding judge of the foreclosure resolution section, called Part 1, which is composed of Judge Dear, Principal Court Attorney Joseph Etra, Associate Court Attorney Monique Holaman, Assistant Law Clerk Deema Azizi and Court Clerk Suzanne Marsh.

A problem early on in the formation of Part 1 with its initial 14,000 caseload, was that defendants would often appear without an attorney or not appear at all. Dear had experience in civil court where nonprofits were able to have lawyers give assistance to those appearing without an attorney. He suggested that a way be found for nonprofits that provide housing assistance to be able to provide lawyers to advise defendants who have no attorney.

“There are so many good organizations that do great work,” said Dear, “that we wanted to bring them all together” and make it possible for there to be representation available for homeowners.   “Every day we have a different attorney from different organizations, and they are all one better than the other. They are fantastic.”  And while “there is no way they can take on every case,” they can give advice on how to find the way to a settlement. “And we’re getting more settlements than we ever did before.”

Monique Holaman said, “We had a meeting of representatives from pretty much all of the major foreclosure” agencies that service Kings County,” asking for their help. Because these agencies operate with limited resources and cannot take on all the cases presented, they must perform a sort of triage. Bypassing those that are too far gone and using their resources to help those where they see a deal could be made, and the home could be saved.

“If it looks like someone has a particularly good argument or someone’s financials are such that it looks like they will be able to amicably resolve the case, those are the cases they often work extra hard to take, because they can help,” says Holaman, who, as a member of the AKA sorority, offers foreclosure information sessions for the community..

Dear also noted that, “Initially, funding for the organizations to participate in the programs came from fines on banks during the housing crisis,” but that money has run out and while there are other funds coming to the helping organizations, more help is needed.

Dear said that State Assemblyman Joseph Lentol was “tremendously helpful” with funding and Chief Administrative Judge Larry Marks is also able to help with court system funds, for what Dear calls a “vital” service. “They’ve changed the lives of many, many people who would have been hurt,” because they didn’t have an attorney.

One of the court conferences we sat in on involved a homeowner who did not realize that even though she was paying her first mortgage, a second mortgage was not being paid and her house was in foreclosure. She said she never took out a second mortgage and yes, that looked like her signature, but she said she never signed it. This is just one reason why counsel is needed.

“At least from my perspective, the free legal service attorneys we have are amazing because they do this every day. And in some ways, they, at times, have been more efficient than the paid attorneys,” said Holaman. “They work with the banks, they deal with the banks, so that’s their world.”

Sitting at a conference across from lawyers Scott Kohinowski, City Bar Justice Center Director, Foreclosure Unit and Patrick Pyronneau, Supervising Attorney of the Foreclosure Prevention Program at CAMBA, was an education in what their world looked like and how important it is to have the correct legal counsel. And correct legal counsel doesn’t mean a lawyer who does criminal law, or one who does house-closings. Foreclosure law is a specialty and when you’re in a jam, having the right one will make all the difference.

During the conference, the defendants did not speak unless they were asked a question. They let the lawyers and bankers speak the language of modifications, post-modifications, loan-to-value ratings and valuations, while referring to the 2 inches of rubber-banded paperwork in each case, all to negotiate a payment plan to keep the homeowner in the home.

“Sometimes the numbers just don’t work,” says Etra. “In other words, if someone’s applying for a modification, they have to have sufficient income to support a modification. The banks will often be willing to extend the terms of the loan, they will often be willing to negotiate a little on the interest rate, but if there is insufficient income even with those changes, to support a modification, then reputable defense counsel also tell their clients the numbers just aren’t here, this is not going to happen, we need to find a different avenue forward.”

Unfortunately, not all lawyers are reputable or competent. Judge Dear says, “We have a lot of times where lawyers did some terrible things and people are in a position that they lose their home.” Dear said they also have the attorney for the plaintiff bring someone from the bank.  “And not just from the bank, they have to bring someone with authority to see if we can settle.”

The banker’s presence can also bring in a human component to what are basically business decisions in which the numbers can be made to work, or they can’t.  “I’ve seen banks really take into consideration circumstances. We’ve had a lot of elderly situations, or where there’s a lot of kids–certain things where I’ve seen then, just try to work it out. I’ve seen them try,” said Holaman. “There is a human component.  Definitely. I just want to say that, because we’ve seen it.”

The court attorney, who is not allowed to give legal advice, mediates the session, asking questions of defendants, attorneys and bankers, clarify arguments and working to find common ground. Judge Dear only had to come over to the table once to put them back on track.

With keeping the home being paramount, answering any mail received is absolutely necessary. “If they receive something with a court date, don’t ignore it. You’ve got to show up,” said Joseph Etra. “Even in the conference part. It’s important to show up because the referee will read them a prepared statement from the Office of Court Administration that tells them some of their rights.

Deema Azizi reiterated the importance of responding.  “If you get a notice in the mail, you must respond,” it only gets worse if you wait.

The adjoining sidebar lists organizations to contact for foreclosure help. And if you lose the list, Dear says, “Call 311 and you tell them your house is in foreclosure. They will refer you to one of the organizations.”

Do not be embarrassed out of your home. Help is as close as your cell phone.