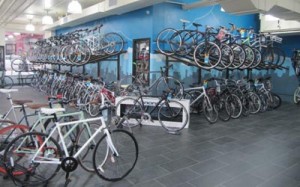 The bicycle shops of Bedford-Stuyvesant and Fort Greene/Clinton Hill this week gave unanimous thumbs up to the city’s rent-a-bike program that is officially expected to roll out early next month.

The public-private partnership plan dubbed Citi Bike because Citibank is its major underwriter will ultimately see 600 docking stations and 10,000 bikes where residents and tourists can rent a bike and pedal to another dock near their destination.

Thus far eights docks have been installed in the western portion of Bed-Stuy and several more in the central and eastern part of the community are expected as the program rolls out.

“I think it’s going to boon for biking in the whole city and I don’t personally see it hurting the local shops at all,” said Alex Picca, who opened the Bike Slug, which is mainly a repair and bike accessory shop at 1050 Bedford Avenue between Clifton Place and Lafayette about a year ago.

Picca said it is his understanding that there will be a fix-it shop for the rental bikes in Red Hook, and the city is looking for bicycle mechanics at the shop. However, he doesn’t see himself going to repair the bikes.
“I’m sure the repair work will be a management nightmare,” he said, referring to the collection and repair of the city’s bikes.

Brian Gluck, who owns Red Lantern Bicycles, 345 Myrtle Avenue between Carlton Avenue and Adelphi Street, said the program will encourage people to ride bikes more and also allow the rest of the city who are non-bike riders to become more aware of bicyclists.

“More bikes on the street means more awareness of bicycles for motorists and it will make it safer for everybody,” said Gluck, whose bike shop includes retail and accessory sales, repairs and a café that serves coffee, wine and beer.

“I think it will be great for congestion and a great alternative for train or taking cab. It will also become like a gateway drug for buying a bike because people will get sick of paying the rental fees,” he added.
The only owner that expressed some reservations is Henry Chang, the dean of Bed-Stuy bike shop owners as his Fulton Bicycles at 1580 Fulton Street and Marcus Garvey Blvd has been at its present location for 25 years.
“I think it’s a good program, but I’m not sure how it will turn out,” said Chang. “The other countries that the program is modeled after have been doing it for years and so the culture of biking is different.”
Chang said he doesn’t think the program will hurt his sales, and in fact might even increase his sales because it will encourage more people to purchase a bike.

Chang said customers have found some problems with the placement of bike racks to lock up their bikes around the city.

“Just today a customer came in to get a new lock because the one around his bike was snapped off in front of the Target Mall on Atlantic Avenue by security as it was chained to a lamppost instead of one of the city’s bike racks,” he said, adding the bulk of his business is in repairs where the profit margin is much higher than in sales.

Chang, who has several employees from the neighborhood, noted how the neighborhood has changed over the years from one that was mainly poor to becoming much more working class.

“Before it became more working class there wasn’t a lot of money in the neighborhood and many of the residents acted out from emotion,” he said. “On the upside when people with less money get a paycheck they tend to buy more spontaneously.”