Thousands saluted the life and pledged to carry the torch for James E. Davis, the slain Brooklyn Councilman of the 35th District, in the  spirit of the love by which he lived and dedicated his life. 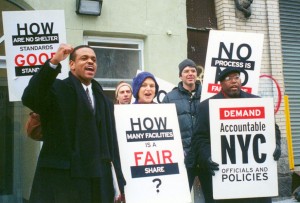 As President of the Glendale-East Flatbush Civic Association, a consortium of 40 area blocks in Brooklyn, Sharon Boreno is the “eyes and ears” for the assemblypersons and councilpersons.  She is close to the dynamic Councilpersons Yvette Clarke and Charles Barron, of course, knew Davis.  She stood on the sidelines at the Candlelight Prayer Vigil, in front of Davis’s American-flag swathed campaign headquarters at 633 Vanderbilt Avenue, down the street from Bob Law’s thriving restaurant.  She started her Young Leaders of Tomorrow program at around the same time that Davis formed his not-for-profit  “Love Yourself: Stop the Violence” program dedicated to halting the scourge that rages through the streets of urban America.
“The streets had gone amuck.  A young child was burned on the way to school, children were getting injured and shot,” she recalls.  Ms. Boreno’s, daughter Denise, was felled by a bullet which “tore apart her stomach and other organs, one cold day, coming from church.”  Her daughter survived.
Boreno stood near the Thompson family of Flatbush: Veron, the mother; Deval, father and their son Dayne, 16, a junior at Science Skills Center High School, who had met Davis at a Health Fair, three weeks before, through his mom.  “He said ‘Keep hope alive!’ He wanted to reach out to everybody.  You know how New Yorkers pass by without a smile. It would be hard for him to pass by without saying, ‘Hi!’ I’m always going to try as I grow up to have a smile, so I can show people the same love that he showed me when he was alive.”
Duke Saunders worked with Davis on an earlier campaign.  He said, “James opened the door and let people into his life because he was fearless.  He walked down dark streets, he had no fear of meeting people other people didn’t want to meet.”
The Rev. Clinton M. Miller of Clinton Hill’s Brown Memorial Baptist Church said that Davis was “more American than George Bush.”
Michelle Dotson, a childhood friend of Davis, brought her son.  She said, smiling through the welling tears,  “We were so proud of Rocky.  When he became a pastor, I called him Rev. Rocky, when he became a policeman, he was Officer Rocky.  I have to go home.” Dotson moved through the street to her home on St. John’s Place, down the block from House of the Hills Church where the viewing services were to be held the next day (Sunday, July 27).
During the night, other childhood pals Bruce Beattie of Crown Heights, a Tilden high School classmate of Davis, connected with other saddened  former Tilden Blue Devils of the school’s football team. They decided to give the converging media another “view” of their old friend Rocky.  They would bring old pictures and a 1970’s  Tilden yearbook to display outside of the House of the Hills viewing services.
“We wanted to present another side of Rocky,” said one of his former teammates. “He’s the councilman, the former police officer; we wanted show what he was before that.”  In the high school yearbook, Rocky with mile-wide Afro is sitting smack in the middle of a large group photo of the Tilden High athletic teams.  “I was his protector,” said a former classmate, who came in from Long Island.
More than 7,000 people lined St. John’s Place, across the street from St. Gregory’s where Davis attended elementary school.  The viewing began at 1PM and ended after 9PM.  A cordon of cars blocked off  the area around the funeral home, at the corner of Brooklyn Avenue.  The New York affiliate stations of every major television network set up camp all day, and conducted interview after interview with Beattie, his friends, Geoffrey Davis, James’ brother, and the ever-present anchor, Councilman  Barron.
The next day (Monday, July 28), the Davis family visited City Hall, and viewed their son and brother who lay in state at the foot of the staircase in the lobby of the rotunda.
Outside, thousands of people from all walks of life lined up to pay respects to the slain leader from noon to 4pm.    At a few minutes past 2, Susan Slater realized she was entering City Hall at about the same time Davis was shot there.  She shuddered and recalled how he once visited her church at her personal request. “And look at the lives he saved.”
The wake/reflections service occurred at Elim International Church later that evening   Jay Hershenson, CUNY’s Vice Chancellor of the University Relations for CUNY, later expressed to Our Time Press, “The wake was such an emotional experience, a profoundly emotional experience.”  Among the speakers was Sen. Hillary Clinton, who received a resounding ovation for her warm, charged, church-meeting words.
“As we pay tribute to this man, we pay tribute to  Mrs. Davis.  God entrusted her with  the responsibility and privilege of being James’ mother. 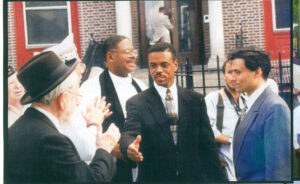