LEOLA MADDOX SPEAKS On Alton, On Life, On Being Black in America 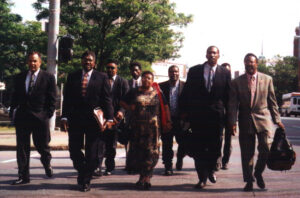 LEOLA MADDOX SPEAKS
On Alton, On Life, On Being Black in America

On the Trial:
I thought Alton was fantastic. Someone asked me earlier if I thought his closing remarks were his finest moment. I said no because although the summation was great, I would say his finest hour was the time he put himself on the witness stand and cross-examined himself in a Human Rights case. In the summation for this defamation trial he showed he had been paying attention. He wasn’t sleeping like Judge S. Barrett Hickman did through the trial at times. He brought out facts and evidence and discussed the issues. Stanton Steve Pagone’s attorney, didn’t. I thought it was key that he thanked the people who helped him in the case, including the people of the United African Movement. He said more than once in this case, “Had it not been for the United African Movement, the trial would have ended in November (1997).”
Pagones’ Wife:
She says she’s been suffering. I would like to tell her that if she thinks she’s suffering, she needs to know that I work two jobs. She works directly for her father-in-law. And I’m not saying this to be bitter. If Alton and I had to do anything over, we would do it the same way. As far as we’re concerned, when you go into a relationship and you know that that’s the kind of job that you want to do, you do what you have to do.

But her refusal to testify is interesting. She could have supported him. I feel she didn’t want to because she would have been caught in perjury. For her to say that she knew where he was, I believe is a lie! She would have committed perjury. And as a lawyer, that would have been a double whammy for her. As for this alibi — a photograph of his leg, he needs to go somewhere! Pagones worked as an assistant D.A. and he calls a photograph of his leg, an alibi?

Alton went to law school before we got married. His thing was, “You know that I want to work with poor people and you know there is no money in a law firm whose clients are poor.” He asked me, “Would you be OK with that?” So all of this was discussed prior to marriage, and when you go into it knowing the truth, that you’re not going to be rolling in dough, it doesn’t bother you if you have to sell hotdogs; you just sell hotdogs.

How has it affected me? When he lost his license that meant I had to go out and get a second job. I had to contribute more to the household. As long as he knew and I knew that what he was doing was correct, you don’t look at it as something that is affecting me. It’s just trying to make a contribution to what he was doing. That is the kind of law he wanted to do, it was never about making money. For Alton, it’s always been about what kind of contribution he can make to his people, and what kind of contribution he can make to children. He feels that children need strong role models, not role models who say, “Yes, Sir!, No Sir!, How high should I jump, Sir?!” And that’s why he said when they tried to take his license, ‘We don’t have to go through a trial.’ He could have done like Jessie and apologized. Two or three judges asked Alton to just apologize (for not revealing to a Grievance Committee information about his client Tawana Brawley). Alton said, ‘How would it look to children if I apologize and I didn’t do anything to apologize for.’ So he refused. They told him if he wanted to have this case ended all he had to do was apologize. Now my granddaughter, Malaysia, wants to be a lawyer. She’s tired of people picking on her ‘dindad’. She wants to hurry up and grow up so she can help him. My grandson is sure to follow Malaysia since she, being older, is his role model.

And my son, Charles, sometimes can’t stand for people to pick on his father. His daughter, Malaysia is a lot like him. He works for my husband. He doesn’t want to see people abuse his father, and he watches as his father sits there and just smiles. Charles, says he will never go into law. First Meeting: It was a blind date. Two of my colleagues I worked with decided I was spending too much time alone, so they said, ‘Don’t you want to meet somebody?’ It happened to be Alton. We met, we dated and we were married in three months, 32 years ago. We came to New York for one year in 1973 and we’re still here. We were supposed to be here for one year. That’s the biggest change in our lives. I would like to go back to Georgia, not that I regret being here.

Love of my race was instilled in me at an early age. The first time I had white teachers was in graduate school Up South in Boston, Mass. By the time I was in my 20’s, it was already instilled in me to be proud of who you are and you never met Can’t ‘cause Can’t died, according to my teacher, before they were born. We never had anybody who taught us anything different. Even in graduate school, I could see the difference. I could see that our children had a problem. Even in graduate school they would tell me I was doing “C,” “B” or “B-” work , when I knew I was doing “A” work. I was always taught to speak my mind and in graduate school I had a teacher who told me that the only black people who made contributions to our race were people with PHD’s like Dr. King. So I read him. I said to him in front of the class, “Have you ever heard of Fannie Lou Hamer?” He said, “No.” So I started to tell him about Fannie Lou Hamer. Needless to say that man gave me a “C” even though I did outstanding work — just because I embarrassed him in the class. I’m Black and he’s going to tell me who made a contribution to the race. Because he didn’t do any homework, the only Black leader he ever heard of was Dr. King.

Alton did give up his career for the Tawana Brawley case. They used Tawana as the case, but it wasn’t Tawana they wanted. I believe they wanted to get him for walking that Black kid out of the court for killing the priest. The press had convicted that kid in the newspapers before they had the facts, and then when the kid was set free, they didn’t know what to do.

I have degrees in History and Education. I minored in Library Science. It didn’t take me long to know I didn’t want to teach. I went back to school and got my library science degree. (Note: Mrs. Maddox is a librarian at Medgar Evers College in Brooklyn.)

I attended the high school of Manchester, Ga.. I went to Fort Valley State College, Boston State University and Simmons College. By having black teachers, we got a little more black history back in Georgia. Even though it was not in the books, these black teachers taught us what they knew. Also, in Georgia, the Black Teachers Association owned everything. Adam Clayton Powell told us not to vote to merge with the white organizations. The whites did not have a building; we had a building. Powell told us he would give it 10 years. He predicted the South will be like the North. He gave us a warning. He said there would be fewer black teachers.

Right after the Black Teachers Association voted to merge, a National Teachers’ Exam was instituted. All of those great, older teachers had to go back and pass those exams, after they had been teaching a hundred years! They told the old teachers they had to pass the exam with high grades. Right away Black teachers started leaving the profession. How were they going to pass this exam when much of the material had never been taught to them when they were younger. We lost so much when we lost them, the least of which was a connection to everything that makes us strong.