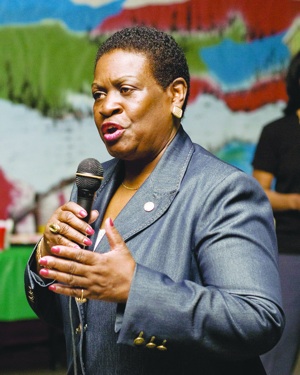 Paging Annette Robinson
Kings County Democratic boss Vito Lopez this week dispelled rumors floating around for several weeks that Assemblywoman Annette Robinson is retiring at the end of this term.

“I saw her and asked her about it, and she said, ‘Vito, I’m not leaving and I’m running,” said Lopez, the longtime Assemblyman representing neighboring Bushwick.

Lopez also chastised the rumors that she is retiring, as first broken in this column, saying someone should have asked Robinson.
For the record, KCP has been calling Robinson’s office for the past three weeks and the lawmaker alleged to be representing Bedford-Stuyvesant has yet to return a call to the local press.

Additionally, the most recently posted state news on her website is a two-month old press release regarding a $1 million state allocation for a Foreclosure Prevention Services program.

In any event, if what Lopez says is true, it will put a big dent into plans for a possible open primary with new community leaders.
Towns shows the money
The re-elect Congressman Ed Towns’ campaign committee raised $233,472 in the last three months dispelling any lingering rumors that the 76-year-old veteran lawmaker, who’s in great physical shape, is going out on his stool in the upcoming June 26th Congressional primary.

Towns faces Assemblyman Hakeem Jeffries, who has $235,962 in his campaign war chest and City Councilman Charles Barron, who has $15,860.
Meanwhile Democratic Party boss Vito Lopez confirmed he’s backing Jeffries contingent on if these are indeed the three candidates and the soon-to-be redrawn congressional district lines remain roughly the same.

This comes as no surprise to KCP as Lopez has long feuded with Towns.
The congressional race also opens Jeffries current 57th Assembly District seat, and both Democratic District Leaders Olanike (Ola) Alabi and Walter Mosley III are vying for it.
A close source to Lopez said the Democratic boss will endorse one of the two district leaders, and most likely it will be Jeffries protégé Mosley.

This includes Reyna’s chief of staff Antonio Reynoso, Borough President Marty Markowitz’s former legal counsel Jason Otaño and Vito Lopez protégé Maritza Davila, who’s also the female district leader.
Reynoso was born and raised in the district, going to the local schools and working for local business. Otano’s a lifelong Brooklynite, whose father was one of the city’s first Latino firefighters. Both have solid political experience.

Davila couldn’t be reached, but Lopez indicated she’ll probably be ready when the race kicks in gear.