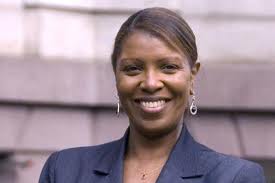 City Councilwoman Letitia James, who came up through the ranks of Central Brooklyn politics, is showing she intends on being a serious contender in next year’s public advocate race.

That after the Fort Greene lawmaker reported raising a hefty $217,000 in the past six months according to her recent filing with the City’s Campaign Finance Board.

The figure also passed the benchmark of having 500 individual donors, which means she remains eligible for a six-to-one public financing match once citywide election season officially begins next year. In total, James had over 800 individual donors with the average contribution being about $200, according to Joy Williams, her campaign treasurer.

Williams said less than 20 of the donors contributed the maximum, $4,950 to still be eligible for public funds.

Perhaps more importantly, James raised the money while going around the entire city and introducing herself to new possible constituents.

James said the commonality in all these neighborhoods is they all need a voice in government who will listen and be responsible and that’s what she will bring to the office of public advocate.

“As public advocate I will have the ability to correct government and stand as an independent voice for New Yorkers in conducting audits and investigations of abuse of government programs,” said James. “It’s the same thing I’ve been doing in the city council, but on a larger scale.”

While James, an attorney who started off in City Councilman Al Vann’s office when he was a state assemblyman, and who went on to work in the state attorney general’s office, is a rising voice in citywide politics, she will not be along running for public advocate.

Among those also considering a serious run are Senator Daniel Squadron, who reported net contributions of $308,000, and Reshma Saujani, a former top aide to current Public Advocate Bill de Blasio and who raised $276,000.

With the public financing deadline for the first six months of the year this last Tuesday, those expected to run for mayor all showed they will have large campaign war chests for the 2013 race to succeed Michael Bloomberg.

The biggest of these money raisers for the first six months of the year was current public advocate and Brooklyn’s own Bill de Blasio, who hauled in a $761,000 in contributions putting a total of $2.8 million toward his campaign for the city’s top political job.

While de Blasio raiosed the most for the past six months, his total still has a way to go to catch up to City Council Speaker Christine Quinn, who has raised $5.7 million towards the 2013 campaign, and Manhattan Borough President Scott Stringer, who has $3.67 million in in war chest.

Not to be counted out in the mayoral race is Comptroller John Liu, who hauled in $577,000 in the last six months and who has about $2.6 million in total for the race. Former Comptroller William Thompson, who lost to Bloomberg in 2009, raised about $500,000 and has about $1.5 million on hand.

While a lot can happen between now and the September 2013 Democratic Mayoral Primary, the thinking at KCP is no candidate will get the necessary votes to win outright, meaning the top two vote getters will have a runoff several weeks after the primary.

In so far as who these two candidates are, it’s still too early to tell.