Ken Thompson Battles Cancer Armed with Prayer, Faith and the Support of the People

On Tuesday, Brooklyn District Attorney Ken Thompson informed the community – through a statement — of his ongoing battle with cancer. And he requested our prayers.

“As a man of intense faith, I intend to fight and win the battle against this disease,” Mr. Thompson said earlier this week. “I humbly seek your sincere prayers as I confront this challenge and respectfully ask that you honor my family’s need and wish for privacy during this time.”

“We are praying for him as a father, a husband, a son, a man of the community as well as (the leader of the one of the nation’s largest prosecutorial agencies in the nation),” said New York City Public Advocate Letitia James before a crowd of about 150.

Borough President Eric Adams urged faith leaders present and across Brooklyn to devote this coming Sunday to Mr. Thompson. “This Sunday, October 9, is Ken Thompson Sunday. Let’s put a message of hope and peace out there for his family.”

Foy expanded the observance to include the entire weekend as a time for Brooklyn to focus on Thompson’s work, his advocacy.

The host of clergy present formed a tight collective embrace around Thompson’s staff and team, present, including Thompson’s chief assistant, Eric Gonzalez who is taking over as interim district attorney during Mr. Thompson’s “treatment and recovery.”

The news of Mr. Thompson’s illness comes three years after he was elected to office, running on a platform of reform and justice for all, and becoming Brooklyn’s first black district attorney. 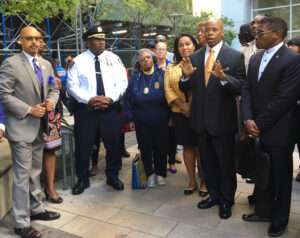 Controversy notwithstanding, Thompson’s work has saved lives, cracked down on guns and gangs, supported community law-and-order efforts, and helped to make Brooklyn, safer. “He has been consistent),” said Adams.

“And it’s a wake-up call,” he continued. “This is the time he needs to know we are here for him. We need to let him know, as he recovers, that “As you, Ken, have been there for Brooklyn, we are here for you.”