Katrina Evacuees a year later: Bed-Stuy Helps them on the Road to Self-Sufficiency 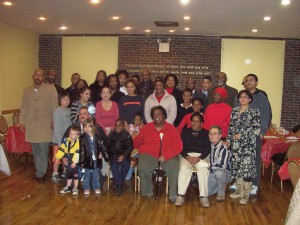 Waters have receded from Hurricane Katrina, and yet still caught in the backwash are over 250,000 former residents of New Orleans who remain scattered throughout the country, trying to rebuild their displaced lives.
But hard times are not unknown to central Brooklyn and for sixteen of the displaced families who made it here, there was a safety net put into place by those who knew how to do it.   The 36th Council District Katrina Relief Effort, organized by Councilman Al Vann, was woven together from existing institutions and programs operated by individuals with experience in helping those with disrupted lives.
“We share and recognize the devastation you have gone through and with all the problems we have in Brooklyn, we still found it necessary to open up our minds and hearts to you,” said Dee Bailey, Executive Director of the Black Leadership Commission on AIDS of New York City, at the second Katrina holiday program held December 19 at Restoration Plaza.
Family Dynamics Outreach Coordinator Kahdijah Suluki was one of those on the frontlines working with the families helping with housing, employment and helping guide them through the labyrinth of services available in New York.  Family Dynamics Executive Director Oma Holloway says that her agency, one of the consortium of agencies providing assistance, was able to have Kahdijah accompany the participants to the HRA offices to access the numerous benefits that are available.  They have also helped with MetroCards and other services as the survivors make the transition from surviving to self-sustaining.  “Kahdijah has been phenomenal in terms of helping to navigate the system to make sure the Katrina evacuees are receiving the benefits that they qualify for.”
One of the participants in the program is A. B., a widow originally from Bombay, India, she arrived in New Jersey in 2004 and was working and living at the Grand Palace Hotel in New Orleans in 2005, just in time to meet Katrina.  “When the hurricane hit, it was very scary and the food ran out after about three days,” said her son “Michael” (name has been changed). “It was a blessing just to survive the whole hurricane situation,” continued “Michael”, “and it has taught me to be more confident and has given me even more motivation to succeed.”  “Michael” is an aspiring automobile engineer who is now a 10th -grade student at Paul Robeson High School where he finds the teacher “excellent and very committed to their jobs.”    Eileen is now employed and they are living in a housing unit managed by Black Veterans for Social Justice.

We first met evacuee Veronica Ogden in September of 2005, three days after her arrival in New York.  At that time she told a crowd assembled beneath the tent at Restoration Plaza that she was from the 13th Ward in New Orleans and had originally evacuated from there “with clothing for three days because we thought we would be returning to our beautiful life back home.”
Looking back over the past year, Veronica said, “It was so inspiring when we came here last year to find so many people gathered to help the Hurricane Katrina evacuees and to be the recipient of all the support that was given.  Since then, it’s been up and down.  We’ve settled into an apartment building managed by the Black Vets for Social Justice and have a very nice place.  I’ve been traveling back and forth to New Orleans over the past year.  I was there for the mayoral election.  Also there for my interview with the Road Home Program.  But they’re dragging their feet.  I’m ready to return.  We’ve put a lot of our own money into gutting out our home but our roof is still not repaired.
“The government gave the states money to help homeowners rebuild but they are sitting on it and that’s what’s preventing us from going back.  Many people would like to return. I’ve done everything required of me and now we’re just waiting for Governor Blanco to release the funds so we can get the contractors in to begin rebuilding.  I hope the politicians in Louisiana get on the governor’s case before our property is declared blighted.  Because that’s what they want to happen.”
As a seamstress and fashion designer, Veronica was self-employed and operated her own business before the storm.  Speaking of the options she’s seen on her visits back home, Veronica says, “There’s a lot of work down there but there is no place to live.  The places that are available are at triple the original rent.  New York has been good to me and I’m so blessed to be here and we appreciate so much everything that has been done for us to make our lives comfortable.”

“The hurricane was a sobering experience to say the least, we felt we had been abandoned as Americans,. ” noted Ms. Ogden’s son, Alfred Tumblin.  We feel as if we just got off the boat in a new country and are waiting for citizenship.  We don’t feel like Americans.  After having pledged allegiance to the flag since being in preschool, you always felt that allegiance would be returned but I don’t feel that has been the case and that has broken my heart.  But as things progress and people help us get on our feet, we feel more like our old selves.
An aspiring novelist, Alfred was able to save the several computer disks that held his first work, Recession of the Magi.  He says it’s a “gothic” work about the descendants of the three kings in New Orleans.  “It’s 408 pages and was released in June.  Saving the disks and being able to use the few that were damaged “has given me a sense of accomplishment.” Web site: www.alfredltumblin3.com
Jesse Scott,  Class of ’64 Boys High Guys and Friends is a group of sixteen graduates of the old Boys High, a group of guys who give something back.
“We hope to have this evolve into an emergency preparedness unit for our community so that when we encounter a crisis or emergency, we’re ready to respond. So, something else is coming out of being helpful to our brothers and sisters.”
Both Job Mashariki, coordinator of the project and  CEO of Black Vets for Social Justice and Councilman Vann expressed understanding of those who are concerned that with so much existing need here in Brooklyn, that resources are being used to help new arrivals.  “We had to balance the help we gave them with those who said, We have problems and we’ve been here all along. But this grew out of our humanity as a community and from this we’re able to build an organization that will be better able to help our own community.
Seeing the failure of the federal government to be able to offer timely assistance, they pointed out that this experience puts into place a system of self-help that sharpens the ability to deal with a sudden local crisis.  Mashariki said that, “If we had to deal with a blackout, a gas explosion, a toxic train derailment, our community isn’t prepared for that.  We’re relying on the fire department, Homeland Security and outside sources.  So,  after this experience with Katrina we’re looking at what could happen and how we could be prepared for future disasters.”