Justice Loses a Giant in Brooklyn 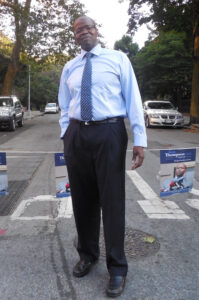 “Brooklyn has lost a true champion of justice. Our borough stands united in mourning the terribly untimely passing of Ken Thompson, a man who set a gold standard for public service that has had an lasting impact across our country. From enacting marijuana prosecution reform to addressing the open warrant crisis for low-level offenses, he has introduced much-needed fairness and compassion into our criminal justice system. Furthermore, Ken’s commitment to the law and to the well-being of our children and families made our streets fundamentally safer.

“Ken was more than my colleague; he was my friend. I am honored to be beside him in the storied history of Brooklyn as the first African-Americans to hold boroughwide office, and I know that many young men and women will reach a bit higher because of the heights that Ken reached in his career and his life. Let us all lift up his family and friends at this most difficult hour, and let us continue to support the men and women of the Kings County District Attorney’s Office who will further the mission that Ken Thompson laid out for our borough, city, state, and nation.”

“The NYU School of Law mourns the untimely passing of our distinguished alumnus, Brooklyn District Attorney Kenneth P. Thompson ’92. A talented attorney and dedicated public servant, Ken brought intellect, poise, and integrity to his office, and to the practice of law.  Ken served, and will continue to serve, as an inspiration for all who seek greater effectiveness, fairness, and justice in the criminal justice system – and, indeed, in society at large.

“The NYU Law community is grateful for his life and deeply saddened by his death. We extend our deepest sympathy to Ken’s family, and hope that his memory will uplift them, even in this most difficult time.”

“On behalf of the constituents of the 56th Assembly District I want to express my shock upon hearing of the death of our D.A. Kenneth Thompson.

“Kenneth secured his place in history as the first African-American elected District Attorney in Kings County. His zeal, tenacity, and desire for fairness in the judicial system lead him to work on behalf of those who were falsely convicted and jailed. His efforts resulted in the release and exoneration of 21 individuals.

“The tools that he used to make the District Attorney’s Office not only a place for prosecution but rehabilitation will be taught in law schools across the nation.

“I pray that the Family will be encouraged by the prayers of those who love and respected Kenneth and be comforted by the wonderful memories that they shared with him.

“Scripture reveals that earth has no sorrow that heaven cannot heal.”

“Ken Thompson was a devoted father and loving husband.  He built an incredible civil rights law practice founded on the principle of liberty and justice for all.  He served our city and the nation with great distinction; first as a federal prosecutor and then as the dynamic Brooklyn District Attorney.  And he was my friend.

“As District Attorney, Ken Thompson kept us safe, freed the wrongfully convicted, successfully prosecuted gunrunners, reformed the practice of low-level marijuana arrests and established groundbreaking, compassionate crime policies.  In a short time in office, he made a tremendous difference and he will never be forgotten.”

“I am devastated to learn of the death of my dear friend and colleague, Ken Thompson. Ken was a wonderful and committed public servant. In less than three years as District Attorney, Ken had an indelible impact on Brooklyn, our city, and our criminal justice system. Ken practiced law with a sense of fairness and respect for everyone in the courtroom and cared deeply and fought hard to advance the cause of civil rights. As an elected official, Ken embodied the highest ideals of public service, always doing what he believed was right, not just what was popular. Ken Thompson’s time in public office will shine as an example to those of us in law enforcement for years to come. My thoughts and prayers are with his family during this very difficult time.”

“We extend our sincerest prayers and condolences to the family and loved ones of Brooklyn District Attorney Kenneth Thompson. We are tremendously saddened to have lost a truly courageous soul who relentlessly championed for systemic fairness and lasting justice. We celebrate his extraordinary life and spirit and commit ourselves to following in his example of fearlessly pursuing equality or all.”

“All of Brooklyn is shocked and deeply saddened by the sudden passing of District Attorney Ken Thompson. His leadership in restoring vitality to Brooklyn’s top law enforcement office, and his commitment to justice for all were firmly demonstrated by his fight to free those who were wrongly convicted. Our thought and prayers are with his family, and his colleagues in the Kings County District Attorney’s office.

“Ken Thompson was an outstanding public servant who dedicated his life to the fight for justice. As Brooklyn’s first African-American District Attorney, Ken Thompson was a trailblazer who proved himself to be a fierce, unabashed champion for true criminal justice reform. From ending the prosecution of most low-level marijuana arrests to making it easier for Brooklynites to resolve outstanding warrants for low-level offenses, Ken Thompson didn’t just uphold the law- he made it fairer for all Brooklynites. DA Thompson was more than just a partner in government, he was also a friend, and my thoughts and prayers are with his family and the entire Brooklyn District Attorney’s Office as we grapple with this terribly sad news.”

“As the Council Member of the 35th District where District Attorney Kenneth Thompson called home, I am devastated by his sudden passing. We have lost an incredible talent with enormous potential. I took a photo with him at a local fashion show. When I look at it, it makes me smile. It reminds me that he never lost his desire to be among the people in order to stay connected with the community.

“Brooklyn District Attorney Ken Thompson was one of us. He fought with us and for us. To acknowledge the loss of this incredible man is immensely saddening, but let us be uplifted by the legacy he leaves behind. As the first African-American to be elected as Brooklyn’s District Attorney, a husband, a son, a father of two, a brother, and a fighter, he was an incredible inspiration to many, including myself. Ken has left behind an extraordinary legacy and has truly raised the bar for District Attorneys across this nation.”

“I am shocked, stunned and saddened by this sudden lost. Anyone who looks back at Ken Thompson’s entire body of work will find a successful, impressive man who was committed to social justice — from seeking justice for Abner Louima to exonerating more than 20 innocent people, he has proven his resolve to equity. My prayers for peace and comfort go out to his family, friends, coworkers and all who was touched by his life or work.

“There are no adequate words I can offer that can come close to soothing the wound that comes from losing a loved one. His death will leave a permanent void.

“I have no doubt that in the coming weeks and months there will be many occasions where we celebrate his life and work. I pray that God grants his family and friends strength in this period of mourning.”

“In his short time as Brooklyn’s District Attorney, Ken Thompson had a profound impact and helped to change the way communities of color see the office. By not prosecuting those arrested for low level marijuana possession and implementing a summons forgiveness program, while vacating convictions of those wrongfully accused of crimes.

“(He spoke) softly and had a calm demeanor. He successfully showed that District Attorney’s office can be a place of support and can work in communities to help ensure people have an opportunity to put themselves on the right path. We should remember Mr. Thompson for these traits and his many accomplishments. My thoughts and prayers are with his family in their time of mourning.”

“The sudden passing of Brooklyn District Attorney Ken Thompson is a tragic loss. DA Thompson was an incredibly committed public servant. His election as the first African American prosecutor in Brooklyn was historic, but the work he did while representing the people of Kings County is the true measure of his legacy. From day one, DA Thompson set out to best represent the interests of his borough and its diverse communities. He fought for what mattered most. He pursued unscrupulous landlords and struck at the heart of the violence gripping our long-underserved communities. He was everything we could have hoped for in a prosecutor, and then some.

“I hope his friends, family and colleagues can take comfort in having known and worked beside someone who wholly committed themselves to the betterment and protection of others. DA Thompson’s work is far from over. In memory of him, it’s incumbent upon us to see it through.”

Brooklyn District Attorney Ken Thompson had a tremendous career as a Federal prosecutor and worked on numerous cases of prominence while in private practice.  The community will never forget the bold initiatives he pushed in pursuit of justice as our District Attorne, including the Begin Again, a program to help those with misdemeanors get a second chance; and  his Gun Buy-Back initiative, which encouraged individuals to turn in guns, no questions asked.

“Today, we lost a father, a leader, and a man of unwavering faith. Thompson’s contributions to our community will have a lasting impact on the many lives he touched as a champion of social justice.”

“Mr. Thompson was elected as Brooklyn District Attorney in 2013, the first African-American to hold the position. He established several progressive initiatives during his short time in office:

a Conviction Review Unit that moved to vacate, or supported the dismissal of, the convictions of 21 people who were wrongfully convicted; and the groundbreaking policy to not prosecute low-level marijuana possession arrests, in order to spare young people from the burden of a criminal record.

“Prior to his election, Mr. Thompson was in private practice and worked as a federal prosecutor.

Closer to home, Ken was a resident of Clinton Hill, a former member of Community Board 2, the husband of Lu-Shawn Thompson, a CB2 appointee, and our neighbor upstairs, 11 floors above the CB2’s district office.

“CB2 expresses its condolences to Ken Thompson’s family and friends. The results of his leadership on criminal justice reform will live on in tribute to him.”

The Brownstoners of Bedford-Stuyvesant, Inc.:

“We have lost a champion for justice and a man of honor and integrity. We have also lost a Bed-Stuy neighbor and friend. Our thoughts and prayers are with his family and staff.”

“Ken Thompson was a voice for racial justice, and one of the country’s most progressive District Attorneys.  It’s very sad to see an individual who had so much to offer their community pass away so soon. He leaves behind a loving family, his colleagues and peers, and he leaves with the respect and admiration of us all.

“Many of my generation will look at D.A. Ken Thompson’s dedication to justice and civic life as a model as we carry out our own civic duties. Rest in peace, Mr. Thompson.”