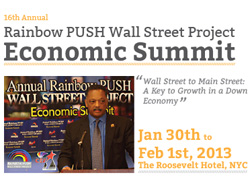 Yesterday, The Rev. Jesse Jackson, Founder and President of the Rainbow PUSH Coalition and The Wall Street Project, took time from his hectic schedule to talk to community media about the focus of the 16th Annual Wall Street Project Economic Summit, Wednesday, to be presented Jan. 30, 2013 thru Friday, Feb. 1, 2013 at the Roosevelt Hotel, 45 East 45th Street (at Madison Avenue) in New York City.

The Summit theme is: “Wall Street to Main Street: Economic Parity — The Struggle Continues.” The focus is: access to capital, career development and labor.

The Wall Street Project is challenging corporate America to end the multi-billion dollar trade deficit with minority vendors and consumers; while working to ensure equal opportunity for diverse employees, entrepreneurs and consumers.

Rev. Jacksom said, “The Coalition is moving on a plan for economic reconstruction.” While “the goal is simple,” he said, the task is great. “It’s about creating economic parity for our community,” which includes the homeowner facing foreclosure, the small businessman struggling to stay alive, the striver seeking career opportunities, the laborer seeking work.

And Rev. Jackson is set on making those voices heard, from Selma to the White House, and, reversing the theme, “Main Street to Wall Street.”

“There’s a lot of talk in Washington about the expanding poverty, racial disparities,” he said. And there should even be more talk on what can be done to meet the challenges, and howThe Street can help the streets of America.

At the forefront of creating ideas for and discussion around strategic solution is Rev. Jackson’s annual “Summit” project which brings together the nation’s leaders “from politics to corporations to entrepreneurs to to discuss the economic concerns unique to men and women of African American, Hispanic and diverse cultures.

“We know what Dr. King would be focused on today,” wrote Rev. Jackson in a recent column. “Nearly one in four children are being raised in poverty. More than 46 million people struggle with poverty in this wealthy nation. Nearly 18 million households are ‘food insecure.’”

“Millions are facing foreclosure. School budgets are being starved, even as jails are stuffed. An extreme and obscene gulf exists between rich and poor, with working families suffering mass unemployment, falling wages and increasing insecurity. There is a growing racial polarization as African Americans and Latinos, the greatest victims of the Great Recession, are the last to recover from it. Schools today are more segregated than they were in Dr. King’s time, but now no one talks about it.”

Highlights of the three-day conference include:
• Wall Street Project Career Symposium: Three-in-one career advancement session geared to strengthening professionals with the tools, insights, skills and resources to enhancing and managing career opportunities.
• Raising Our Voices On Advertising in The Marketplace: Corporate Marketing Officers and ethnic media representatives will discuss how their advertising and marketing efforts are meeting the needs of growing ethnic markets.
• Parity in Public Procurement Opportunities: A panel of state caucus chairs and federal officials will discuss best practices for accomplishing parity in public procurement, construction projects and management of public pension funds.
• New Development in Hedge Fund Opportunities: The session will focus on recent alternative investment trends, including federal regulation of hedge funds, barriers to minority participation, unintended hedges, pension fund liquidity, the endowment model, total return and payout ratios.
• The Business of Hip-Hop: This Forum is a must for all 21st century entrepreneurs and business owners of all backgrounds. Panelists will examine the positive impact and extensive business opportunities of an often misunderstood and overlooked business opportunity, Hip Hop.