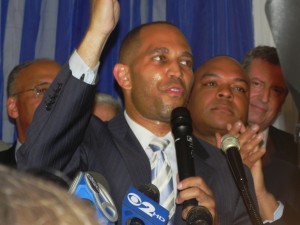 In a sleepy race that turned contentious in the final weeks, Assemblyman Hakeem Jeffries beat Councilman Charles Barron in a landslide. With 72% of the vote, Assemblyman Jeffries trounced Councilman Barron’s 28%. The unofficial vote tally was 25,880 to 10,090. When Barron ran against retiring Congressman Ed Towns in a 2006 three way, he received 15,000 votes.

Former NYC Comptroller and mayoral candidate Bill Thompson fired up the crowd at Sanders Studios when he declared, “NY1 has called the election and said that the next congressman from this district is going to be Hakeem Jeffries!” Thompson added, “We know Hakeem. He’s going to go to Washington and he’s going to work for all of us from one end of the district to the other.”

Jeffries’ entrance was met with thunderous applause. Surrounded by elected officials from all across the district, Jeffries addressed the electric crowd.

“You know, the political pundits said this was going to be a close race,” Jeffries said. “That was before the people had spoken. All across this district from Bedford-Stuyvesant to Brighton Beach, from Clinton Hill to Canarsie to Coney Island, from Ozone Park to Ocean Hill Brownsville, the people spoke in one loud voice and that is why we are going to Washington, D.C.”

At times, Jeffries seemed to channel President Obama and spoke of “tremendous progress in America” despite serious challenges. “We’ve come a long way, but we still have a long way to go,” Jeffries said. “We still have to deal with racism, and anti-Semitism, and homophobia. When I look all across the congressional district, there are people who are struggling — children trapped in a failed public school system, parents struggling with the crushing weight of a Yeshiva education and the high cost that is imposed on them, families in desperate need of affordable housing. We’ve got too many guns, and too few jobs. There are seniors who are struggling.” Jeffries said he believes that “public service and a government that is smart and compassionate can make a difference.”

Outlining his mandate, Jeffries concluded his acceptance of the voter’s mandate by saying, “Because of the efforts of so many people, I am going down to Washington to stand up for the education of our children, stand up for senior citizens, stand up for job creation, stand up for our civil rights, and stand up for our president, Barack Obama. Brooklyn, along with Queens, sent him a message today that help is on the way. We are going to help him help the communities of the 8

District leader Robert Cornegy assessed the vote in Bedford Stuyvesant. “We could see that Jeffries was doing well based on the numbers coming off individual poll sites. We were very pleasantly surprised at how well he actually did in the 56

th Assembly District, which is Bedford Stuyvesant,” said Cornegy. Referring to Bed-Stuy’s status as a battleground, Cornegy said, “Yes, we were considered the Ohio of this congressional race.” When asked why Jeffries did so well in Bed-Stuy, Cornegy said, “I think part of the difference may have been the very issue-based literature that people got in the mail. The Jeffries campaign was extremely skilled at running primarily an issues-based campaign. When residents got literature in the mail, it spoke to very pertinent issues whether in relation to housing or stop-and-frisk. Much to Bed-Stuy’s credit, residents are educated and they read.”

Hakeem Jeffries’ uncle, Dr. Leonard Jeffries and his wife Rosalind ,expressed love for both candidates.”We were blessed. We have two brothers who made sacrifices for our community. One who was a bellwether in raising issues and pointing out what needs to be done. Another younger one who got the best training possible and he was heading towards a quarter of a million dollars in income, but gave it up to come back to the community to serve. He was trained that way,” said Dr. Jeffries. “We couldn’t lose.”

In a virtual non-election, Congresswoman Yvette Clarke was re-elected with 88% of the vote against Sylvia Kinard. “I am honored and pleased to have received the overwhelming support of the people of the 9

th Congressional District,” said Clarke. I’ve spent a decade serving the community I grew up in, and I am thrilled to continue serving Central Brooklyn as their voice in Washington, DC. I will continue to fight for the issues I have always fought for: job creation, support for small business, fair immigration reform, quality education for our children and services for our seniors and working families.”

New York City’s senior representative, Congressman Charlie Rangel was re-elected with 45% of the vote against NYS Sen. Adriano Espaillat who was seeking to become the first Dominican representative in congress.

In a first for NYS, Grace Meng became the first Asian American female to win a democratic congressional primary with 51% of the vote.