“Dekawowo!” (Solidarity!) is the call to gather as the 47th Annual International African Arts Festival (IAAF) claims Saturday, June 30th – Wednesday, July 4th at beautiful Commodore Barry Park in Fort Greene as the place and dates during which it will once again steal hearts and lift spirits. From 10am till 9pm each day, rain or shine, those fortunate enough to make their way to the IAAF will take part in a cultural gathering that’s been at the forefront of summer fun since 1971, when it started out as a block party to commemorate the end of the school year for Uhuru Sasa Shule (Freedom Now School).

The event, then named the African Street Carnival, was held on Claver Place, which just earlier this week was co-named “Jitu Weusi Way,” after the founder/leader of The EAST, a Black cultural nationalist organization that created the school for the children of its members and for families in the community. One might be tempted to call this first one a “humble little block party,” but it was never that. It was an inaugural event emerging brash and beautiful, with stellar live jazz, electrifying African dance, wildly creative African style, beautiful faces, delicious food and joyful people. It almost immediately outgrew its location, moving to Boys and Girls High School for decades, and eventually to its current location.

This 47th year offers a great lineup, as always, this time with the inclusion of the First Annual African Documentary Film Festival, of which Weusi would surely be proud. Festivalgoers will enjoy a fantastic schedule of music and dance performances and workshops, an outdoor party with a DJ, a traditional African worship ceremony, fashion and natural hair shows, childrens’ events, a symposium, and more. Not to mention the merchants from across the globe selling paintings and sculpture, musical instruments, crafts, jewelry, culturally-inspired clothing, food, and more. See more information in this issue of OTP and visit The Festival’s website for schedule details. (www.iaafestival.org, or call 718-638-6700). The Festival is open 10am to 9pm each day, rain or shine, with a $5 suggested donation for adults and $2 for children.

As always, community support is critical for The Festival. Some people have assumed that the IAAF must have had deep funding to keep things going all these years. They see a continuing success in terms of attendance, programming and beautiful energy and assume that there is a secret pot of money somewhere.

But that was not the case. The community’s financial support during the Boys and Girls High years allowed for high-profile entertainment in the eighties and nineties. Gil Scott-Heron, Eddie Palmieri, Sun Ra, Lauryn Hill, Hezekiah Walker’s Love Fellowship Choir, Roy Ayers, Black Star and India Arie were among the many who performed for The Festival crowd. And Fela, Burning Spear, The Mighty Sparrow, Third World and others were flown in from across the world to captivate audiences.

Although The Festival still has fabulous entertainment, it can no longer afford the more expensive bookings it could at Boys and Girls High, when there was a low, but set, entrance fee. Each person who entered contributed to keeping it thriving. But when the school grounds were no longer available, the financial picture changed dramatically.

Because the IAAF is now held at a public park, it cannot charge admission, but ask only for a suggested donation. Although that amount hasn’t changed in decades, many people still decline to contribute. Some will put a single dollar in the box. Many walk by without contributing at all, although the suggested donation allows access to the grounds for almost 12 hours. Meanwhile, if someone sees a show at the Blue Note, he or she may be charged $65 and asked to leave when the first set is over. The Black consciousness movements at the time of The Festival’s inception were committed to supporting community endeavors. It’s hoped that we can once again safeguard what’s important by being responsible cultural consumers.

The IAAF remains one of the safest places to go for entertainment. Children can freely play on the grounds and there has never been people running from gunfire or the threat of stampeding crowds in response to other forms of violence. Instead, The Festival is known for the great happenings, like a child being born there, a wedding taking place and Stevie Wonder touring the event. It’s occasions like these, along with the everyday goodness of the vibes that keep Mark Scott and his family returning each year. 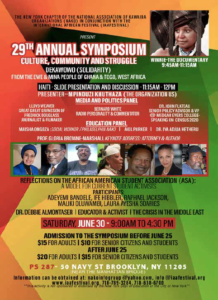 “My wife and I have been coming for about 18 years,” said Scott. “Our son was probably a little older than one year when we first started vending our business KhemitKids at the festival. We knew we needed the social, cultural and economic support that festival offered. It’s an incubator for all the things we need to grow our community. It provides safety for our ideas, nurtures our intergenerational relationships and continuity for our economy.”

Shukuru Sanders was an early member of The EAST and remembers the early events. She’s lived in California for decades now, but comes back to enjoy The Festival whenever she can. And for her, The Festival is, first and foremost, the people.

“I just love the Festival!” Sanders said. “I love coming to see family and friends,” Sanders said. “One of the smartest moves Jitu ever made, was when it came time to characterize our group, he said it was gonna be a family. To me, that was so important, because it changed the dynamic of how we all related to each other. Even though organization is very important, as a family it was even stronger.”

Bro. Kahamu is a longtime volunteer at The Festival and once vended there, selling books and Mama Abimbola’s famous carrot cakes.

“This is an example of the great work Jitu Weusi did for the community and I try to do whatever I can to help keep it going,” he said. “I work at the gate, greet the people when they come in and ask them for their donations. I’ve worked various volunteer positions there for about 40 years, I also attend various events around the city leading up to The Festival where I think large crowds of Black people are likely to be, and I distribute flyers to help publicize.”

Those who know and love the IAAF can help to spread the word as well and perhaps bring someone who’s never been. Commodore Barry Park is located on Navy Street, downtown Brooklyn between Park and Flushing Avenues.