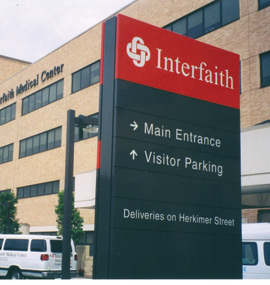 “We are in the process of doing a study,” Interfaith Board of Trustee Vice President Canon Diane Porter said. “The study is under the leadership of Brooklyn Hospital and it is funded by the state, that is being undertaken by The Navigant Group, a consulting company.”

According to Porter, The Navigant Group is responsible (over the next 14 weeks) for developing a recommendation as to whether or not it is feasible to merge, to affiliate or to share services. This study also takes into consideration how to best improve health care quality in the community either by free-standing clinics or by urgent care centers.

Working within the new cost containment that is being proposed all while working with the Affordable Care Act also known as Obamacare, are other factors that the hospitals are looking at as they make their decisions.

“We know that there will maybe be 200,000 additionally ensured Medicaid managed care people. With that whole environment, we are looking at ‘does it make sense for these three institutions to have some type of clinical integration and in the process what do we do with the overwhelming debt of the three facilities’,” Porter said.

Providing the community with the proper information to move forward in their own personal health care plans is important to the board as well as keeping them abreast of what is really going on.

“Between the three of us, we need to see what services do the folks in this community need most and we have to look at a financial model that sustains this. At the end of the day, it is really unclear until the work is done. We are not happy about this, but we know something has to be done.”

Porter said if the model does go as planned, workers should not be greatly apprehensive about the standing of their jobs at Interfaith. For the community, if the model works as planned and a series of free-standing facilities are created, this merger should improve health care, she said.

“I think the thing that we have to teach this community is that the emergency room is not your family care physician, and there is a certain convenience to the emergency room that is seductive,” she said. “That is a terribly expensive way for us to deliver care.”