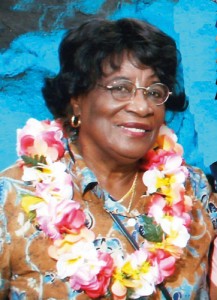 The mother of award winning Brooklyn-based musician and recording artist Bashiri Johnson, (percussionist for Whitney Houston, Michael Jackson, Sting, Sade, Madonna, among others notables) died on October 28th after a brief illness. She was 81. Barbara Elaine Johnson (nee Matthews) who lived in same family brownstone where her children grew up was born in Bridgeport, Connecticut on March 30, 1931 to Amanda Gurganus Matthews and James Matthews. Raised in New York, she spent part of her upbringing in Williamston, NC, and was baptized there. Later, Johnson became a lifelong member of First A.M.E. Zion Church in Brooklyn where her memorial was held.

“A mother’s love is organic love, the stuff that stars and universes are made of,” said the musician.    “My dear departed mother always blanketed me and the whole family with support, encouragement, confidence, esteem and endearment,” said the musician. “My mom taught me that giving in the service of others is the reward you reap in life’s wonders and blessings. Even through challenges and adversities my mom would always exhibit courage, grace and pragmatism.”

Among her accomplishments Barbara Johnson graduated from Hampton University with a degree in Nursing and obtained a master’s degree in Nursing from the State University of New York. She broke new ground as the first African American head nurse at Long Island College Hospital, and achieved the rank of assistant director of nursing at Greenpoint General, a private hospital in Brooklyn. At Harlem Hospital School of Nursing, and Mount Vernon Hospital School of Nursing, she was a member of the teaching staff. In addition, she contributed to adult education classes in NY and the Washington Irving HS Nursing Program. As a Visiting Nurse, Johnson attended to the musical legend Eubie Blake and the mother of noted performer Ben Vareen among her clients. She treated her patients with compassion, dignity and respect, and taught her students to do the same. Johnson retired in 1998 while working as a high school nursing teacher for the NYC Board of Education.

Mrs. Johnson loved to travel with family members especially her husband of 52 years Morris L. Johnson who preceded her in death. Together they enjoyed destinations such as Africa, Europe, and Hawaii; Caribbean cruises, oyster dinners in Ocean City and Virginia Beach, and scenic drives in the Poconos and back to her childhood Williamston. Johnson was an avid reader. She thoroughly enjoyed playing bridge, varied classes, and taking trips with her dear friends at the Brooklyn Senior Center.  In her younger years she enjoyed bowling, tennis, shopping and dancing. She was a Founding Sponsor of the MLK National Memorial Project Foundation, and contributed to numerous charities and foundations including March of Dimes, Disabled Veterans, National Committee to Preserve Social Security and Medicare, NAACP, and both presidential campaigns of Barack Obama.