Borough President Eric Adams recently indicated that he was considering pressing charges against Teresa Klein, 53, now known as Cornerstore Caroline. Although this label preceded her entry onto the public scene, she has by her actions, made it her own. In the process, she’s also made it a lightning rod and a cautionary tale. Fortunately for her, he called a meeting instead. 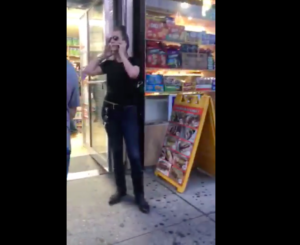 In a display that brings white privilege to mind for many and heightens the conversation around the ills of gentrification, Klein confronted nine-year-old Jeremiah Harvey and his family outside the Sahara Deli Market on Albermarle Road in Flatbush on October 12th, claiming that while in the store, he had sexually assaulted her. The child, distraught, repeatedly denied the woman’s claim as his mother, Someko Bellile, questioned Klein, whom people gathered around, loudly berating

Klein proclaimed that she was calling 911 and admonished Bellile for having poor parenting skills. Bellile tells her to go ahead and call, to which Klein replied, “And I am a cop!”

“I want the cops here right now!” cellphone video shows her presumably telling a 911 dispatcher. “That’s right,” the son grabbed my a**!” But Klein never placed the call, only pretended to, and she is not a police officer – resulting in Adams considering calling for impersonation charges.

Surveillance video was viewed the next day when Adams gathered all parties involved at the store, and it was clear that young Jeremiah was telling the truth. Because Klein’s back was turned, she could not see that it was his backpack that touched her. But unless hers was malicious intent, as witnesses speculated, it’s unclear how she would mistake the brush of a solid object for a grab by a small hand. Many parents in this community and beyond were enraged, citing the similarity to the 1965 Emmett Till case.

Klein apologized to the child after viewing the video. “I was wrong,” she said. “Young man, I don’t know your name, but I’m sorry.”

“I don’t forgive this woman at all,” said Jeremiah. “And she needs help.”

Klein’s neighbors, including a pastor who lives above her, say that she is a racist who has caused problems in their building. She has since called the cops on a New York Post reporter and a PIX 11 reporter, both of whom attempted to question her about the incident. She also says that Bellile was aggressive toward her and she plans to press charges.