Holding on to The Best Part of Bedford Stuyvesant — Its History, Humanity and "Hands" 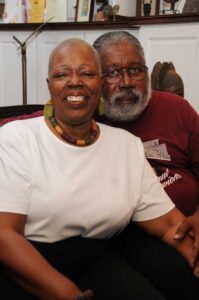 We bought our house on Chauncey Street in 1974.  A relative of a close friend lived on the block, and he made it possible for us to meet the owners, who were moving away.  We wanted our daughter,  Kenya,  to grow up in a caring and nurturing environment, and we chose Bedford-Stuyvesant for that reason.  Despite the relentless negative press, we knew that there were thoughtful neighbors, strong block associations, good schools, historic churches, active civic associations, and some of the most beautiful homes and apartment buildings to be found anywhere.

The house was a three family dwelling, and much of the detail was already gone.  It was a perfect palate for us to experiment with contemporary interior design. With guidance from architect, David Danois, we set about the first major renovation, which involved opening the second floor to the roof; moving a staircase; building a raised platform, constructing a loft bed, and creating a ground-floor rental unit.   The house is relatively small, and we had to find ways to take advantage of every inch.  Wilbert (“Fry”) did much of the work after the large projects were finished.  Perhaps the most compelling part of this phase in our lives was the help that we received from friends like Bernard Cooley, who helped with the dirty work of demolition and clean-out.  George Glee, Jr., Bernard McDonald, Clarence Jones, and Reginald Shell were among that group, and the Brownstoners of Bedford-Stuyvesant, a volunteer civic association,  was literally birthed in our backyard  after one of those work sessions. During that time,  we would work on each other’s houses, and then break for meetings that were held in the midst of busy toddlers, plaster dust and peeling paint.  You see, it was about making a contribution to this wonderful community, even more than it was about renovating a house.  We were fortunate  to have great activist role models to follow… Dr. Vernal Cave, Lucille Rose,  Montier Eason, Alma Carroll, Hattie Carthan, Joan Maynard, and Ruby Brent Ford (who was a guiding light in helping us organize the Brownstoners). Bed-Stuy Restoration Corp. was in its infancy, and was a visible and vital force in community development – rebuilding neighborhood pride at every level.  Those lessons of “giving back” still remain the bedrock of the work of the Brownstoners – thirty-two years later!  It was just the best time to live and grow with Bedford-Stuyvesant.  The best part … the great friendships that grew out of this love of community, and  which remain until this day.

Since those early days, we have done two more fairly large projects on our home…each one reflecting another stage in our lives. After Kenya left for graduate school, we opened her room to the adjoining bathroom and dressing room to create a comfortable suite.  The loft bed, with its own set of stairs, was replaced with a floor-to-ceiling glass wall that now encloses  a cozy bedroom.  On the parlor floor, a new breakfast room is now our favorite spot for morning coffee, Fry’s crossword puzzles, and quiet dinners. Custom cherry cabinets, silestone counters,  and stainless steel appliances were part of a kitchen makeover.  Now, in our retirement  years, we have updated the ground floor bathroom in Fry’s “man cave”, with a chair-height toilet and  a walk-in shower, complete with grab bars.  This entire floor can be converted into living space for the two of us when those flights of stairs become too much. 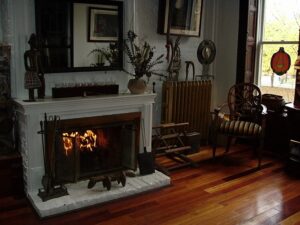 Needless to say, just about every room on the public floors in our home  has played host to one meeting or another.  Many times, in the hurried pace of my community work, Fry will cook a great meal, or give up his den for a “skull session” with this group or that.  We are blessed to have both of our mothers still alive, and in their 90’s.  As caregivers, we are learning that the love and support that we received throughout our lives, must be just as lovingly returned.  We have so many friends who are experiencing the same situations, and we share resources and strategies. . We gloat over our three year old grandchild; we travel, and we try to take care of our health.   We have our favorite eateries right here in the nabe…Sugarhill, Royal Rib House, and the new Mix-up Restaurant.  We try to make time to catch the excitement at Jazz 966 as much as we can.  This is Bed-Stuy, and we love it!

The house is here, but so is Chauncey Street.  We enjoy “stoop-sitting”, and watching  over  the children as they come and go, just as our neighbors did for Kenya. We can smile about Kenya and Donine Carrington, who grew up on this block, and who are still good buddies to this day…one in Maryland…one in Georgia.  They are just two of the many stories of our children, public school products all, who have gone on to make good lives for themselves.

Sometimes we look at the huge article from the New York Times, dated 1988, which hangs on one of our walls, and I chuckle. There are pictures of our families and homes and, of course, the expected   tale of gentrification.   Yes, we were “discovered”;  we were declared “safe”, and folks moved to Bedford-Stuyvesant.  Two decades later, we have been “discovered”,  once again. I am hopeful that the strands of this community’s  history; its struggles and triumphs, and the tenaciousness of its people in renewal and revival will not be lost in these cycles of “discovery”. 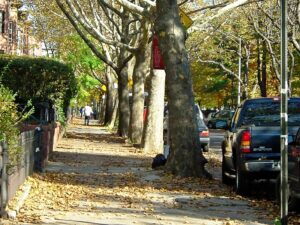 When Fry and I moved to Bedford-Stuyvesant, shops were owned by folks who lived in the neighborhood; property was obtained and passed down to the children; there was an unmistakable pride in who we were as an African-American community, and our churches, tenants’ groups in our public housing developments,  block associations, and civic groups were all tuned into the needs of every resident. Undergirding those precepts was an understanding that forces of destruction (infiltration of guns and drugs, unemployment, ineffective schools, health disparities, decaying housing, and unscrupulous developers) had to be dealt with in the most aggressive ways, and people took the time and energy to fight for Bedford-Stuyvesant.  Those times have come again, and the advantages and pitfalls should not be surprising.  However, I fear that the extraordinarily high  level of energy and commitment to continued revitalization – block association by block association, and neighbor by neighbor –  that has been the cornerstone of our survival, is being lost in a new paradigm which subtly diminishes our values  and  rich culture;  dismisses our institutions (public schools, community-based organizations, and civic groups), and marginalizes those residents who are determined to remain, amid rising housing costs. We need all of the new ideas, new drive, and hard work if we are to continue as one of the brightest jewels in this city’s crown of great, historic communities.

We helped to build NYC, and these next generations of hands are needed to sustain and enrich Bedford-Stuyvesant.  We must heed the simple and powerful message left by the many awesome men and women who guided Bedford-Stuyvesant’s renascence … everybody can and must contribute something.