UPDATE: Angola 3 member Herman Wallace has been released from prison in Louisiana after 42 years in solitary confinement. Supporters say he is en route to New Orleans to live out his days in hospice. Watch Democracy Now! for an update on Wednesday when we will be joined by fellow freed Angola 3 member Robert King, and by Wallace’s defense attorney, George Kendall. 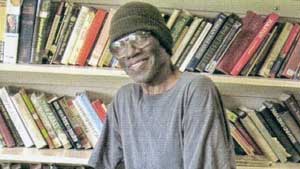 We received this statement from Wallace’s legal team:

“Tonight, Herman Wallace has left the walls of Louisiana prisons and will be able to receive the medical care that his advanced liver cancer requires. It took the order of a federal judge to address the clear constitutional violations present in Mr. Wallace’s 1974 trial and grant him relief. The state of Louisiana has had many opportunities to address this injustice and has repeatedly and utterly failed to do so.

A federal judge has ordered the immediate release of Herman Wallace, a member of the so-called Angola 3, who was held in solitary confinement for more than 40 years. The judge ordered his release because women were excluded from the grand jury in his case four decades ago, and called for “the State immediately release Mr. Wallace from custody.” The decision comes as Wallace is dying of liver cancer. Wallace’s supporters say he has just days to live, but his requests for compassionate release has so far gone unanswered.

Wallace reportedly received the news today from his two fellow members of the Angola 3, Albert Woodfox and Robert King, who had a previously scheduled visit. His lawyers are working now to secure his release as soon as possible.

“With today’s ruling, at long last, Herman Wallace has been afforded some measure of justice after a lifetime of injustice. We ask that the Department of Corrections honor Judge Jackson’s order and immediately release Herman Wallace so that he can spend his final days as a free man.”