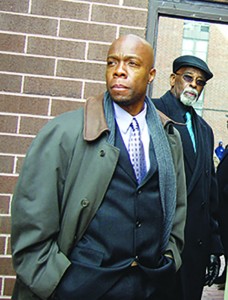 If a history of civic, community and business involvement is any indication then Bedford-Stuyvesant residents are in very capable hands with Community Board 3’s new chief administrator.

That after the CB3 board both accepted the resignation of its longtime Chair Henry Butler and then promptly hired him to replace the retiring Charlene Philips as the new district manager.

“As district manager, I would like to have issues resolved in a quicker manner and I plan on being a district manager that gets things done,” said Butler.  “If we see something or get calls – whether it’s about flooding, a streetlight being out or a park that needs cleaning – we will call the city agency and get it taken care of.  And with today’s technology, I will go out with an iPad and take a picture of the problem and get it done right away.”

Butler also vowed to work (in partnership) with all the local elected officials, whom he called crucial to maintaining city services.

In his new position Butler, who has served as the nonpaid CB3 Chair for the past seven years, will take over a yearly budget of slightly over $200,000 and the three-person CB3 office located on the second floor of Restoration Plaza. Besides being the community liaison in providing services throughout the community, the office keeps board members informed of developments, meets regularly with the various city agencies and works on such civic issues as rezoning and other land use matters.

Butler is a lifelong Bed-Stuy resident who was raised in the Tompkins Houses and currently lives in the southern end of the community. The position is also a continuation of a lifetime of civil service to the city and the neighborhood. A graduate of public schools, Butler received a bachelor’s degree from Hunter College and recently retired after 15 years as an MTA train conductor and union representative for transit workers. Prior to that, he worked in the city’s Administration for Children’s Services (ACS) and for NYCHA as the director of the Lafayette Gardens Community Center.

Besides being personally and professionally invested in making the community and city a better place in which to live, Butler has also recently become a business owner as he readies his Brooklyn Burger & Brew restaurant for opening in the near future. The eatery is on the corner of Ralph Avenue and Decatur Street. Community Board 3 Vice Chair Tremaine Wright, another lifelong Bed-Stuy resident and owner of the Common Grounds Coffee Shop (376 Tompkins Avenue), is replacing Butler as the interim chair.

Wright, an attorney, attended Duke University for her undergraduate degree and the University of Chicago Law School. “We’re excited to have a new district manager and I’m looking forward to this new coming year,” she said. The community board office is open to the public from 9 am to 5 pm, Monday through Friday. The phone number is (718) 622-6601. The next CB3 meeting is slated for 7 pm, Sept. 9 in the basement of Restoration Plaza.