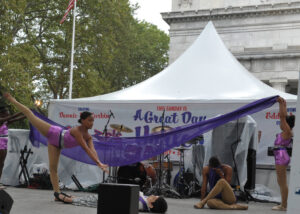 The rain didn’t stop thousands from attending “A Great Day in Harlem”, an afternoon of music, food and fun, July 31st at the U.S. Grant National Memorial Park on Harlem’s far west side. The annual event, which is the first big event of the HARLEM WEEK calendar, brought education and entertainment to the scores of attendees, like Harlem native Sheila Davis, who said the event was a highlight on her calendar. “I’m a Harlemite, and I come every year to celebrate my community,” the social worker said. “It’s good to see everyone and I love the culture experience.”

Attendees, including Manhattan Borough President Gale Brewer, sat out on the lawn at Grant’s Tomb for an afternoon of entertainment and education. MetroPlus – which is a third-year sponsor of HARLEM WEEK–was on hand to teach people about their eligibility for health insurance in New York, which is now mandatory. “Our push is to do as much community engagement as possible,” said Justin Allen, MetroPlus’s assistant director of marketing for northern Manhattan. “We make sure everybody has adequate insurance…it’s necessary, but a lot of people don’t know that there’s a penalty for not having health insurance.”
Concert-goers also stopped by the Family Technology Pavilion across the street in Sakura Park, where Central Park North Orthodontics – another HARLEM WEEK vendor – handed out toothbrushes and raffled a laptop computer as part of its back-to-school giveaway. “Every year, we always do a back-to-school raffle,” Sara Doyle, the office manager for Central Park North Orthodontics said. “We’re also letting people know about our services, which it braces for children and aligns with adults.”

The event honored iconic artists who have touched the lives of many in Harlem over the years.
J. Daughtry, from the cast of Broadway’s “The Color Purple”, sang a musical tribute to Donnie McClurkin, belting out the gospel singer’s songs: “I Call You Faithful”, “Holy” and “Nobody Like The Lord”. Ray Chew, who heads the Apollo Theater’s house band, later led a tribute to Levert as part of “A Concert Under The Stars”.  Pat Stevenson, publisher of Harlem Community Newspapers, Inc. and president of New York Black Media, Inc. said, “We are here today handing out our publications (Harlem Community News, Brooklyn Community News, Bronx Community News and Queens Community News), as well as newspapers of fellow publishers of the NY Beacon, NY Carib News, Our Time Press and Westchester County Press. Attendees were happy to be able to get copies of all the black-owned papers. And on behalf of the publications included as part of New York Black Media, Inc., I want to say that we are proud to be covering all of the HARLEM WEEK events and we thank our partners, The City College, The Color Purple Musical, Manna’s Restaurant, NJPAC, Infrastructure Engineering, MTA, Emmis Broadcasting, the NYC Police Department, Applebee’s, Carver Bank, Central Park Orthodontics, NY Road Runners, 100 Black Men, Apple Bank, Upper Manhattan Empowerment Zone, Manhattan Borough President Gale A. Brewer, HCDC, MetroPlus, City National Bank, McDonald’s, the Apollo Theater, NYC & Co., and the Greater Harlem Chamber of Commerce”.