Gentrification Forum Calls for Acquiring “Equity in the Land”

Practical and reasonable solutions were not planned. We can’t achieve anything just by talking about the problems.  If you don’t have the answer at your fingertips, give some information as to where to get it and follow up on it. We have to use our library, bcome an expert in that area of interest and make a collective difference.”
Richardson also said  that we must think collectively about everything we do. “What we can do collectively can make the difference. It’s not a ‘me’ issue, but a ‘we’ issue. ‘We’ must be economically independent as a collective to stop gentrification.
Richardson covered some crucial the statistics. “Let’s take the Administrative Children’s Services (ACS). The status is 70% black that are taken from their families. There’s the criminal and jail system population which is 85% black and Hispanic.  There’s the U.S. military and the homeless. Both disproportionately black.”
Jerry Muhammad, Nation of Islam, credited Elijah Muhammad with saying that gentrification is a form of genocide. ” We’ve lost our property, our lives, and our livelihood through the use of words. If you have the knowledge of self.then you become an “independent being” and therefore, refuse to allow white criteria to be the vehicle, which defines who you are. You have a “dependent identity” when you use something derogatory (ex., nigger) and incorporate it as something good.”
Muhammad stated, “We must ask for reparations in order to give the Caucasian the opportunity to atone for what they have done. We also want land, because we want full and complete freedom, because we have never been free in America-just a freed slave. Because they never gave back what they took, the damage done to us keeps us hating ourselves and keeps us from rising as a people.”
Attorney Malik Zulu Shabazz, national chairman of the New Black Panther Party for Self-Defense, president of Shabazz Real Estate emphasized, “Whites are taking over black communities with a process called gentrification. Everyday realestate deals are going on and we are not at the table. We know nothing about it. We must become property owners, we must invest.
“Once  I spend my money with the white man, that money is gone versus spending money on property. I spent too many years out of the real-estate business.  I was talking black power and making the white man rich. Let’s not think the game is being played fair.”
Shabazz urged, “Join an anti-gentrification coalition. Get involved and change the political process. Move from being tenants to owning some property. It is not just about gaining an immediate profit. Land is the basis of independence.
“When you have equity in the land, you have a much more powerful position. If you don’t deal with politics, politics will deal with you. We should have been on this (gentrification) years ago. Gentrification isn’t over til, it’s over. It only speaks to the urgency of what we have to do.”
Pastor Anthony Mann, Baptist Temple Church, stressed understanding the process of enslavement. “African-American” is not a word we should be using. We had civilizations long before enslavement.  We have got to stop coming from that “old-time” religion.  We must stop looking at others as God and respect each other as individuals.  Who cares about religion! It was given to us to keep us in line.
Pastor Mann also said that we need to stop saying we don’t need therapy. “We must get into a spiritual realm before we can get into any war. Until we stop being dysfunctional, we can’t make rational decisions. Don’t believe that people with the same color are always with you. We have learned to hate and hurt ourselves on a subconscious level and we have become immune to it. We have to first love one another. This process is not going to be an overnight thing.”
Pastor Mann implored, “Own something!, Cause it’s going to be valuable. We must own land! We must look at technology and computers. This is a global market. We should not have to ask the white man for nothing!
Minister Kevin Muhammad, Nation of Islam Mosque #7 said, “Land is everything.  Stop buying the jewelry and material things and get some land! You have everything on your ass, but you have no assets.”  Minister Muhammad insisted that, “We must pool our resources and learn to trust one another. Learn, study and become successful in everything we do.”
Self -examination is what is called for.  “What can we offer someone? What can we bring to the table? We need to have something! We have to get into property acquisition now!”
Dr. James McIntosh (psychiatry), a student of the late John Henrik Clarke, defined gentrification as corruptive, deceitful and nothing more than colonization. 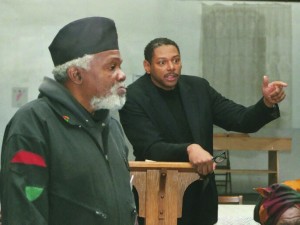 In his keynote address, Councilman Charles Barron, said the gentrification workshop was “right on time.”  Councilman Barron doesn’t believe it is a form of genocide as it relates to killing, but does believe re-gentrification or gentrification is another name for racism. “The white people know many of us can’t afford the high housing prices. Most black people’s income is in the $30,000-$35,000 range. Much of the housing is priced at $600,000 and up, therefore you can’t afford to buy a home. We are never eligible and that is where the racism comes in. They don’t kill you- they just price you out!” Councilman Barron explains what re-gentrification means. “Gentry” means elite. “Re-gentry” means to bring back the elite.  Re-gentrification means they were here before and now want it back, whereas gentrification means to move the elite in. The white population wants to come back to the inner cities and reside close to their businesses. This causes a displacement of the people who already reside there. We must fight it! Continue to organize and mobilize (collectively) around this issue. We need the power equation in New York to change because white men have too much power in this city. There needs to be a balance. We must make sure HPD (Housing Preservation and Development) changes their policies regarding affordable housing, quality and availability. Their (HPD) income requirements for purchasing a home are too high.
HPD, which is the largest developer of affordable housing in the nation, has provided over $5.6 billion toward rehabilitation and construction of housing.  (HPD) plans to spend at least a billion more. Half of that funding for should go to low-income people.”

Gentrification  is not an automatic occurrence just because whites and upper- class move in to a lower class or lower income area. There are certain conditions to be met in which gentrification takes place. First, there has to be a displacement of original residents in order to attract those who have a higher standing (elite). This is accomplished by making it unaffordable for the low-income people. Many of the upper-class people are attracted to the area. Second, there has to be a physical upgrading or renovation to increase property value and bring more business into the area or community- thus attracting more affluent people. Third, there has to be a change in character or flavor in a neighborhood in particular that no longer caters to the original residents, but now caters to a more affluent clientele.
To  understand the reasons why and how something takes place is one thing, but it is truly a genocide to embrace or ignore that which is bringing us down and preventing us from becoming mighty. We must take and hold on to what is rightfully ours and what has been with us for generations. We have come too far to stick our heads in the sand and pray the problem away. We have come too far to be self-important and egotistic. We can’t afford to be.
Artaymis Ma’at 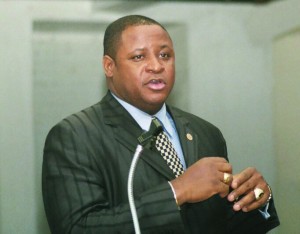