Three years ago, a single warning shot sent Marissa Alexander to prison. Last month, an appeals court overturned her conviction, ruling that the jury received flawed instructions on self-defense. Supporters are calling for the prosecutor to drop all charges rather than subject Alexander to a new trial.

As reported earlier in Truthout, Marissa Alexander, a mother of three and a survivor of abuse, had given birth to a baby girl in July 2010. The previous year, she had obtained a restraining order against her ex-husband Rico Gray. When she learned that she was pregnant, she amended it to remove the ban on contact while maintaining the rest of the restraining order. 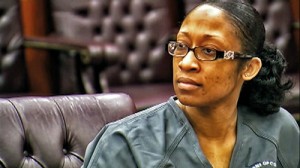 On August 1, 2010, she and Gray were at home when Gray attacked her. “He assaulted me, shoving, strangling and holding me against my will, preventing me from fleeing all while I begged for him to leave,” Alexander recounted in an open letter to supporters.  This was not the first time that he had assaulted her.

Alexander escaped into the garage but realized she had forgotten the keys to her truck and that the garage’s door opener was not working. She retrieved her gun, which was legally registered, and re-entered her home to escape or grab her phone to call for help. “He came into the kitchen … and realized I was unable to leave … he yelled, ‘Bitch, I will kill you!’ and charged toward me. In fear and desperate attempt, I lifted my weapon up, turned away and discharged a single shot in the wall up in the ceiling,” she recounted. Gray called the police and reported that Alexander had shot at him and his sons. Alexander was arrested and charged with aggravated assault with a deadly weapon.

Alexander attempted to invoke Stand Your Ground, but a pretrial judge ruled that she could have escaped her attacker through the front or back doors of her home. In a 66-page deposition, Gray admitted to abusing all five of the women with whom he had children, including Alexander. Several witnesses, including Alexander’s daughter, younger sister, mother and ex-husband testified that they had seen injuries that Gray had inflicted on her.

The judge instructed the jury that, when considering Alexander’s self-defense plea, that she had to prove beyond a reasonable doubt that Gray was committing aggravated battery when she fired. The jury deliberated for 12 minutes and returned with a guilty verdict. Prosecutor Angela Corey added Florida’s 10-20-LIFE sentencing enhancement, mandating a 20-year minimum sentence when a firearm is discharged.

On September 26, 2013, an appeals court found that the judge’s instructions regarding self-defense shifted the burden of proof from the prosecutor to Alexander. “At trial, the only real issue was whether she had acted in self-defense when she fired the gun. Because the jury instructions on self-defense were fundamental error, we reverse,” the court stated, remanding her case for a new trial. Marissa Alexander, however, remains in prison.

The campaign to free Marissa attracted increased national attention after the acquittal of George Zimmerman in the shooting of Trayvon Martin. News pundits and organizers compared her case – complete with the denial of a Stand Your Ground defense – with Zimmerman’s. “The Zimmerman verdict spiked attention to Marissa Alexander overnight,” Fire said. “In one week, we had thousands of new followers on our Facebook page and hits on our tumblr. There was outrage that, in the same state, Zimmerman killed a person [and got off] while Marissa fired a warning shot and got 20 years.”

“I believe that Marissa’s case got national attention because of the timing,” Bierria agrees. But, she adds, “we have to do everything we can to keep her name out there.” She points to the 2001 INCITE! and Critical Resistance statement on the divide between the movements addressing mass incarceration and domestic and sexual violence. “There’s been a depoliticization of work to end domestic violence and sexual assault. It’s been integrated into the state’s increase in criminalization and incarceration.” A decade later, she notes, “Black women are less likely to be the symbol used to provoke organizing against mass incarceration and police brutality. Also, instead of being supported, Black women survivors of domestic violence tend to be punished by the media, their communities and institutions. We have the opportunity to highlight the connection between domestic violence and mass incarceration. We can see it clearly with Marissa, but she’s not the only survivor in prison. This is an opportunity to bring attention to all the other survivors whose names we don’t know.”

For Marissa Alexander’s 33rd birthday, on September 14, 2013, supporters across the country held events to commemorate the day and draw attention to her case. “We had birthday parties, rallies and parades,” Fire said. In addition, supporters sent Alexander cards. “Marissa received 200 cards in one day,” she recalled. “Part of our peaceful protest is to get as many people to connect with her, to let her know that she’s not forgotten.”

Copyright, Truthout. May not be reprinted without permission.