Fort Greene and Clinton Hill put back in Towns’ district 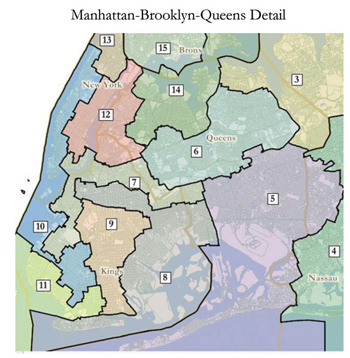 These northern neighborhoods are Jeffries’ constituent base in the Assembly.
The newly created 8th Congressional now starts in Fort Greene and Clinton Hill and gerrymanders east and south to include such traditional white neighborhoods such as Howard Beach in Queens before moving west along Brooklyn’s coast neighborhoods including Manhattan Beach, Sheepshead Bay, Brighton Beach and ending in Coney Island.

Under the new formula, if ultimately approved by a three-panel judge, both districts will have a slight black majority as per the federal voting rights district mandate.

“Judge Mann clearly acknowledged that keeping communities of interest together is paramount to a fair and just redistricting process and the court should be commended,” said Jeffries. “This is a victory for the residents of Fort Greene and Clinton Hill who will benefit from the preservation of historically African-American, central Brooklyn neighborhoods within the same congressional district.”

City Councilman Charles Barron, who is also in the three-person congressional primary on June 26, responded that he opposed Mann’s first and second proposal for the same reason – it only marginally gives a black majority.

According to data, Towns’ former 10th Congressional District was made up of 64 percent eligible black voters, and the newly created 8th Congressional District will have only 56 percent eligible black voters.
“These lines still reduce the number of voting-age blacks and Yvette Clarke’s district even has less blacks,” said Barron. “It’s a shame people only went against these lines for personal ambition reasons. I stood out against them on principle.”

Barron also pointed out that with such a slim margin of black voters, it opens the door for a white candidate to enter the primary, much like former City Councilman David Yassky did in running against Clarke in 2008.

A Towns spokesperson said the congressman is reserving comment for when the judges officially rule on the lines.

The official lines are expected to be released later this week (too late for this paper’s deadline).