Movements to keep New York City’s largest residential area for Americans of African descent and people of color … have been ongoing for more than 150 years. Weeksville survives.  Bedford Stuyvesant, in its many new guises and new names, thrives.

With publicity around the increasing theft of property and fraudulent practices, momentum is building to sustain a culture and community with an infrastructure, that has attracted the interest of outsiders and outliers, globally.

And so, it was on Saturday, March 19 morning, that Brownstoners of Bedford Stuvyesant, an organization that enjoys an amazing 38 year history of service, convened a powerful workshop in response to the community’s call for relief in the face of the onslaught of property fraud.

The event held at the Bedford-Stuyvesant Restoration community room, was attended by more than 350 people, an assembly of the old guard bent on holding on or retrieving stolen properties.

The event was called together just three months shy of the 10th anniversary of the “Black Brooklyn Empowerment Convention” held at the historic Concord Baptist Church of Christ . At that time Convention participants were charged with formulating an action agenda to address key issues affecting the present and future of Black Brooklyn’s one million residents.   It was the first time in more than 20 years that such a large diverse group of community leaders had come together to develop and, as Esmeralda Simmons, then and now, Director of the Center for Law and Social Justice at Medgar Evers College, Esq., said at the time, “We have to hold leadership accountable both within and beyond Black Brooklyn for representing its interests and empowering its communities.”

Last Saturday, the Brownstoners in conjunction with their diverse partners, brought community leaders together to address the issue of stolen property and fraud by lawbreakers intent on “stealing the neighborhood.”  And offered relief to hundreds seeking solutions.

Also, Next week is Participatory Budget Voting Week.  Residents will be given the chance to vote on projects for their neighborhoods – developed for and by the people.

Upcoming is the Bedford-Stuyvesant Community Tax Lien Workshop, developed by community leader and Bed Stuy native son Al Vann.  Mr. Vann and this initiative were the first to herald the storm and frame a problem – loss of homeownership in the community.

Yes, reports of the death of the presence of people of color in the largest district of its type in America, are grossly exaggerated. The first part of a report on the Brownstoners’ conference, Neighbors Keepers: Property Fraud starts below.  BG/DG  (brownstonersofbedstuy.org) 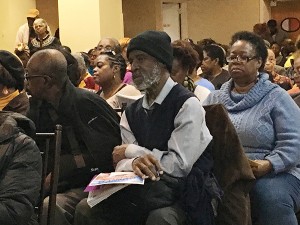 On Saturday, March 19, 2016 the Brownstoners of Bedford-Stuyvesant sponsored an essential panel discussion on real estate scams in Restoration Plaza’s 200-person capacity Community Room.  The room was packed with people curious and those victims of the scams.  Council member Robert Cornegy (CD 36) gave the welcoming address followed by Bedford-Stuyvesant Restoration Corp. (BSRC) CEO Colvin Grannum who explained the history of the area’s real estate market.  This history includes decades or redlining followed by predatory lending.  The current situation of significant investment into Bedford-Stuyvesant is a level of investment not seen before–quite possibly not since the brownstone and limestone mansions and row houses were constructed in the late 19th century.

To counter “indigenous residents” from being priced out of Bedford-Stuyvesant, BSRC established the Financial Empowerment Center in Restoration Plaza.  Mr. Grannum said, “This center is considered the most effective in New York City”.

The main event was the responses the panel members gave to questions posed by the moderator Gloria Sandiford, President of the Bedford-Stuyvesant Real Estate Board.  Sandiford explained real estate predators seek out distressed properties which are building lots in arrears of real estate and sewer taxes and/or having many uncorrected NYC Building Department violations.

Looking at the sea of faces one would notice the small number of adults in their 20s and 30s.  The majority were older adults.  Apparently, they were set on holding onto the nests they had fashioned for decades.

One recurring admonition was for people not to be ashamed to ask for help and to ask for the help as soon as a problem or questionable situation appears.  Assembly member Robinson named IMPACT, Brooklyn Legal Services and Bedford-Stuyvesant Neighborhood Housing Services as a few service providers in the area that are “here for you to access”.  Their services are free to the community because their funding comes from Community Reinvestment Act (CRA).  Attorney Gounardes echoed the need to access the resources when he said, “It is not a shameful thing to say I need help to stay in this community”.

Det. Teresa Russo implored the audience not to believe “Jesus comes in a white Mercedes and $20,000 in a paper bag”.  She said the real estate scams went by the names: “loan modification”, “short sale”, “cash for keys” and “foreclosure rescues”.  Russo cautioned against signing any papers without first having them reviewed by a lawyer of one’s own selection.  Once anyone signs a deed to another, they are susceptible to receiving an eviction notice and door locks being changed.

Richard Flateau provided the profile of the typical prey for a real estate predator: “People who are senior citizens, empty houses and houses with deferred maintenance, and financially distressed [owners and properties].”  Flateau explained that predators may “look for the weak link within a family.  This weak link can be someone with an addiction”.  He also offered two operational adjustments for the City Register Office: 1) Better quality control is needed to stop or curtail the wrong deed assigned to a property and 2) Limited Liability Companies should have greater transparency of their members.

DA Office’s Richard Farrell encouraged the audience to use nonprofit housing organizations by saying, “I’m the last person you should want to talk to”.  This is so because his office “serves victims of crimes, witnesses to crimes and someone his office has charged”.  He encouraged people to “pay attention to their own deeds.  When someone dies, update the deed”.

Where some people support the inclusion of new laws to deal with deed theft and the host of other real estate crimes Farrell contends, “We don’t need new laws; we just need to act”.

While the panel educated the audience on scams to take over other people’s property, ringing the room were tables manned by representatives from IMPACCT, Bridge Street Development Corp. and other housing and community preservation organizations.

To use funds from judgments and settlements received in cases with lending institutions relating to subprime and predatory lending, and other mortgage and real estate industry practices to help communities recover from the foreclosure crisis and keep homeowners in their home.

New York Property Law 265-a or Home Equity Theft Prevention was put into effect February 1, 2007 for the following purpose:

“The Legislature finds and declares that homeowners who are in default of their mortgages or in foreclosure may be vulnerable to fraud, deception and unfair dealing by Home Equity Purchasers…During the time period between the default on the mortgage and the schedule foreclosure sale date, homeowners in financial distress, especially poor, elderly and financially unsophisticated homeowners, are vulnerable to aggressive ‘Equity Purchasers’ who induce homeowners to sell their homes for a small fraction of their fair market values, or in some cases even sign away their homes through the use of schemes which often involve oral and written misrepresentations, deceit, intimidation and other unreasonable commercial practices.”

The meeting ended with each panel member making a closing statement.  The recurring messages were moving beyond shame to asking for help and sharing this event’s information with other people.

For a transcript of  the panel discussion, click here.