Flatbush Takes It Back Before It’s Gone 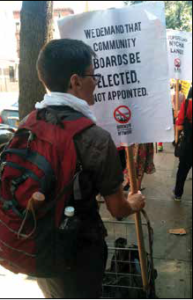 Like so many Brooklyn neighborhoods, Flatbush and East Flatbush are experiencing unsettling change. They have been known for decades as strongholds for people of Caribbean descent—English and Creole-speaking. In fact, Flatbush is known as “Little Haiti” and claims to have more Haitians residing there than in Port-au-Prince. Block after block along Flatbush Avenue (Flatbush’s key commercial corridor) and along Nostrand Avenue (East Flatbush’s key commercial corridor) down to the Flatbush-Nostrand junction, the avenues are dotted with produce stands that offer tropical foods such as negro yam, yautia, buru, papaya, pineapple, sour orange, dragon fruit and salt fish.

Back in the 1970s, the historic landmark district called Prospect-Lefferts Gardens was designated on October 9, 1979 for its architecturally distinct housing. Prospect-Lefferts Gardens Neighborhood Association (nee 1968) had operated as a neighborhood preservation company on Flatbush Avenue to respond to the residential and commercial needs of the area. One project was ensuring the route of the J’ouvert Morning revelers was a safe and joyful one.

Today, Flatbush and East Flatbush residents are facing displacement. Many people prefer to the term “gentrification” but this term literally means “the process of becoming gentry or of the middle class”. Most of the Caribbean people who moved into these neighborhoods came to the area in the 1960s for the express purpose of being home and business owners. They opened restaurants, lounges, medical offices, printing shops and other enterprises to experience the “American Dream”. They fight back the displacement with the call to “Before It’s Gone,Take It Back”. That call was coined by the activists involved with Equality for Flatbush. 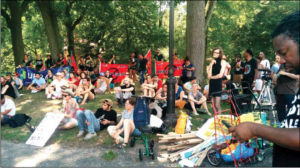 Equality for Flatbush hosted a rally on Saturday, August 13, 2016 in Prospect Park close to the entrance on Flatbush Avenue off of Empire Boulevard at high noon. On this hot and muggy day, people living in Flatbush, East Flatbush and other parts of Brooklyn rallied to decry the displacement of longstanding residents, the construction of high-rise luxury condominiums and to decry the harassment, violence and death of people of color by the hands of New York City police officers.

Imani Henry is the founder of Equality for Flatbush, which is a people-driven organization that formed in June 2013. He proudly told the crowd that 17 of the board members were women. Dressed in a black T-shirt emblazoned with the phrase, “Brooklyn Is Not for Sale” in white letters, Henry introduced the day’s speakers.

This reporter arrived as the representative for Brooklyn Movement Center made his closing remarks and Imani Henry called Nabil Hassein of Millions March NYC to the front to address the attendees who were seated on the grassy slope. Hassein talked about the Shut Down City Hall effort where people established a tent village named “Abolition Square”. Hassein said Abolition Square was a response to police aggression against black and brown people. He stated, “The police are supposed to criminalize and brutalize the black and brown community” under the current administration.

This tent village went up in City Hall Park on August 1, 2016 in an effort to remove William Bratton from the NYC Police Department Commissioner seat. Bratton had estimated resigning from the post in 2017 but instead resigned the second day of Shut Down City Hall.

Imani House Executive Director Bisi Ideradullah put the current neighborhood and housing crisis facing Flatbush and East Flatbush within the context of the domestic and international social struggles. Ms. Ideradullah encouraged people to be active and consistent in their effort. Up to recent weeks, Ideradullah Imani House at 76A Fifth Avenue was faced with business eviction along with Tabeel Aromatherapy Gifts and Salon at 76 Fifth Avenue. She made note that both establishments are owned by women of African descent and located on Fifth Avenue in Park Slope. The two fought successfully to keep their enterprises at their longstanding locations. Ideradullah directed the attendees’ attention to the Marcy Houses in Bedford-Stuyvesant. She said the NYCHA property is a prime location for renovation and tenanting by the newcomers to Bedford-Stuyvesant.

Noha Arafa, a public defender, Brooklyn member of New Yorkers Against Bratton and Coalition to End Broken Windows talked passionately about the dollars and sense of jumping the subway turnstiles. Arafa explained, “Jumping the turnstile is a misdemeanor punishable by one year in jail…For not paying $2.75, the city spends $500 to process an arrested person. Many offenders are encouraged to accept the one-year sentence”. Arafa added, “People have more time in jail than Police Officer Peter Liang, who killed Akai Gurley”.

Equality for Flatbush member Ryan Richardson informed rally attendees about Guy Hochman and his MySpace NYC growing chain of realty offices. Richardson opined, “Hochman is profiting off of a displacement business model based on working with building owners to harass existing renters to replace them with higher-income tenants and raise rents”.

MySpace NYC realty offices are located in Crown Heights and Flatbush. Richardson said, “Landlords and real estate businesses like MySpace NYC don’t want to be put on blast but that’s what we’re doing”.

The event transitioned from rally to the “neighborhood walk”. On this hot, muggy day, people of all colors smoothed on sunscreen, picked up picket signs and banners to form a long line. Imani Henry preferred calling the march a “neighborhood walk”. He advised the body that “the walk had unnamed stops in Flatbush and East Flatbush”. Not naming the stops in advance was done in order to not disturb the activities occurring at the places of interest.

The group left Prospect Park to head south on Flatbush Avenue to reach 262 Flatbush Avenue. This is the address of the luxury high rise with studios renting at $2,000 monthly; one-bedroom apartments starting at $3,000 monthly; and two-bedroom apartments starting at $4,000 monthly. Hudson Company Security did not permit the body-holding signs that read “Before It’s Gone Take It Back”, “Brooklyn is Not for Sale” and “Brooklyn No Se Vende” to enter the premises, though they had agreed over the telephone to give a tour.

Just one block and across the street from the new condominium sits MySpace NYC at 661B Flatbush Avenue. Though a Saturday afternoon, the office was closed with the front gate rolled down. The activists chanted and knocked on the gate for five minutes before walking north on Flatbush Avenue to reach Fenimore Street. Henry guided the group to the middle of the block before stopping the walk and chanting to explain how longtime homeowners and tenants on Fenimore were experiencing stops and questioning by the NYPD and increased ticketing.

The group continued walking and chanting on Bedford Avenue to Church Avenue. As they approached an outdoor prayer service within the Holy Cross Church school yard, the group became quiet and resumed the chanting yards past the scene.

Given the heat wave, the demonstrators maintained adequate energy to walk and to chant various calls. Imani Henry and other Equality for Flatbush members unfailingly distributed flyers to people along the neighborhood walk route. The end of the walk was across the street from the 67th Police Precinct on Snyder Avenue. Noha Arafa increased her fervor in the presence of the police. With bull horn at her mouth, she led the group in a call and response that ended with the phrase, “F*&k the Police”. The visit to the police precinct and chanting was due to these women, Chantal Davis and Kyan Livingston, having been killed by 67th Precinct police officers.