Part Two of a series on the disputed dissolution of Federation of Multi-cultural Programs (FMCP): This article  was reported on by The Black Star News’s Milton Allimadi, and Guerrilla Journalism’s Carolyn Jenkins and Michael Howard. It was written by Allimadi.

The order purportedly signed by New York State Supreme Court Judge Richard A. McNally dissolving a 50 year-old Black- and Latino- operated non-profit agency tending to people with developmental disabilities is missing 10 pages and the signature on it appears not to match the judge’ signatures on other documents in the same case.

It’s not at all clear if McNally signed the order since it also does appear to have the stamp of the Albany, county clerk.

Additionally, signatures on other documents in this same case, attributed to Judge McNally, appear not to always match.

Meanwhile, receivers appointed to oversee the Federation of Multi-Cultural Programs’ (FMCP) affairs have paid themselves and their staff almost $2 million since June, 2015.

In the first part of this series, The Black Star News reported that ousted executives of Federation claim their organization was a victim of a “power grab” by competitors who have since been awarded Federation’s clients and 14 buildings it owned worth about $25 million. They claim there was no financial mismanagement and that the lawsuit was a ruse.

The Black Star News sent written questions to Messrs Bruce A. Hidley, Albany County Court Clerk, and Robert D. Mayberger, Clerk of the New York State Supreme Court, Third Appellate Department, in Albany, asking them to verify whether at least three of the several documents in the case were signed by Judge McNally.

There were two different actions against Federation one with caption 400/2015 and the other 5671/2015. Some documents in the case are filed in the county court house and others in State Supreme Court at the appellate department.

A second document, is an order dated June 7, 2016, restraining Federation from signing documentation that would permit fired executives Danny King, the CEO and Beatrice Gonzalez, the human resources director, from drawing from their vested pension funds.

Unlike all the other signatures –even when they don’t seem to match– this particular signature on the July 27 document does not appear to have been executed with a black ink pen. A copy of the order was sent to Regina Felton,  a lawyer representing Federation in its appeal by James Lagios’s law firm; he’s financial receiver Nelson’s lawyer.

The signatures on all the three documents The Black Star News asked the court clerks to verify all don’t appear to match.

Jessica Barrett Secretary to County Clerk in an e-mail message to The Black Star News said: “The Albany County Clerk verifies an original Judges signature by placing Mr. Hidleys stamp below the signature.”

The June 11, 2015 McNally order appointing receiver Nelson does have the clerk’s stamp.

The Black Star News did not receive a response from the clerk at the appellate department by publication time.

“There are no findings of fact and no conclusions of law,” says Felton, the Brooklyn-based lawyer handling the appeal.

Federation was “dissolved” about eight months after the financial receiver Nelson was appointed by Judge McNally.

When the Office of People with Development Disabilities (OPWDD), the agency that funds Federation,  petitioned Judge McNally in December, 2015, to dissolve Federation –six months after the judge had appointed receiver Nelson– the state asked for an expedited process claiming Federation executives were depleting its resources.

Here’s how the fees escalated and now heads towards $2 million: Nelson paid himself a monthly fee of $75,000 beginning in June, 2015 after his appointment, then the judge approved his request to increase his fee to $102,000 per month; Nelson’s lawyer, Lagios, has been paid a monthly average exceeding $50,000; Tom Lydon, the COO of a Federation competitor, Lifespire, who was appointed the operating receiver by OPWDD in a possible conflict of interest, has a handsome monthly fee of $100,000; financial receiver Nelson also pays $26,000 per month for two armed security guards he’s placed at Federation’s headquarters; and, there are  additional tens of thousands of dollars in other fees and expenses.

What’s more, as previously reported, Lifespire was sued for $25 million last year by the mother of a mentally-challenged girl who was raped in its Harlem facility. (Megan O’Connor-Herbert, assistant commissioner of OPWDD, didn’t respond to a written question as to whether the lawsuit against Lifespire was taken into consideration before she selected Lydon as operating receiver).

Documents related to the case, in the form of a letter from Nelson’s lawyer, Lagios, to the New York State Office of Medicaid Inspector General, Division of Medicaid Audit say the operating receiver, Lydon, was an executive of a company named Manhattan Management Solutions (MMS). The Black Star News confirmed that the address listed as MMS’s was the exact same one for Lifespire.

Lagios reported to the Inspector General’s office that Lydon had discovered $1.6 million unaccounted for in Medicaid-sourced funds designated for Federation’s clients. “Is it not interesting that that figure matches the amount the receivers have paid themselves and their staff?” says King.

He adds that Federation had passed OPWDD reviews for six years in a row.

In a statement issued last week to The Black Star News in response to questions, a spokesperson for the New York State Attorney General confirmed that OPWDD had hired Lifespire as the operating receiver and that it was McNally who appointed Nelson.

The statement reads: “The financial receiver was selected and appointed by the court. The operational receiver was selected by OPWDD, based on their criteria for experience and qualifications, and appointed by the court. Fees and expenses are paid pursuant to court order. Lifespire is the temporary operating receiver. None of FMCP’s programs have been or will be transferred to Lifespire. The court is the primary oversight authority, pursuant to statute. The receivers are required to comply with Charities Bureau and OPWDD requirements applicable to FMCP’s operations.”

(Bleifer, the lawyer who represented Federation before the dissolution order claimed in a court filing that he never consented to the appointment of receiver Nelson, as Judge McNally wrote in his order; McNally later denied Bleifer’s motion to reverse the appointment).

Messrs Nelson, Lagios, and Lydon didn’t respond to written questions for this report submitted to them by e-mail message, including a question about whether any of them had a relationship, business or otherwise, with Judge McNally before the Federation case.

“These obscene fees are drawn from Medicaid-sourced funds designated for Federation’s clients. For the clients’ food and medication,” says King, the fired CEO.

King says he fears the receivers may now write even larger checks for themselves since the July 27 court order –with a signature The Black Star News asked the clerks to verify– sets no cap on the amount of money that Nelson can pay himself.

As previously reported, after OPWDD sued Federation in January, 2015, claiming it couldn’t pay its bills, OPWDD and the Department of Health (DOH) the other agency that funds Federation, both claimed that they had made mistakes in their rate calculations about 10 years earlier and over-funded Federation by $7.6 million. OPWDD and DOH recouped all the money within a four-months period by reducing funding to Federation until all the money was recovered.

This aggressive recoupment, which crippled Federation, wasn’t discussed during the hearing before Judge McNally, King says.

Even with the aggressive recoupment, Federation executives made adjustments. King, for example, reduced his own salary by $35,000.  Additionally, when OPWDD sent Federation a funding-check for $5 million King says he sent it back.  “That check I returned, plus the millions in reduced funding should have satisfied the $7.6 million recoupment,” he says. “What happened to the millions I returned? This proves that this was about taking over Federation.”

Singla didn’t return phone messages from The Black Star News seeking comment. Picker declined to comment when contacted beyond acknowledging that he did perform work for Federation and saying, “My testimony speaks for itself.”

Meanwhile, some Federation employees claim they were recently fired for suspected loyalties to King.

“I worked with OPWDD for nine years as a purchasing agent,” says, Lionel White. “My termination was based on an accusation that I cut a check for attorney services. I didn’t have the authority to do that. I had outstanding performance evaluations during my employment.  I have been promoted three times: from direct-care assistant manager to H.R. coordinator, culminating with purchasing agent.  I never took a day off.  My attorney is appealing this termination.”

White says his termination letter was signed by Judge McNally and issued by assistant attorney general Laura Sprague. He says he hasn’t been paid three weeks’ of vacation time owed.

“My termination resulted from an anonymous telephone call accusing me of attacking someone,” says a second fired employee, Parris Jones, who was an assistant manager.  He said he’d never received any complaints or reprimands during his four-years employment.

On Monday, the appellate department approved Felton’s motion to consolidate her appeals –the appointment of the receivers and the order of dissolution– and to extend the appeal deadline from July 25.  Assistant attorney general Sprague had opposed the motion.

Note to Our Time Press and Black Star News readers:
The following signatures appear on various documents reviewed by The Black Star News, in the Federation of Multi-Cultural Programs (FMCP) case, are attributed to Supreme Court Justice Richard A. McNally Jr. (The five signatures are the ones that appear above his name; not the letters that appear like BaRB, next to 6-8-16 and 6/16/15). Beginning with the top signature and going downward, they appear on the following documents: (1) A letter from assistant attorney general Laura A. Sprague signed on February 5, 2016 as “so ordered” by McNally authorizing the firing of “disruptive employees.” The name appears as Richard A. McNally, instead of Richard A. McNally Jr., as it appears on all other orders (2) Order signed June 7, 2016 restraining Federation from allowing fired CEO Danny King and human resources director Beatrice Gonzalez from access to their vested pension (3) Order signed June 11, 2015, appointing financial receiver Joseph Nelson (4) Decision and Order signed January 7, 2016 denying then Federation Paul Bleifer’s motion to reverse the appointment of Nelson and to change the Order to reflect that Bleifer didn’t consent to the appointment (5) Order dissolving Federation signed February 4, 2016 and missing 10 pages. Only a signature appears but not the name Richard A. McNally Jr. 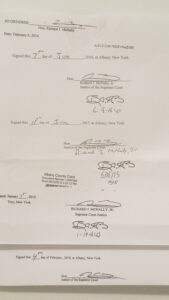