Families Remember Eric Garner on the Fourth Anniversary of His Death

They came from as far away as California and Florida. They came to remember Eric Garner, who was chokeholded to death by the police four years ago on July 17, 2018. The assemblage was organized by Mrs. Gwen Carr, the mother of Eric Garner, and myself. It took place at The House of the Lord Church in Brooklyn, NY. 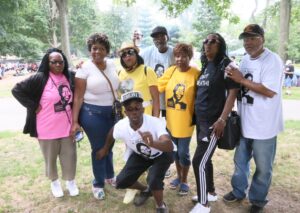 It was the fourth time that the families – predominantly mothers–have gathered at the church. For over fifty years, the church has been the sanctuary of tears, comfort, inspiration, challenge and organizing for change. From the beginning of my ministry, I felt led to minister to and work with, almost always, mothers whose loved ones had been killed by violence. Each year, they come to tell their heart-wrenching stories of loved ones murdered by the police – “the people we pay to protect us.” They were choked to death, shot in the back, etc. They were young, old, men, women, boys or girls. Invariably, in almost all instances, two brazen facts stood out:

-The police officers were Euro-ethnics. The victims were of African ancestry.

-The killer cops were exonerated.

Profusely, the mothers expressed gratitude to Mrs. Carr, Rev. Karen Daughtry, the pastor of the church, for welcoming them with love, understanding and acceptance.

One of the mothers shared how she was relieved of guilt for the way she was angry with God when her loved one was killed, but at the last commemoration, she heard me tell them that God was not angry with them, that God understood their anger; and through it all, they still had to acknowledge the presence of God. She said that she had repeated my words many times to different groups. There were many others who felt as she did and were profoundly relieved.

There was the mother whose three sons were killed in the span of two weeks. It conjured the memory of Ms. Francis Davis of Brooklyn, NY. She was a member of our organization, Families of Victims Against Violence. She had three sons who were killed within a 200-yard radius around the Marcy Projects. Her two nephews were also killed in the same area. All were killed by gun violence.  In a sense, they are representatives of the many family members of victims of whom I have maintained contact, and in some instances, close associations in church and activism.

The sister of Clifford Glover, a ten-year-old boy who was killed by the police in 1973, was present. She related how the family was harassed by the police even after Clifford’s death. Her mother never fully recovered her sanity. For years, she could not talk about the incident, but here in the church, and in the presence of others who had similar experiences, she was able to give expression to her feelings. Her deeply emotional remarks were shared by others that for the first time they were able to express openly and freely their feelings. Here, in the church, they felt comfortable, loved and protected enough so that they could talk about the pain and loneliness they have felt ever since their loved ones were killed.

Mrs. Carr recounted how her son Eric died while pleading, “I can’t breathe” 11 times, but she has continued to fight and has seen some changes. However, she said she was encouraged by some of the changes she was seeing. She said, “The mothers were instrumental in getting Governor Andrew Cuomo to sign the Executive Order, which allows Special Prosecutors to enter the case of police killings of unarmed citizens. The police have started departmental hearings of some of the officers who killed my son.” She mentioned another son who was killed in New Jersey. She vowed that she would continue the fight until police brutality and murders cease.

Mrs. Florence Miller and her daughter, Lolisa, returned from Florida. They came for the 40th Anniversary of Arthur Miller’s death. They returned for the Anniversary of the Black United Front (July 7, 2018) and the Arthur Miller Tribute (July 8, 2018). Now, they were back again. While very emotional, they were glad and grateful for the camaraderie. They promised to return next year.

In my comments I said, “I have met, and in some instances, worked and struggled with some of the world’s great men and women. However, among the top, I always placed the mothers, in particular; sometimes, fathers; and, even sometimes, children of the victims of violence. I called them ‘wounded healers.’ I can think of no greater compliment. They are hurting, yet they are helping others. They remind me of Jesus Christ, who was the ultimate wounded healer.”

After the breakfast, we went to Prospect Park for relaxation and a picnic. I was glad to see the mothers enjoy themselves. There was laughter in the church, too; and there was a lot of embracing and the sharing of life’s stories. But there was always the feeling of pain and sadness. We showed a film of another occasion when the mothers met to share their grief and for fellowship.

The park – the trees, flowers, grass and rolling hills – on a warm day and a clear sky with food and music – all of which provided a different ambiance, they laughed, joked and made fun of each other. They even danced a little to the blaring music played by the DJ. On the following day, they visited Eric’s gravesite and attended worship service in New Jersey.