SANTO DOMINGO, Dominican Republic – A few days after a disastrous earthquake rocked Haiti to its core, many Haitians in the tri-state area, boarded planes to Santo Domingo in hope of reaching their troubled country through the land border. The team of Haitian Times correspondent ran into about a dozen Haitian New Yorkers at Kennedy International airport. 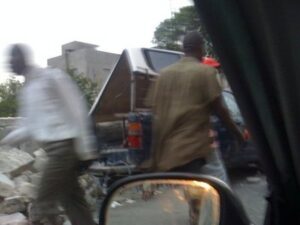 When asked why they were going to Haiti, all of them said they were frustrated at having no news from their relatives and friends in Haiti. Communication in Haiti remains sparse and the suspense was too much to bear. They boarded these planes not even sure whether they would make it to Haiti. At least, they reason, they were in Hispaniola, the island shared by Haiti and the Dominican Republic.

Everyone encountered, was in a state of shock and felt a sense of helplessness not being able to contact and know if their loved ones were alive. Seeing the mainstream media providing limited visibility of the devastation, their neighborhoods, it was beginning to frustrate people. But by making a move… trying to get to Haiti, finally made them feel as though they are making a difference. They are no longer stuck in front of the TV being fed repetitive information. They have control. They will be able to see the true devastation for themselves.

One of the people traveling with us, a well-known Haitian surgeon Dr. Lesly Guerrier, is also feeling the sense of urgency. To quickly do something and take care of his family and put his skills to help his people. His parents who took time to build their dream retirement home in Haiti, lost their home at the age of 80 years old…they lost their life long dream, their happiness. Now his plan is to get his parents out of the country as soon as possible to a safe area. Unfortunately, in Haiti you build your home on your own risk. Hurricanes, tornadoes, tropical storms are the norm but this is now unexpected territory.

Indeed, when we reached Santo Domingo, getting into Haiti was not easy. Haiti’s battered airport was closed only to rescue mission and even some of them had to travel by car to Haiti. At the municipal airport here, scores of passengers had to make alternative plans to get to Haiti. We rented an SUV and got a driver to take us in a van.

We went to a Costco in Santo Domingo and bought food and water, sleeping bags and flashlights ready to tackle on the elements on the ground, which remain a mystery to all of us. We don’t know what awaits us but we’re off to the border.  (For updates, visit.  http://www.haitiantimes.com