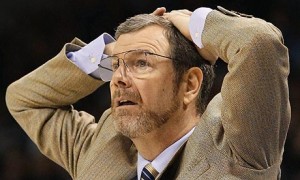 With an awful December now in the rear-view mirror, the Nets are suddenly playing better despite the distractions of a coach change and the sexual assault investigation that forward Andray Blatche was connected to and then later was cleared by Philadelphia police earlier in the week. The team is currently on a 4-game winning streak and no victory during the streak came easier then when they bludgeoned the 76ers by the score of 109-89. With Tuesday’s win, the Nets improved to 6-1 under interim coach P.J Carlesimo and what do you know, Deron Williams seems to have found his swagger once again. “D-Will” is averaging 20 points per game, 8.8 assists and is shooting 48% from the field in four games in the New Year.  The Nets currently have a winning record of 20-15, which puts them in second place in the Atlantic Division behind the cross-town rival New York Knicks. In the Eastern Conference, Brooklyn is currently holding the 6th seed. When coach Carlisemo was asked about Brooklyn’s recent winning streak he said, ” You become confident when your’re winning, and right now, we’re going good”.

The easy schedule the Nets have had as of late has been beneficial, but the next 5 games may really test them as a team with games against Indiana and back-to-back games against a pesky Atlanta Hawks team, followed by the Knicks, Timberwolves and Rockets, all of whom who are potentially playoff-bound teams. What the Nets have been doing a lot of lately is really amazing. In 4 games in 2013, the team has scored nearly 110 points per game while giving up less then 90 points per game to their opponents. For the most part, their defense, which has really been efficient all year, is still performing well with the likes of Brook Lopez, Andray Blatche, Kris Humphries and you can even throw in Reggie Evans, who had a career-high 23 rebounds Tuesday night. The offense has been impeccable of late. The question is, can the team keep up this recent offensive surge? If the Nets look to continue to win the way they have been winning, Deron Williams must become the vocal leader for the team. After all, he is without question their most explosive player on offense. It would be very unfair to expect them to score 110 points every night, however, in this league you win games by defense, and so far, the Nets have the potential to find ways to get it done on the defensive side of the ball.

As of now, it is all smiles for Brooklyn fans. The Nets seem to be back on track, but for how long? I don’t want to bring up the December they had as a team but this is where the consistency factor comes into play. According to reports, Hall of Fame coach Phil Jackson has said he does not intend to coach at all, so the man they call the “Zen Master” won’t be walking in the Barclays’ Center anytime soon. P.J. Carlisemo is doing a fine job so far as the team’s interim coach. If the team continues their winning ways Carlisemo could find himself in the same predicament as Knicks coach Mike Woodson was in last year, that is going from interim coach to the main man at the helm with a multi-year deal in play. Maybe it’s a bit too soon to make an assumption like that considering there are still 47 games left to go in the season and anything can happen from this point on. If Carlesimo can get all of his players to adapt to his coaching style and if Williams can somehow overcome the injuries he’s playing through and perform like the top-5 point guard that he is capable of being, there is no reason why Brooklynites shouldn’t expect playoff basketball to make its way to Atlantic and Flatbush.

: (Football) According to reports, the Jets have fired offensive coordinator Tony Sporano after only 1 season. Defensive coordinator Mike Pettiene will leave the Jets after 4 seasons and join the Buffalo Bills coaching staff.  (Basketball) After a very intense game against the Celtics on Monday night, the Knicks look to get things back on track as they welcome in the Chicago Bulls. The Bulls are one of 2 teams this year who have defeated the Knicks twice this season (Houston Rockets being the other team).  The Nets look to extend their winning streak to 5 games as they welcome in the Phoenix Suns to the Barclays Center on Friday night.