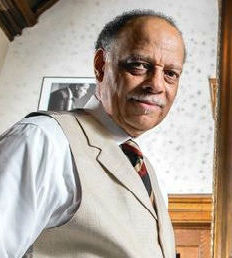 The Board for the Education of People of African Ancestry will host its 20th Anniversary Tribute to the legacy of Dr. John Henrik Clarke (January 1, 1915 – July 12, 1998) on Sunday, July 29th, starting at 3:00 PM at Mt. Pisgah Baptist Church, 212 Tompkins Avenue at DeKalb Avenue, in Brooklyn, New York, it was announced on Monday by Betty Dopson of CEMOTAP.

Dr. Clarke was an American historian, professor and a pioneer in the creation of Pan-African and Africana Studies at professional institutions in academia starting in the late 1960s. As a foremost educator, Dr. Clarke challenged people of color to “Wake up, unite and do for self.”

He said often, “To control a people you must first control what they think about themselves and how they regard their history and culture. And when your conqueror makes you ashamed of your culture and history, he needs no prison walls and no chains to hold you.”

Dr. Haki Madhubuti, the internationally known author, educator, poet and founder of Third World Press, is considered a living example of the power and success gained by embracing African culture and history as what Dr. Clarke would call a “weapon against racism and exploitation.”

Dr. Sanford, Vice Chancellor Emerita of the New York State Board of Education, is revered for her role as an advocate for students, parents, teachers and principals in both public and private education systems. She is founder of the Board for the Education of People of African Ancestry, which is housed at the Dr. John Henrik Clarke House in Harlem; it is believed to be the only existing institution of its kind.

The public is invited to join in celebrating John Henrik Clarke’s life and learning more about his legacy from distinguished scholars Dr. Sanford and Dr. Madhubuti.