An overflow crowd gathered at Medgar Evers College to welcome Dr. Joy DeGruy back to Brooklyn. They came to hear an update of her internationally acclaimed cultural theories of healing intergenerational trauma among African-Americans. Dr. DeGruy did not disappoint. Audience laughter and applause punctuated Dr. DeGruy’s journey through her ground-breaking research of post-traumatic slave syndrome and how to heal from it. 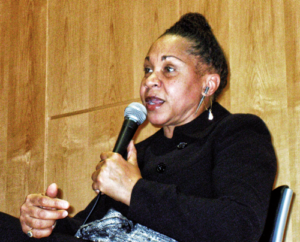 “The work itself has reemerged,” said DeGruy, with the release of 12 Years a Slave. “What we all knew science has caught up with. The international community is looking at the impact of trauma based upon epigenetics. Now they are saying that not only is there intergenerational trauma, but we also know that it impacts the DNA.”

Dr. DeGruy’s outlined her original research that looked at issues of violence, in particular 3 symptoms of post-traumatic slave syndrome: vacant esteem – not to be mistaken with low self-esteem – the foundation of self… the fundamental being and the perception a person has about that being; ever-present anger and violence (hypervigilance and exaggerated startle response that had to do with second-guessing everything and everyone in order to survive in a hostile environment); and racist socialization (issues of shame about Africa, debate about natural hair and good hair, saying “he was good-looking even though he is dark”, being light-skinned, etc.).

“We have taken on racist ideology and began to hurt each other with it,” said Dr. DeGruy. “It is us who are passing it on to children” via multigenerational transmission. “No one has figured out that we should stop transmitting that kind of foolishness,” said DeGruy. She said we need to differentiate healthy cultural transmission of our customs, beliefs and values from that that is adaptive and pathological.

In her research Dr. DeGruy looked at 200 African-American males between the ages of 14-20 over 6 years in Portland, Oregon – 100 of whom were incarcerated and 100 were not from the same neighborhood and socioeconomics. “The only thing different was racial socialization,” said Dr. DeGruy. “The cure for racist socialization is racial socialization, including rites of passage programs and culture-specific activities in schools or religious organizations.”

Daily urban hassles are stressors that are normalized in a hostile environment, such as hearing gunshots in your neighborhood, sirens, people approaching you trying to sell you drugs, trying to find a safer route home from school and work.

Dr. DeGruy described her experiences in Africa where she was welcomed home. She observed that Black people here and on the continent have a cultural value of full acknowledgment of each other which counteracts the vacant esteem of being invisible.

Her work was lauded at Oxford among her scholarly peers, eliciting the question: If epigenetics is true and real, then what have we done to them and how can we repay them?

Dr. DeGruy spoke of issues of restorative justice and equity and the necessity of circumventing chosen gatekeepers that she described as Black folk who are sick and hate themselves more than others do, including self-loathing teachers, facilitators, leaders don’t come to or live in our communities yet become representatives and spokespersons for Black people. DeGruy suggested “backroom” conversations and finding allies.

We have to understand the nature of injury and how to circumvent it, said DeGruy, and sometimes use an alternative theory such as intergenerational trauma or social learning theory which also explains post-traumatic slave syndrome.

Though her research focused on predictors of violence among young African-American males, Dr. DeGruy’s research found an unexpected result: young men had a greater likelihood of being violent as a result of the absence of mother (not only if she wasn’t there but if she was emotionally unavailable), not the absence of father. In addition, Black females are becoming increasingly more violent. Why? Because Black females also suffer from vacant esteem, ever-present anger and violence, and racist socialization.

In the Ninth Ward after Katrina, Dr. DeGruy had the opportunity to look at gender-specific survival processes by working with families as survivors. “One of the things that happens all the time is that the one group of people who were least helped or assisted were teenage girls,” said Dr. DeGruy. “Why? Because she was being parentified; no one looked at if she was hurt. There was the expectation that she was going to take care of everyone else. To the mental health professionals, the teenage girls would appear OK because they did not feel they had permission to not be.”

Dr. DeGruy explained that what has happened to Black women is they feel racism from white women, sexism and racism from white men, and sexism from Black men. “Women of color are the oppressed of the oppressed with Black women at the bottom. And who does the Black woman raise? Black children. That is the cycle of oppression,” said Dr. DeGruy. “We have folk that are broken and no one looks at the weight of what it has taken to carry all of that.”

“If you want to save the village, you have to save the women,” Dr. DeGruy said. “If she is healed, her children are healed.”