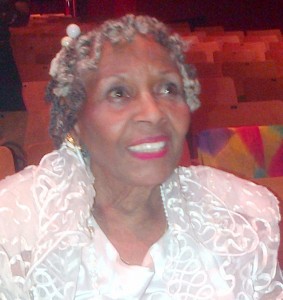 “Dr. John Henrik Clarke was a transforming person. He was able to help you to understand your intrinsic worth. Unfortunately, our young people and some of our older people know our athletes and entertainers and those kept before us on various forms of media. But they don’t necessarily know those people who have changed the meaning of who they are. Dr. Clarke was one such person. In his book My Life in Search of Africa, he was taught by teachers who believed in him.

If Dr. Clarke were alive, he would not have been surprised at the verdict. I was not surprised. I was hurt. Because if you know the history, you will understand what happened in that court. He was judged by people who knew nothing about him or family or his history.

And we with all the efforts that are made – Clarke House, CEMOTAP, the CARE Mentoring Program — we are telling the children who they are. We are helping them believe in themselves and their value by our relationship   with them, not only by talking to them and embracing them, but by listening to them and finding other people who will attach themselves to these children. That is what these supportive community based organizations do.

But in the Trayvon phenomenon, we are judged and evaluated by people who know nothing about us, the fact that Trayvon was a human being of value and character and brilliance. The people who sat in judgment of him did not know that.

That’s the dilemma that I have got to put in your hearts today. Because in addition to you valuing yourself, and valuing your children, please understand that the world that they live in simultaneously is demeaning them.

In school system,  they are not learning about themselves. They are not told of their greatness and their potential. If they can play ball or be a musician or entertainer, they can be the master of the ball. And our boys all are. And many of our girls are. But they do not necessarily write the contracts that enable them to be able to help their people and relate to their people.

Dr. Clarke was not a person who believed a great deal in demonstrations. He said we need to be able to take the energy of the demonstrations and use it in a productive way.

I went to the two demonstrations in Philadelphia because I wanted to be near the heartthrob of the people. But I kept saying to the organizers, “Who is collecting the money?” If only at every demonstration each one of us had given one dollar, think how much money we would have to be able to solve some of the problems.

More than 15 years ago when Clarke House first came into existence, I had a conversation with Dr. Clarke about some of the things we should do. He said in the first place you have got to buy more houses. You’ve got to buy property. You’ve got to own something. You have to build something where you belong there and it is yours. He said then you have to build factories, and you know what kind of factory he talked about? A paper factory. He said let’s have a factory that manufactures all of the paper products that we have to use and are repetitively being used.

Dr. Clarke had an economic understanding of how to change our dependency. We haven’t done that.

So as I look at the Trayvon Martin phenomenon and look at it through the eyes of Dr. Clarke, he would say two things: First, build an economic base. Every time you come together to have a conversation or to make a protest or to let the world know you are not satisfied with the way they are treating us. That is fine. It bothered me at these demonstrations that we used to say “No Justice, No Peace.” Now we are just talking about peace. “No Justice” has been lost. That message of saying, “No Justice.” What does justice mean? It means that I control my destiny, that I put my money where it benefits my people, that I make sacrifices for them, and that I connect with them and validate them. That is my justice. It is not a justice that somebody can give to me. It is a justice that starts first with me. I believe that the demonstrations are important, but not without a collection to help solve some of the enormous economic problems that we confront.

If you walk across Brooklyn or Queens or Manhattan, how many institutions will you come across that between the hours of four o’clock and 12 are open to teenagers? These teenagers that we are worried about shooting each other, what else do they do but roam the streets? Where do they go? The churches are closed except at the hours of worship. The community-based organizations are struggling, waiting for someone to give them a grant or a fund of some kind so that they can keep the lights on.

This is what Dr. Clarke would say. He would say let’s have some industry that supplies the basic needs of our people.

The world has known what hair products have done. The kinds of money that we have squandered trying to make our hair look like it’s not supposed to.

Sometimes we forget the congruence of the whole person. This is not the time to talk about that necessarily, but it is a time to help us understand how wasteful we have been while we are looking for someone to give us justice. Those people who we are looking to give us justice are making their living off of us. But our hair is smarter than we are because it will go back home every time.

We want to be beautiful.  I tell you that you are beautiful, and in your natural beauty you congruent where all of the parts fit together. And it is a magnificent spectacle to see. Dr. Clarke would say that.

And he would also say that until we get involved in those systems that judge our children, if you don’t get involved in saying to New York State the curriculum has to change so that the people who teach my child has respect for my child, there is a community for you to do that. But if I ask how many know your Regent and have ever written a letter saying the curriculum is omissive and distorted… We have given you that information. We told you in the Curriculum of Inclusion just how damaging it is. But if you are sitting back waiting for that teacher to be fair… If you are waiting for the members of the jury to be fair with them coming out of their background of privilege, Dr. Clarke would say we are naïve.

So in the memory of the core of Dr. Clarke, the long talks that we had at his house, Clarke House, under the Baobab trees in Egypt many, many, many times, his wisdom talked about the totality of our issues.

Dr. Clarke would say that’s our fault. We haven’t helped them to know that we are one people. There is no me and you. There is only we, we as one people.