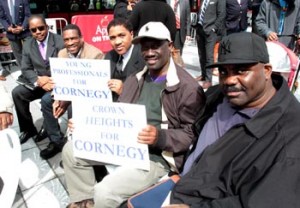 What a difference four years makes.

In 2009, Councilman Al Vann was challenged by seven candidates – including Robert Cornegy — after Vann’s council vote to overturn term limits giving Bloomberg and himself an additional four years on the City Council. Though he publicly endorsed former Comptroller Bill Thompson for mayor, Vann’s own run for a third term diluted the citywide message of “No Third Term Means No Third Term” in the 2009 race, which partially contributed to Bloomberg squeaking out a win by 4%.

After Vann won that year’s 35

“I absolutely ran against him [in ‘09] with the intention of winning because I thought I was the better candidate [due to] my passion, my youth and exuberance,” said Cornegy. “I thought that he had done a tremendous job but I wanted him to pass the baton to someone who is as passionate as he was when he began, somebody who was willing to empower and put in a tremendous amount of work.” But Cornegy said succession planning was not the reason he primaried Vann.

During that campaign, Cornegy had the opportunity to sit in living rooms and hear Vann’s legacy of achievement as a member of the Assembly and the City Council. So, when Vann eeked out a win, Cornegy’s supporters asked him who they should support in the general election. “People were hungry for a vetting process that would give them the opportunity to see who is best for continuing to serve the community. If it wasn’t me,” Cornegy said, “I was compelled to make a decision — not just for myself and my family — but for those people who had put their trust in me to win.” Because of the history he learned during that primary, Cornegy made the decision to support Vann for the general election.

When asked if a deal was cut after the 2009 primary Cornegy said, “Some of my competitors are going to scream ‘Deal, deal, deal.’ But I couldn’t have planned this. I don’t come out of machine politics, I come out of a social service background.”  The idea would be that Cornegy would work really hard to leave a legacy within Bedford-Stuyvesant of hard work and empowering people who couldn’t empower themselves. “That was my goal when I got here and that is my goal when I leave.  But there was never a deal discussed. There was never any discussion between him and I during the course of me running or after.  Anybody who knows me and knows him knows there was no deal ever cut. We’ve never spoke about that.”

To press his point Cornegy said, “When deals are made, then you coast. If there was a deal, there is no way I would work as hard as I work. No one in this race, or any race I’ve seen before or after, has put in the amount of time, sweat equity and diligence that I put in.”

Cornegy is a legislative policy analyst for the New York City Council, and writes policies for two committees – Aging and Veterans. He has also written legislation, including the council’s Occupy Wall Street resolution. He helped author the gun violence report as a member of the council’s Gun Violence Task Force. Cornegy wrote on behalf of a service member the Chin Resolution, which calls on the federal government to have better oversight over training and insensitivity to prevent hazing and harassment in the military.

As a District Leader, Cornegy is the only person of color who sits on the Rules Committee for the Kings County Democratic Committee. One of the first things he did was eliminate the practice of having 11 at-large members – a Vito Lopez initiative that marked a contentious period in County history.

“A lot of candidates are going to talk about reform, but a lot of people don’t even know what reform looks like or how it happens,” said Cornegy. “Yet, there are those of us who were going about the business of reforming institutions for the benefit of a fair and equitable distribution of power. I didn’t just talk about reform, I practiced it.”

Cornegy said none of his competitors have worked as hard as him and is out front on every single issue of importance to Bed-Stuy and Crown Heights. “During Hurricane Sandy, I partnered with TWU to bring city buses filled with people – residents from Bedford-Stuyvesant and subsequent areas – to go and volunteer,” he said. “Nobody raised the amount of money and products to donate on behalf of the love from Bed-Stuy to places that were suffering.”

Cornegy sits on the Interfaith Hospital Community Advisory Board and will chair it. He organized a bus to go to the Father’s Day march against stop-and-frisk so that central Brooklyn would have access. When others thought voter registration rolls were exhausted during the 2008 presidential race, Cornegy registered 2,000 more Bed-Stuy residents in 2012.

If elected to the City Council, Cornegy said his first priority would be undergirding small business and entrepreneurial development. “I believe what the president says: Our economy will grow not by big business, but by small business and entrepreneurship,” said Cornegy. Noting large businesses like FoodTown and Peaches as well as smaller businesses Cornegy said, “If they were given access to capital and technical assistance, then those businesses will be able to grow and hire from within the community. I would place my focus on making sure that we don’t continue to escalate utility bills and commercial taxes that price small businesses out of our communities. The economy would grow by leaps and bounds.”

On housing Cornegy said, “If you ask the average New Yorker — especially in Bed-Stuy and Crown Heights — about housing, they will tell you they will pay the market rate for housing if they have the right salary. So everything depends on earning potential. People don’t not want to pay rent and higher mortgages,” he said. “They just want their salaries to give them the ability to do that.”

Cornegy would use discretionary funding to build a small business and entrepreneurship incubator in the small-and medium-sized factories along the Lexington Avenue corridor “before somebody swoops in and turns them all into condos”.  He said he would also increase low-andmoderate-housing stock by making sure subsidies on the council level will remain available to encourage developers and owners to keep their units affordable. “I would work with the development community to create programs that are fair and equitable to keep units affordable,” he said.

Noting that long-established nonprofits are “under attack”, Cornegy said, “We lost Jackie Robinson, Vannguard and Concord. But I would fight ‘tooth and nail’ to make sure that our nonprofits can stay in ownership. I would fight to restore them under a new Speaker. I work for the City Council and will have a working relationship with whomever will be the next Speaker.”

“I believe everyone else in this race would’ve taken the opportunity to get an endorsement from Al Vann,” said Cornegy.  “VIDA already endorsed me. I am blessed to be receiving his endorsement on Friday. This is Al Vann standing before the world saying that he is endorsing his successor.”

Council member Vann endorsed Cornegy by stating: “Robert, who was also endorsed by the Kings County Democratic Party, is a proven leader whose first priority when elected to the New York City Council will be this community.” Vann continued, “Cornegy is responsible for drafting progressive legislative proposals related to aging, housing and veterans, all embraced by my colleagues in the council.  I have worked side-by-side with him on a myriad of issues such as affordable housing, quality health care and support for small businesses. I admire his boundless energy and enthusiasm for this community.”