A Connecticut woman today accused Harvard University of the wrongful seizure, possession and monetization of photographic images of her family’s patriarch, an enslaved African man named Renty, and his daughter, Delia. The images, believed to be the earliest-known photographic images of slaves, were commissioned in 1850 by a Harvard Professor, Louis Agassiz, and used to support a theory, known as polygenism, that Africans and African-Americans are inferior to whites. Polygenism, widely advocated by the Harvard Professor, was used to justify both the ongoing enslavement of Black people prior to the Civil War, and their segregation afterward. As detailed in a lawsuit filed today, Harvard stood by its professor and, to this day, has never sufficiently repudiated Agassiz and his work.

The images, known as daguerreotypes, were captured in the winter of 1850 in a South Carolina photography studio. Renty was brought to a photography studio, stripped naked and photographed from every angle; next to him, his daughter Delia was then stripped to the waist and forced to pose for the photographs.

The lawsuit filed today in Middlesex County Superior Court alleges that Harvard has ignored Tamara Lanier’s repeated requests to stop licensing the pictures for the university’s profit and stop misrepresenting her great-great-great grandfather, the man she knows as Papa Renty. A direct linear descendant of Renty, Ms. Lanier is seeking return of the photos to her family, as well as damages from Harvard. 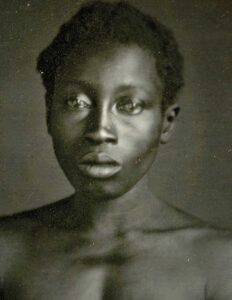 “For years, Papa Renty’s slave owners profited from his suffering – it’s time for Harvard to stop doing the same thing to our family,” said Tamara Lanier.  “Papa Renty was a proud and kind man who, like so many enslaved men, women and children, endured years of unimaginable horrors. Harvard’s refusal to honor our family’s history by acknowledging our lineage and its own shameful past is an insult to Papa Renty’s life and memory.”

“These photographs make it clear that Harvard benefitted from slavery then and continues to benefit now. By my calculation, Renty is 169 years a slave. When will Harvard finally set him free?” said national civil rights attorney Benjamin Crump, co-lead counsel for Ms. Lanier. “Without slavery, this photo would not exist, nor would the racist theories that led to its creation. We cannot erase the wrongs of the past or the legacies of slavery within higher education, but we can forge a new path of respect, dignity and equality moving forward. Returning the images would be a first step in the right direction.”

In 1847, Harvard had recruited Agassiz, whose work as a zoologist had focused on grouping living things together based on observable characteristics and placing them in hierarchical order, to head the university’s Lawrence School of Science. With the prestige and support of Harvard, Agassiz soon became a zealous advocate for polygenism.

The famed Harvard professor’s assertion of Black inferiority came at an opportune time for slave owners and northern profiteers from the cotton trade and aided their fight against abolitionists. The Fugitive Slave Act, widely seen as a barometer for the relative strength of the pro-slavery and abolitionist camps, was being hotly debated in Congress. For those seeking to prove that African-Americans were inferior, Agassiz’s work, backed by Harvard’s prestige, was an invaluable gift.

Based upon the oral history passed on to Tamara Lanier, Renty was born in Africa. After being kidnapped by slave merchants, he was enslaved on the B.F. Taylor plantation in South Carolina. Renty was small in stature but towering in the minds of those who knew him. Though prohibited by South Carolina law, Renty taught himself and other enslaved people to read and also conducted secret Bible readings and Bible study on the plantation.

In the winter of 1850, on Agassiz’s orders, Papa Renty was led into a plush photograph studio in Columbia, South Carolina. He was ordered to fully disrobe, and Delia was stripped naked to the waist. Renty and Delia were photographed in various poses, half and full figures taken from the front, side and back views. The completed daguerreotypes received just the enthusiastic reception that had Agassiz hoped. The next month, Agassiz published the results of his research in an article entitled “The Diversity of Origin of the Human Races,” noting that he had recently studied “closely many native Africans belonging to different tribes, and [have] learned readily to distinguish their nations … and determine their origin from their physical features.” He went on to describe, with the detached voice of an empiricist, the essential characteristics of Africans as “submissive, obsequious, [and] imitative,” possessing “a peculiar indifference to the advantages afforded by civilized society.”

For decades, the images were then forgotten. In 1976, an employee of Harvard’s Peabody Museum, the late Ellie Reichlin, discovered them in a corner cabinet of the

museum’s attic. Despite Ms. Reichlin’s expressed concern for the families of the men and women depicted, Harvard University chose to make no effort to locate the subjects’ descendants. In displaying and licensing the images, Harvard has avoided the fact that the daguerreotypes were part of a study, overseen by a Harvard professor, to demonstrate racial inferiority of Blacks.

To this day, Harvard insists that anyone seeking to view the photographs sign a contract, and anyone wishing to reproduce the images, even for educational purposes, pay a hefty fee to the university. In other words, Harvard – the wealthiest university in the world – has seen fit to further enrich itself from images that only exist because a Harvard professor forced enslaved men and women to participate in their creation without consent, dignity or compensation.

In 2011, Tamara Lanier, then the chief probation officer in Norwich, CT, wrote a letter to Dr. Drew Faust, the President of Harvard University from 2007-2018. Faust, a Civil War historian, was the first President of Harvard to have been raised in the South. Lanier detailed her ancestry and expressed her belief that she was a direct, linear descendant of Renty and Delia. Dr. Faust’s evasive response made no mention of Lanier’s heritage and offered no opportunity to discuss returning the pictures to the Lanier family.

Over the next several years, Lanier continued to gather documentation of her heritage and consult with genealogical experts who validated her ancestry. She also made additional unsuccessful attempts to engage Harvard University in a conversation about the images. In 2016, Lanier reached out to the Harvard Crimson, the university’s student newspaper, to suggest a news story about the daguerreotypes. The paper responded positively, and Lanier traveled to Cambridge for an interview. Sometime later, Ms. Lanier received an e-mail from an editor at the Crimson informing her that the story had been killed due to “concerns the Peabody Museum has raised.”

Harvard continues to use the Renty images as a source of income. For example, in 2017, Harvard used Renty’s image to sell its 13th Anniversary Edition of “From Site to Sight: Anthropology, Photography and the Power of Imagery.” Renty’s image is the cover of the book, which sells for $40.00. The same year, Harvard hosted a national academic conference called “Universities and Slavery: Bound by History.” The program for the conference referred to Renty as “anonymous,” even though Ms. Lanier, who was in attendance, had repeatedly told the renowned university that the man was her great- great-great grandfather.

Even though Agassiz helped lay the groundwork for over 100 years of state-sanctioned segregation, discrimination and violence against African-Americans, Harvard continues to defend him as a great scientist of his time, according to the lawsuit, and continues to profit from the images while refusing to acknowledge the legitimacy of Ms. Lanier’s familial relationship.