Death Be Not Proud: Another Victim, Another Vigil in Brooklyn 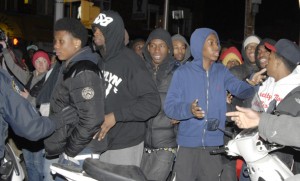 Over the weekend, NYPD officers shot and killed 16-year-old Kimani Gray in East Flatbush. Officers shot 11 times: One bullet entered his left shoulder in the rear, exiting in the front; two other bullets struck the back of his thighs, one in the left thigh and one in the right. Two bullets struck from the front, hitting his right thigh; one bullet entered his left side, striking his lower rib cage, and the last bullet hit his left lower forearm. The police version of events state Gray has a gun and pointed it at them. But, an eye witness had a different account. According to published reports, Tishana King looked out her window when she heard loud laughing and noise under her window. She said she saw a burgundy car pull up and a man jump out, then another. As Gray was backing up with his hands down, King said she saw the officers shoot Gray. King said Gray had no weapon.

A prayer vigil for Gray took place on Monday. As it was ending, a small angry group splintered off, destroying commercial property and injuring a bystander. Councilman Jumaane Williams who hosts annual events to provide young people in his district with constructive activities said, “Tonight, we saw an explosion of anger from the youth in my community. We have talked about this anger for years, but still the resources have not come to address it. We have talked about the corrosive relationship between our community and the NYPD, but still the Mayor and the Commissioner have failed to address the root causes of this tension. Tonight, we saw that tension turn on a destructive manner. I cannot and will not condone the damage caused to property or to person.”

Councilman Williams invited Mayor Bloomberg and Commissioner Kelly to his community to dialog with his constituents, which Kelly dismissed as a “photo op.” In addition, Williams said he is “calling on them to address the lack of positive outlets for young people, including the community center which we are fighting to get built. I am calling on then to commit to fully funding efforts like the Anti-Gun Violence Initiative that will bring resources to besieged communities. All of these things are needed in tandem. All of these things are overdue.

This latest shooting and the police allegation that Gray had a gun has brought up long simmering questions. Folk are asking where is the assurance that weapons turned in via gun-buybacks are actually destroyed. What assurances independent of Commissioner Kelly’s word are forthcoming? And, what assurances does the community have that when an officer obtains an illegal weapon on the streets, that weapon is actually turned in?

More and More Homeless
The Coalition for the Homeless announced NYC has a record breaking number of homeless people sleeping in the city’s shelters: 50,000, including 20,000 children. When Bloomberg first took office, the city’s homeless numbered 15,000. Bloomberg vowed to reduce that number. But over the years, Bloomberg enacted a series of policies that almost guaranteed an increase. He sued the City Council in 2003 to prevent the city from denying business to financial institutions that engaged in sub-prime mortgages. During the ensuing years foreclosures increased until the worldwide financial crash in 2008 and beyond. At one point, Bloomberg put homeless on buses and deposited them outside the city, until he got caught. Next, Bloomberg offered to homeless people one-way bus tickets to West Podunk or anywhere else in the continental United States, but there were few takers. In the meantime, the Bloomberg administration stopped a successful policy developed under mayors Koch, Dinkins and Giuliani, and began refusing direct federal subsidies for affordable housing in 2005. Along the way, NYCHA has been warehousing apartments under the pretext of upgrading, but then it was revealed that NYCHA was withholding $5 billion in federal aid to do repairs. In addition, Bloomberg has been fighting living wage and prevailing wage legislation in court, as if an adequate salary has no connection to being able to afford rent. Yet, in response to the Coalition for the Homeless report, Bloomberg said the problem is according to law the city is required to provide a bed to anyone that requests one and declared, tax payers “just cannot go subsidize everybody’s rent.”

Anti-Teen Pregnancy Campaign
The NYC Human Resources Administration (not the Dept. of Health) released a series of posters to address teen pregnancy depicting forlorn looking minority children with slogans such as “Honestly Mom… chances are he won’t stay with you. What happens to me?” and “Dad, you’ll be paying to support me for the next 20 years, and “Got a good job? I cost thousands of dollars each year,” and “I’m twice as likely not to graduate high school because you had me as a teen.” One states “If you finish high school, get a job, and get married before having children, you have a 98% chance of not being in poverty” which is not true, at all. Marriage does not automatically prevent poverty. Just ask married families living in NYC shelters.

Council member Annabel Palma, who was a teen mother herself, said the ads are blaming the victim. “I can imagine how teenage mothers across the city feel right now: shamed and stigmatized by Mayor Bloomberg’s ad campaign against them.” Council member Letitia James said, “As opposed to investing $1 million in this ad campaign, we should use the funds to better educate young people, provide sex education where appropriate, and talk about the dangers of engaging in sex prematurely, talking about reproductive rights and providing birth control when necessary.”

Assemblyman Walter Mosley stated, “While we understand the very real consequences of teenage pregnancies, we cannot root an awareness campaign in negative racial-and socio-economic stereotypes that stigmatize young parents and unfairly characterize children that come from such circumstances. Our city’s pregnancy prevention efforts should be focused on providing constructive opportunities for our youth and fostering an open and respectful dialogue on informed decision-making.”

But, Staten Island Borough President James Molinaro took it to another level when he stated the city providing food stamps, housing, welfare and Medicaid to give birth are “an incentive program for children to have children.” Molinaro called for Bloomberg to “stop rewarding bad behavior” and cut subsidies for young poor families.

Lost in the dialog is the fact that the city’s teen birth rate has steadily declined 27% over the past decade due to reproductive health information and access to birth control. In addition, the criminalization of young men via petty Class C summonses that lead to warrants inhibit the ability for young men to find work at living/prevailing wages that would support a growing family. So, what are poor, young people to do… not have children at all?