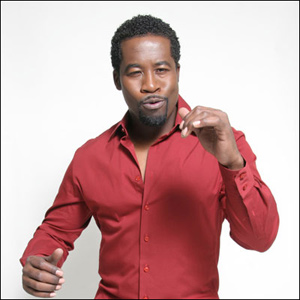 If any actor-writer’s shoes are hard to fill, it’s the pair that belongs to Daniel Beaty, the hardest-working thespian off-Broadway.

This Saturday, May 12, the hugely popular actor adds yet another multi-faceted character to his list of “long-running” cameos when he debuts the one-act play, Mr. Joy, as a New York-based Chinese shoe storeowner.

Mr. Joy runs through June 2 at The Riverside Theatre located at 91 Claremont Ave. (between 120th and 122nd Streets) in Harlem from May 12th through June 2nd.

Mr. Beaty took time from his daylong rehearsals on Riverside Drive in Manhattan to answer our questions. Then the actor whose plays Ruby Dee once said, “touch the human spirit,” was back up and running, preparing for the debut of Mr. Joy, this Saturday, May 12.
In the midst of all of this, he found time to answer the Our Time Press questions below:

OTP: In what ways does this play intend to touch the human spirit?

DB: My character (Mr. Joy) has been running a shoe store in NYC for 25 years. As he repairs people’s soles, he also repairs their souls. At the beginning of the play, we discover that something has happened to Mr. Joy that impacts the community in a deep way, and the central question of the play becomes: What has happened to this community’s joy and how do we reclaim it? Various members of the community (9 characters total) tell their personal stories through their shoes that Mr. Joy has repaired for them. This play intends to touch the human spirit by showing the power of our interconnectedness through something as fundamental as the shoes we wear. The characters I portray range from a Chinese man to a white woman from the Upper East side, to a black male Republican to a young black man who lives in Harlem.

OTP: Your plays are funny, uplifting and also have a social consciousness. What is the message that you are trying to convey with this play?

DB: My goal is always to use humor and multifaceted characters to explore social political themes. In the past, all of the characters I have portrayed have been black. This is the first time I am also including nonblack characters. There are so many urgent issues facing our society. For me the state of our young people in urban communities is in desperate need of attention. I believe it is an illusion that we as human beings are separate from one another. I deeply believe that internally we are reflections of each other no matter how different we may seem externally. When I as one man am able to successfully portray such a range of characters with true dimension, humor and heart, it underscores this idea.

OTP: Your plays seem to have a healing message for black people, for example, Run Black Man Run deals with a man who seeks a “bigger worldview” of himself and his life than the images about black men in the projects. Knock Knock is about a black boy whose father is suddenly incarcerated. Did you draw on personal experiences to delve into these topics? How do you know these people?

DB: My father was a heroin addict and dealer in and out of prison during my entire growing up period. My older brother was addicted to crack cocaine and has been incarcerated as well. As a child and young man, these were my primary models of my possibilities as a black man. As I became curious about my destiny, and what I could do to walk a different path, I understood that my father and brother’s pain was the product of unhealed wounds such as the legacy of slavery, disenfranchisement and the breakdown of the family. These wounds have deeply impacted black people in this country and our nation in general. I began to understand clearly if I was to heal, I would need to not only address these wounds for myself, but also be about the business of helping others to address their wounds—to heal.
OTP: In a recent interview, you said that you have three mantras that you say to yourself: (1) No attachments, (2) No fear and (3) I trust you, God. Please explain the reasons behind each one. (Also, with so busy a life on and off-stage, how do you practice your mantra?)

DB: My daily spiritual practice is the most important aspect of my life. Spending time with God keeps me connected to purpose and I believe purpose is the bridge past ego. By ego, I mean one’s insecurities or cockiness. I believe at the core of me and every human being is the spirit of God, the Divine that is all-powerful. My daily spiritual practice keeps me in touch with God, and this keeps me from being attached to results that often are out of my control—ultimately I cannot control how someone receives my messages. This connection gives me courage in the place of fear, and ultimately, this connection enables me to trust—to have faith.

OTP: Black writers whose works are presented on-screen —— from Lorraine Hansberry, Spike Lee, Tyler Perry and Steve Tyler — continue to break down doors for struggling writers of color. Our movies are gaining increased accessibility and popularity; the current Think Like a Man … success story is one example. How can theater keep up with the big screen with regards to building new audiences, sustaining them and, at the very least, compensating actor-writers like yourself – whose shoes are surely worn from all that walking around on and off Broadway?
DB: Theater artists must tell stories that are urgent and timely. We must challenge ourselves to be consistent in our excellence and determination. The budgets that many big budget films have enable them to market in ways theater artists simply cannot. However, I have faith that there is something so core to the way live theater can touch and inspire that if theater remains committed to telling vital, urgent stories, the audiences will come. Sometimes the journey is rocky and long, but the path I travel contains the footprints of giants who have walked before me – Lorraine Hansberry, Ruby Dee, Ossie Davis, James Baldwin, August Wilson, and the list goes on and on.

OTP: Just for the record, please briefly describe:
Your favorite pair of shoes?
DB: My favorite pair of shoes is a pair of black leather boots. They are extremely comfortable and have a weight that grounds me.
Who applies your makeup for the Mr. Joy role? How long it takes to apply it? And why it is not so far-fetched to transform an American of African descent into an Asian?
DB: I actually do not wear any makeup in my shows. I change my characters’ physicality, voice and emotional inner life, and magically the audience is able to see a new human being emerge right before their eyes.
How do you pick up accents and styles of speech?
DB: Observation is the artist’s greatest tool. I spend a great deal of time observing people, listening to how they speak, and often more importantly, why they speak. This sensitivity enables me to pick up accents and styles of speech easily.
In the upcoming season, Mr. Beaty’s ensemble musical Breath & Imagination – The Story of Roland Hayes will premiere as a co-production with Hartford Stage and Pittsburgh City Theater. He also has a new solo play on the life of Paul Robeson – The Tallest Tree in the Forest – directed by Moises Kaufman and slated to premiere next season. He is a proud member of New Dramatists and an Adjunct Professor at Columbia University. His first children’s book based on his poem Knock Knock is slated to be released by Little Brown Books in 2013. Daniel has also written a Spoken World Ballet Far But Close that will premiere in the 2012/13 season for Dance Theater of Harlem.

For a schedule of Mr. Joy performances, please call The Riverside Theatre at 212-870-6784 or visit their website at www.theriversidetheatre.org. You can also visit Mr. Beaty’s Web site at www.danielbeaty.com.

And for a sampling of “the Daniel Beaty experience”, visit www.youtube.com to see clips of his plays. One in particular that you may enjoy is, Run Black Man Run.
(Our Time Press contributor trainee B. Sadlonova provided questions for this piece. The article is available at www.ourtimepress.com and at Facebook/ourtimepress.)